BOS GUY: Nyle DiMarco shirtless. Though, he looks every bid as good gussied up:

TALKING POINTS MEMO: Maverick John McCain has waited until he is on his deathbed to actually talk turkey, and which it wasn't worth the wait, it's all very eyebrow-raising: He regrets choosing Sarah Palin as his VP (but wishes he'd chosen the loathsome Joe Lieberman), he wants his bud Joe Biden to stay in politics, and he doesn't want Trump at his funeral.

Laughably, his preferences for who should take over his Senate seat when he dies include his felon wife Cindy McCain, who has zero experience.

SNL: Last night's cold open was one of its best in a very long time, with Baldwin back as Trump, Ben Stiller as Michael Cohen, Kate McKinnon as Rudy Giuliani, Scarlett Johansson as Ivanka Trump, Jimmy Fallon as Jared Kushner, and Stormy Daniels as herself. But the best was Martin Short as Trump's fake doctor!

Giuliani smears Daniels as "woman you saw on SNL last nite trying to make more money," then adds this gem: "I know this sounds funny to people at home - I never thought $130k was a real payment. It's a nuisance payment...People don't go away for $130k if it's a meritorious claim" pic.twitter.com/WdRnFeaElp

ABC: Rudy Giuliani must have dementia. His interview on ABC Sunday was absolutely nuts. He also said — and this is coming from the party that consistently claims the Democrats are the party of the elites — that Stormy Daniels agreeing to go away for $130K shows it wasn't a meritorious claim because “people don't go away for $130K.” He punctuated that ridiculous comment by saying, “I know this sounds funny to people there at home. How relatable!”

KENNETH IN THE (212): Boyfriend twins in Speedos make out on the beach.

POLITICO: Republicans in West Virginia are so fucking stupid they're flocking to Don Blankenship, a man who served time in prison after 29 men died in one of his mines, a man who is attacking the highly attackable Mitch McConnell by saying his family is filled with “Chinapersons.” If he wins the Republican primary, he'll go up against the popular (only in West Virginia) faux-Democrat Joe Manchin, who will crush him like the apparently 29 men who died in Blankenship's mines.

PARIS VOGUE: Vogue gathers some of the stunning images from the Michael Stokes/Dian Hanson book My Buddy. World War II Laid Bare: 2nd Edition (Taschen), which is nothing but vintage images of naked soliders. Homo-erotic, eys, but the images were not created to titillate like today's Instagram thirst traps, which ... may make them all the sexier. 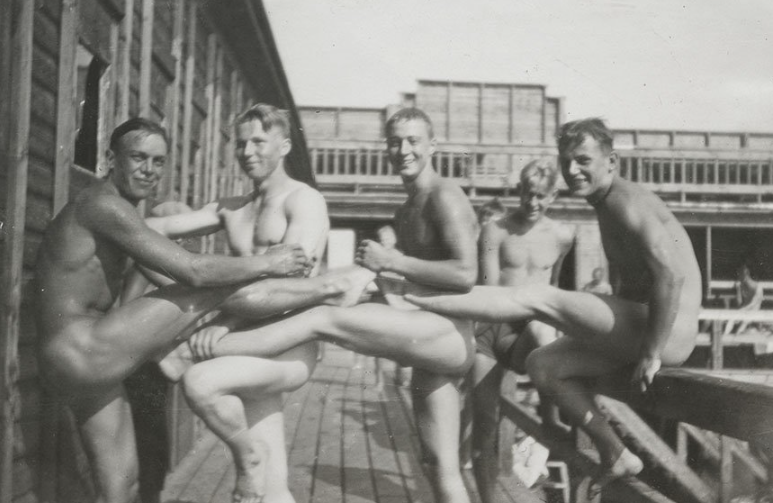 Leg day during the War! (Image owned by Michael Stokes)

TIME: Are we living in a “strongman era”?

NEWNOWNEXT: George Michael's family wants his fans to stop with the tributes.

YOUTUBE: Tom Daley tries to force hubby Dustin Lance Black to jump from a 10m board: