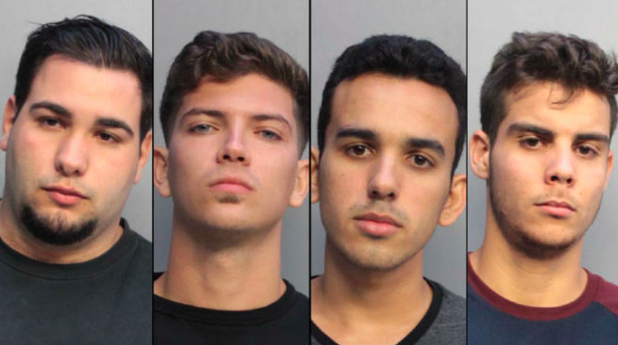 Why would they even think they'd get away with it? (Images via mug shots)

Luis M. Alonso Piovet, 20; Juan Carlos Lopez, 21; Adonis Diaz, 21; and Pablo Reinaldo Romo-Figueroa, 21 were raised to hate gay people — by their families and/or by those aspects of society they chose to obey.

Via Huff Post: Now, after senselessly beating a gay couple after Miami Beach Pride — and a straight bystander who came to their aid — the fools have been arrested and charged with not only assault, but federal hate crimes.

They could each spend 30 years in prison, their entire youth, all because they decided to beat up some gay men for holding hands.

What a miseralbe waste. And buy-buye to them. And fuck their families. (P.S. No prison-rape jokes, please; I hate those. Nobody deserves to be raped, and U.S. prisons should be run such that rape would be nearly impossible instead of a daily occurrence.)