PLAYBILL: Idina Menzel's first non-musical role in New York is the dramedy Skintight, written by Joshua Harmon. Her character discovers her dear old dad (Jack Wetherall) is in a romantic relationship with a young gay-porn actor (Will Brittain), a clear homage to Calvin Klein/Nick Gruber. Reviews are tepid, but — and forgive me for saying this about a play about superficiality — check out those thighs!

INSTAGRAM: One man's genius transformation of his dog Max into Madonna:

GOTTA HAVE ROCK AND ROLL: The house that scored a legal win over Madonna regarding that Tupac love letter is also auctioning off a mash note to Amanda Cazalet from the “Justify My Love” video (or doesn't it make more sense it's Amanda de Cadenet, who was married and with a baby at that time?) that makes clear Madonna wanted to kiss her right on the Paris: 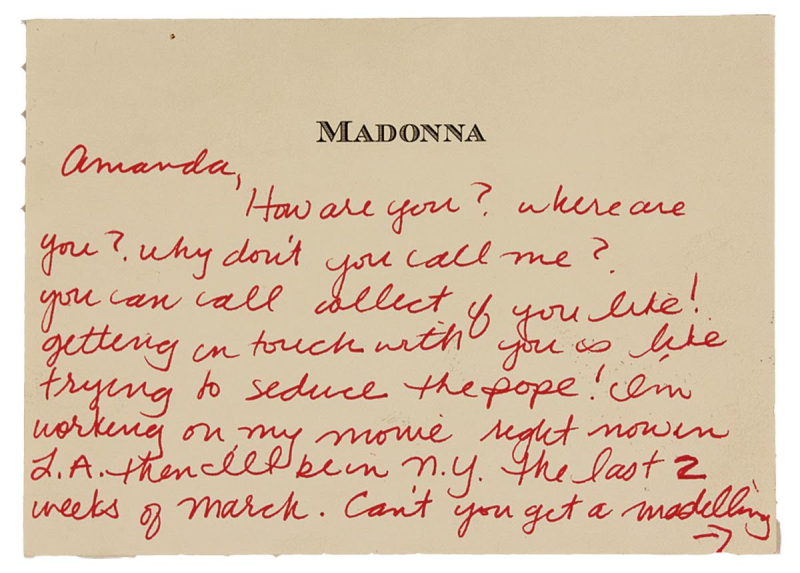 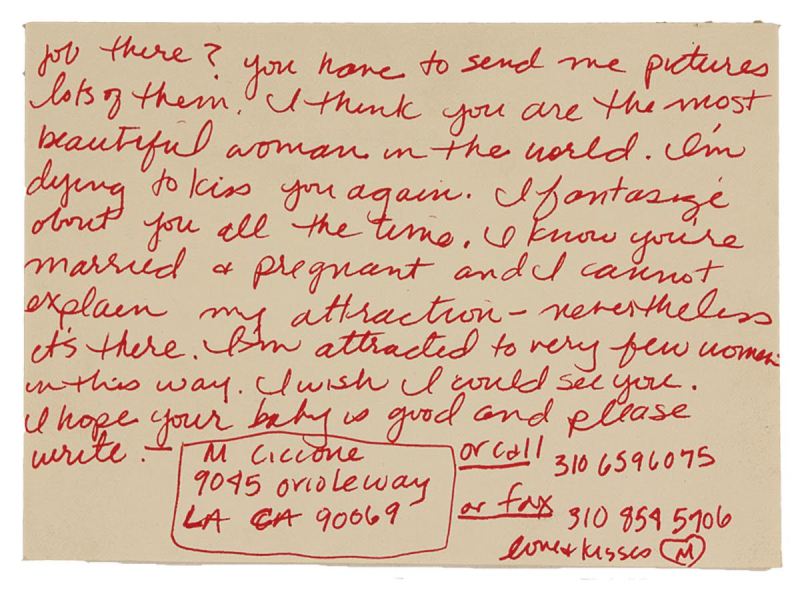 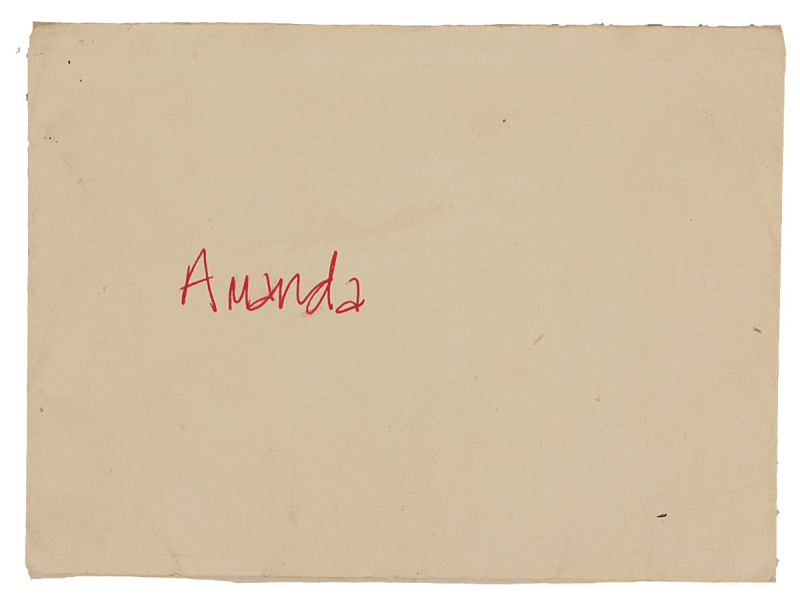 (Images via Gotta Have Rock and Roll)

DLISTED: Lil' Kim pulls a Mariah on Nicki Minaj — she don't know her.

WHAT WOULD YOU DO?: The popular gotcha show tackles the topic of businesses denying service to gay people based on so-called religious freedom, above. 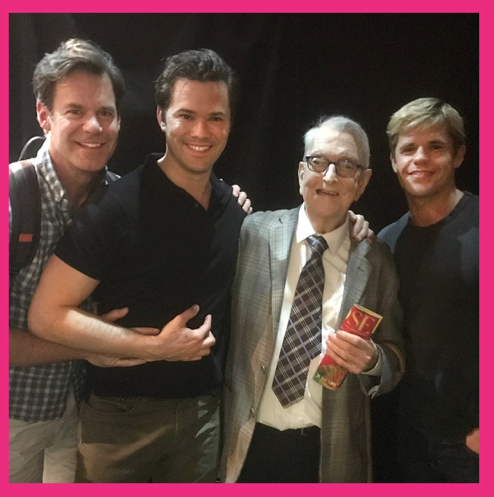 NYT: Pioneeering gay activist Dick Leitsh — who just visited The Boys in the Band in May and posed for a photo with some of its cast — dies @ 83:

Dick Leitsch, who in 1966 led a pioneering act of civil disobedience to secure the right of gay patrons to be served in a licensed bar, helping to clear the way for gay bars to operate openly in New York State, died on Friday at a hospice center in Manhattan. He was 83 ...

A gentle, soft-spoken Kentuckian, Mr. Leitsch (pronounced LIGHTSH) was one of the first leaders of the Mattachine Society, an early defender of gay rights when homosexuality was mostly underground and even a small protest took courage. He called his action a “sip-in,” and likened it to sit-ins by black protesters at segregated lunch counters in the South during the civil rights movement of the 1960s.

TWITTER: Kathy Griffin hosted Stormy Daniels at her Boston show, and their photo op was straight up yours:

. @StormyDaniels it was an honor to have you at my Boston show tonight. I support you 100%! #FuckTrump pic.twitter.com/MSPQBy18yh

CBC: A French woman visiting her mom in Canada went for a jog that took her slightly over into U.S. territory by accident. She was detained by ICE for two weeks. The phrase “make America great again” will be the Democrats' slogan in 2020, but I'd settle for making it just okay.

KENNETH IN THE (212): A review of Book of Love's 30th-anniversary tour. I remember “Pretty Boys and Pretty Girls” (among several others) vividly; just hearing it made me feel being gay was cool AF. That it only hit #90 on Billboard's Hot 100 was part of what forever disenchanted me with the charts after having following them (and written them down!) religiously from tot-hood. 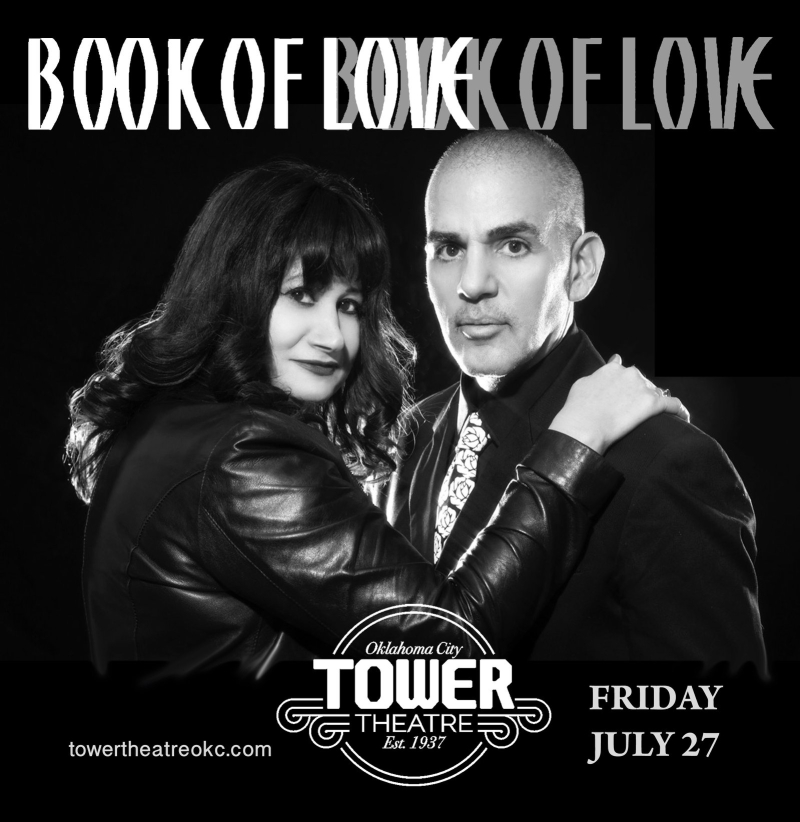 A future show on the tour (Image via Facebook)