Below: Pride-tastic pics, Chris Matthews goes ape over SCOTUS, 10-year-old murdered after coming out, K-Pop has a new gay star, Daniel Franzese is single again, and much more ...

DNA: Unapologetic expressions of Pride may seem cheesy, but will they when the Supreme Court reneges on gay rights and we lose our right to marry? To have gay sex? To be gay? These images take on new, poignant meaning in light of the day's dark news.

THE HILL: Chris Matthews just went all Chris Matthews over the SCOTUS gift Kennedy handed Trump — and for once, he is 100% right: Dems MUST unite to block and obfuscate. Go all out, try to lure Republican senators into the party, do whatever it takes. If Dems don't fight, they'll lose much worse later on.

NBC NEWS: 10-year-0ld Anthony Avalos was found critically injured in his own home and later died. His death has been called suspicious, with evidence that he was sexually and physically abused — and a report he had come out as gay before his death. 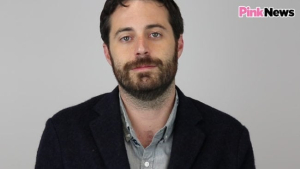 PINK NEWS: Garrard Conley was sent to Love in Action, a gay conversion center, in Memphis, Tennessee, as a teenager. Now, he talks about forgiving his father for condemning him to the cult.

PUBLIC SEMINAR: A gay scandal that rocked the U.K. in the '70s has resurfaced thanks to a BBC movie about the sordid affair, in which a Liberal leader was acquitted on conspiracy to murder his secret male lover.

EXTRATV: Joe Jackson, patriarch of the Jacksons who was accused of physical abuse by more than one of them, has succumbed to cancer at 89. He is being remembered lovingly by his kids in spite of his reputation:

DAILY BEAST: Then there is Anton Krasovsky, who is planning to run for mayor of Moscow in spite of being openly gay:

Last month, speaking on independent radio station Echo of Moscow, Krasovsky revealed the news: in September he would run for mayoral election in Moscow, if the authorities allow him to. (He is registered as a candidate but to actually take part in the election he will have to collect signatures of 110 municipal deputies before July 3.)

“I almost pissed my pants when I decided to run for Moscow mayor,” Krasovsky admitted to The Daily Beast in a recent sit-down interview in one of Moscow’s hip coffee shops, Coffeemania. Here, in Moscow’s old town Kitai Gorod, many recognized Krasovsky’s face.

I'm wishing him all the best for his success — and his safety.

KENNETH IN THE (212): Daniel Franzese is back on the market after calling off his two-year engagement to Joseph Bradley Phillips.

PEOPLE: Would you let this woman search through your phone?!