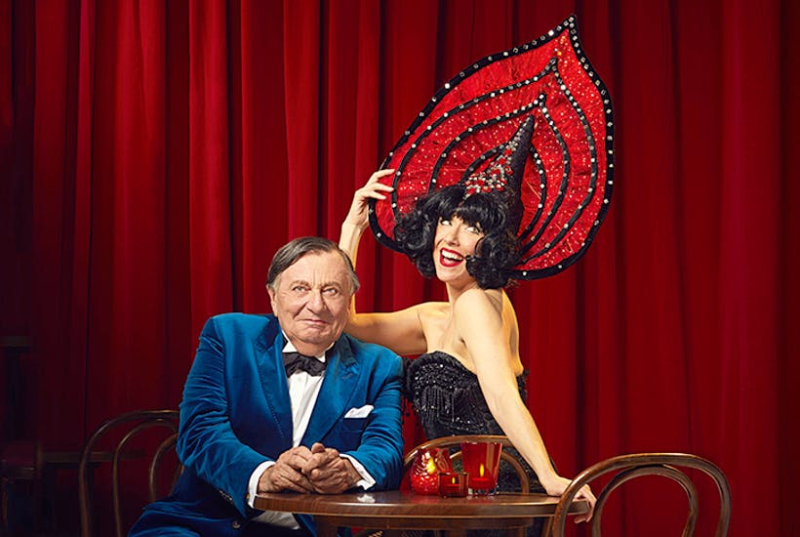 Feminists and trans activists sometimes argue that drag is inherently a joke against them, and against gay people, not with us all. Disagree! But in Humphries' case, they were right. (Image via Barry Humphries' Weimar Cabaret)

This is a huge disappointment, and I had missed his previous comments, but Barry Humphries has made some shockingly anti-trans statements in a new interview, statements that really outstrip the unfortunate/arguably insensitive comments that are routinely called out by the trans community and their defenders.

In other words, this isn't PC vs. non-PC territory, this is outright hostility ...

In a new interview, Everage reasserts his belief that trans women are nothing but self-mutilated men, and calls teachers for telling children that being transgender is a thing:

He also slams the bathroom debate in a way that makes it clear he thinks trans people should be forced to use bathrooms based on their birth sex:

... a fashion — how many different kinds of lavatory can you have?

Really sad. I'm sorry I spent money on his Broadway show, especially considering his humor is gay- and gender-related. Even weirder, his latest show is all about the wonderful period in Germany just before WWII, and is apparently a celebration of that free-wheeling time.

Oh, and Humphries is one of those utter morons who blithely sweeps Trump's actual policies under the rug by instead cheering on his institutional iconoclasty:

I’m grateful to Trump for stirring up politics. And I won’t be joining any marches against him.

I guess this is what happens when straight men become famous for doing drag. Milton Berle was similarly disgusting toward RuPaul, recall?