People say not to be so sensitive — but when guys like this are slurring us ... (Image via TedHickman.com)

The vice-mayor of Dixon, California, Ted Hickman, wrote an op-ed that declared July to be SPAM, “Straight Pride American Month.”

It was adorned with a circular rainbow insignia with a slash through it.

In the write-up, Hickman expressed his contempt for gay people in every way: 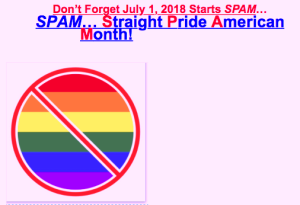 Amendment, as much as the next person, and support the rights of grown men to wear skin tight short-shorts and go-go boots and don tinker bell wings with wand and prance down the streets of San Francisco) with tens of thousands of folks dancing and prancing all over American celebrating the fact they are different than most of the rest of us and showing their “pride” in being so.

He went on to state that gay people are unhealthy and don't work hard:

Now hundreds of millions of the rest of us can celebrate our month, peaking on July 4th, as healthy, heterosexual, fairly monogamous, keep our kinky stuff to ourselves, Americans… We do it with our parades in every state and county in this country with families celebrating together. We honor our country and our veterans who have made all of this possible (including for the tinker bells) and we can do it with actual real pride, not some put on show just to help our inferior complex “show we are different” type of crap. We ARE different from them…We work, have families, (and babies we make) enjoy and love the company (and marriage) of the opposite sex and don’t flaunt our differences dressing up like faries and prancing by the thousands in a parade in nearby San Francisco to be televised all over the world… *

According to ABC10, there is some outrage brewing over Hickman's hick remarks:

A LGBTQ Pride Day is being planned in Dixon for July 21. More than 70 people have shown interest in attending on a Facebook event page.

There is also a protest planned for the next city council meeting July 11 in Dixon. Information for that event can be found here.

Amazing that people like this are still around, though it would appear their time is coming to a close — that's why they're flailing in such vulgar and graphic ways = death throes.

Hickman defends his column as First Amendment-protected, a typical misunderstanding of the First Amendment. He is now the subject of a recall campaign.