ATTITUDE: Singer Jason Mraz discusses his love of men and women, chalks it up to Two Spirits rather than straight-up bisexuality.

But Cher wasn’t always as involved in the LGBTQ community as she is now. In a recent interview with GLAAD ahead of the release of Mamma Mia! Here We Go Again, Cher revealed that she met gay people for the first time when she was 12 years old and living with her mother, Georgia Holt. “I came home from school and there were these two guys in our living room,” Cher recalled. “They were talking to my mom and her best friend, and they were so happy and excited about everything they were talking about, so animated.”

The icon elaborated, saying that their energy and general enthusiasm was so infectious that she began emulating them from that early age. “I thought, ‘These guys are much more fun than the regular men that come over to visit,’” she said. “And I didn’t know that they were gay, but I just thought ‘These guys are great,’ and it all started from then.” 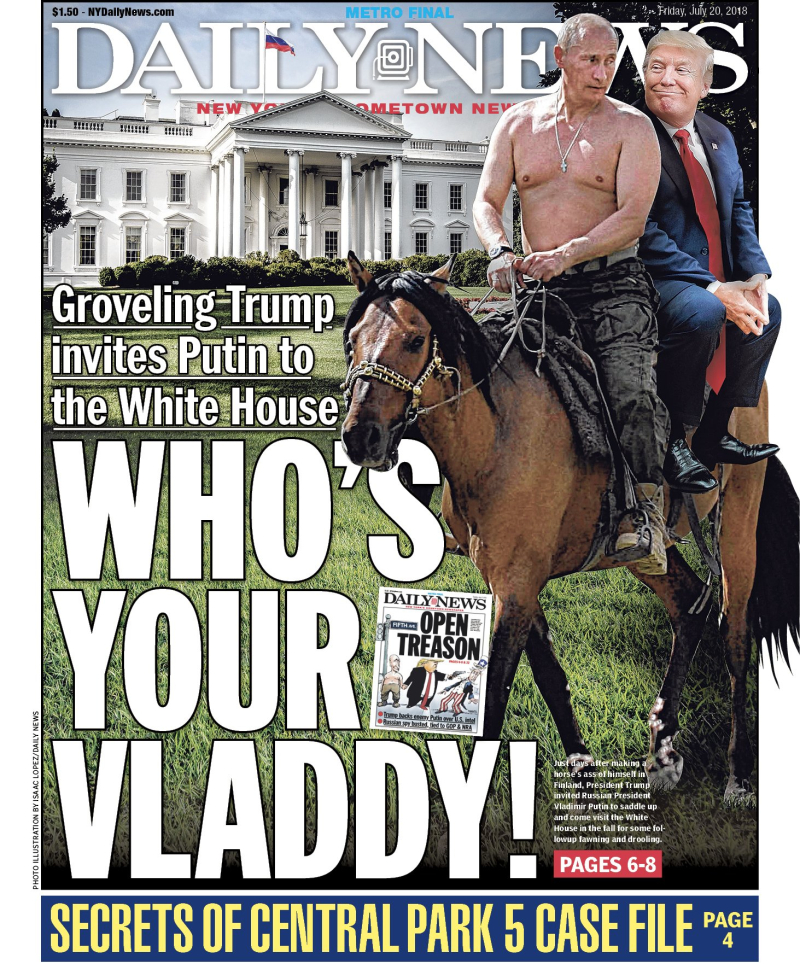 The joke is not that they're gay. Why can't LGBTQ activists see that? (Image via NYDN)

HUFF POST: The New York Daily News skewers Trump over his bizarre and counterproductive invite to Putin. Putin hacked our election, now we're inviting him over to the White House? And P.S. I'm not buying the concerns that these types of memes are anti-gay. Here is why.

POLITICO: Prominent RussiaGate skeptic isn't a skeptic anymore, not with the avalanche of evidence emerging that Trump knowingly conspired with Russian agents to win the U.S. election. Unless it were proven that votes were fabricated, I would not waste time supporting a do-over, but if it's proven that Trump and his associates did this, it's illegal, it's treason, and it is not just impeachable, it's mandatory to impeach him. To do anything else would jeopardize the U.S. system.

NYT: Trump talked with his lawyer, Michael Cohen, two months prior to the election in 2016 about payments to a Playboy model who claimed she slept with Trump. Cohen recorded it, and the FBI has it. Trump's new lawyer, Rudy Giuliani, says it proves Trump did nothing wrong.

MSN: At least 17 people died when a Ride the Ducks tourist boat capsized on Table Rock Lake outside Branson, Missouri.

VARIETY: Kathy Griffin really got into it with Ellen DeGeneres over Joan Rivers — and it's why they no longer speak: 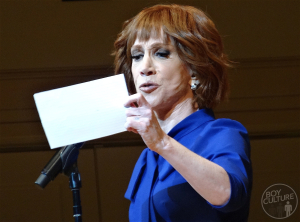 “One of the things that really hurt Joan, and we talked about it at our last meal together, was that Ellen always shunned her and Ellen thought she was vulgar and not funny,” Griffin said, noting that DeGeneres thinks she’s also too vulgar. But when Rivers died, Griffin wanted to reach out.

“I just called her and I just said, ‘Look, woman to woman, comic to comic, I think you need to let go of your hatred for Joan Rivers. She’s passed away, just do a f—ing tribute, be cool,'” Griffin said.

But according to Griffin, DeGeneres wasn’t having it and responded that “there’s a difference between mean and funny” and Rivers was mean.

“That f—ing set me off,” Griffin admitted. “So we had a fight in which I used inflammatory words like, ‘Look you f—ing untalented hack.’ … You know when you’re fighting with someone and you can kind of laugh at a point? Yeah, not that day.”

I was not a huge fan of Rivers always myself. I definitely respected her in many ways, but I can see why she wasn't Ellen's cup of tea. At the live show Rivers did that I saw, she joked about the Haitian earthquake, and it had just happened. People were still buried alive, and she was joking about how ugly the people in Haiti are. I never bought her (or anyone's) line that comedians are always laughing to keep from crying. She was brilliant and funny and wonderful in many ways, but she definitely did, at times, say things — especially as she aged — just to be mean and to shock, things that she may not have meant, but that were not exactly jokes or funny. Also, she was a Republican, which her fans never like to talk about. But regardless, she gave a lot of pleasure to people, it sucked when she died, and while I would think Ellen wouldn't hold on to ill will after the woman passed away, I also think Kathy has no real reason to badger her into doing a tribute. I guess I'd say of the three, Ellen's my favorite, even though she can be milquetoast in her humor. How's that for who asked ya?