Robert Van Hook, Who Murdered David Self In 1985 And Later Tried A Gay-Panic Defense, Executed In Ohio Comments (0)

Robert Van Hook, who made his living in the '80s robbing gay men he met him bars — and who wound up savagely murdering one — was finally put to death in Ohio this week, 33 years later.

Van Hook, a veteran of the military, strangled David Self unconscious, stabbed him in the back of his head, then pared him open and left a cigarette butt and the murder weapon inside the wound. He actually tried a gay-panic defense recently to forestall the inevitable.

Self's surviving friend Troy Lynch spoke to local media about the crime, saying he remembers Self every day:

On his blog, Lynch — who in the above interview speaks of forgiveness (he's against the death penalty and against life sentences) — calls out, not by name, a mutual gay acquaintance who had been robbed by Van Hook and who had never reported it out of fear for his own future: 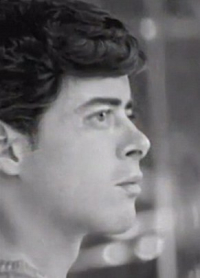 I was able to go back to school after a week. The first class of my day was a history class. A friend I’ll call Jeff was in the same class. When he saw me he said he had heard about what had happened. By this time the suspect had been identified as Robert “Bulldog” VanHook. Jeff then told me VanHook had robbed him in Burnett Woods the previous October. I asked if he had reported it then, and with an incredulous look he said “I’m an Education major, I can’t have my name associated with Burnett Woods!”

... I have always wondered “What if Jeff had reported his robbery? Would David still be alive?” Making things worse: Jeff never became an educator, he never even finished college; he’s a waiter in a gay restaurant in Columbus, Ohio. There are those who contend that it’s nobody’s business if someone wants to remain closeted but my personal history makes me believe differently.

It's a compelling point about how the closet is selfish, and yet eventually hurts us all as a community, including those who benefit from it in the short run.

The entire story is sobering; considering the idea that Van Hook may have been a tortured gay man, that he lashed out and murdered a happy gay man in response, and all the lives affected, is a troubling scenario to digest.

I'm not a fan of the death penalty because it is so unevenly applied and like the rest of our justice system that application is demonstrably racist, but when someone is guilty beyond all doubt, not just a reasonable doubt, of a crime as heinous as this, I'm not sure understanding what motivated it mitigates the positive outcome of ridding the earth of the person who did it. I would probably vote for the death penalty to be abolished, but I wouldn't waste any tears over a person who did something as depraved as what Robert Van Hook did.