Above: Geovany Zambon has tongues wagging.

Below: Keep reading for sexy Nick Sandell in his skivvies, two pro athletes coming out as gay, a gutsy dare from Maxine Waters, the glow I get from Glow, and more ...

I look at modeling as art, and when I get a great photo with a photographer we both high five each other like we scored a touchdown. Provocative images are hit or miss, and in my opinion are more rewarding when we get the right shot.
It does not surprise my popularity in the gay community because I have always worked with companies and photographers within that specific demographic, and surround my career within that community.

Tonight my team, @MNUFC , is having their Pride night. It's an important night for me — I'll be announcing that I am an openly gay player in Major League Soccer. #soccerforall pic.twitter.com/cOJQXfrBiv

INDY100: Collin Martin, a Minnesota United midfielder, came out as gay Friday, ahead of his team's annual Pride match. The soccer player's coming-out makes him the only current pro athlete in any of the five major U.S. athletic leagues to be on the record as gay.

Collin proud of you and what you stand for. Love dad

The first Swaziland Pride is over and it was a HUGE success! The community and their allies painted the streets of this country rainbow, with a beautiful, colourful parade that was literally exploding with joy. #eSwatiniPride #SwazilandPride pic.twitter.com/w2Wl2UGeCp

SALON: I will personally body-slam you if you're not watching 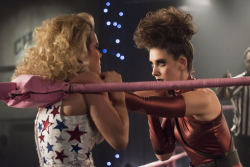 Glow! Best show. Best! This season has a timely (and yet period-appropriate, considering the show's set in the '80s) #MeToo plot twist, one that fits neatly with what series star Alison Brie says is an overall misunderstanding of how a show with a bunch of women in leotards can be feminist:

... Brie recalled a low point of doing press interviews last spring for the show’s first season. “We were constantly getting asked [questions] like, ‘So you're saying it's empowering, but you're wearing nothing?’”

“But then,” Maron interjects, “do they watch wrestling, though?"

“These were clearly people who had not really seen the show or didn't understand it,” Brie said. “Always these questions were asked by male journalists. But they had only seen our trailers. They were trying to imply that we were sexualizing or sexually exploiting ourselves for the sake of our show. And we were like, ‘that's not what the show is about at all. You're missing the point.’”

Season 2 also features a sweet lesbian love story and a not-so-sweet exploration of a closeted gay character dealing with the sudden loss of the object of his desire to AIDS.

INSTAGRAM (FOLLOW IF YOU LIKE NOSTALGIA): A slew of famous names had birthdays today — some of them alive to celebrate (Debbie Harry, Leslie Caron, 102-year-old Olivia de Havilland), and others gone but not forgotten (Karen Black, Charles Laughton, Princess Diana).

One queer birthday of note: Today would've been Farley Granger's 93rd (he died in 2011). Great actor who excelled in two Hitchcock movies, and who came out before it was chic, immortalizing his career in the 2008 must-red memoir Include Me Out. He had an affair with Arthur Laurents, also now deceased, that must've been ... tempestuous.

GR8ERDAYS: Why Tootsie (1982) still matters, Roseanne's whacky reason for allegedly taking no money in that The Conners deal, Neil Diamond coming back, and more!

JOE.MY.GOD.: Rep. Maxine Waters (D-California) double-dog dares those issuing death threats against her for calling out Trump and his cronies:

All I have to say is this: If you shoot me, you better shoot straight. There's nothin' like a wounded animal .. I am not about to let this country go by the way of Donald Trump. How dare you ... how dare you ...

'If you shoot me, you better shoot straight. There's nothing like a wounded animal.' — Rep. Maxine Waters had a powerful message for those threatening her #FamiliesBelongTogetherMarch pic.twitter.com/yvLQqbVLKr

EXTRATV: TV icon — well, she is! — Heather Locklear is set to enter rehab

CBS NEWS: Stuttering John faked his way through to a call with Trump, pretending to be Sen. Bob Menendez (D-New Jersey). The call is fascinating in its content; for one, Trump seems very sympathetic to Menendez, who beat a corruption wrap. Now, the feds are after John — but he has a lawyer you may've heard of:

I have just spoken to my new attorney @MichaelAvenatti who has agreed to represent me on this. Stay tuned.