Girl Not Erased: A Review Of THE MISEDUCATION OF CAMERON POST Comments (0) 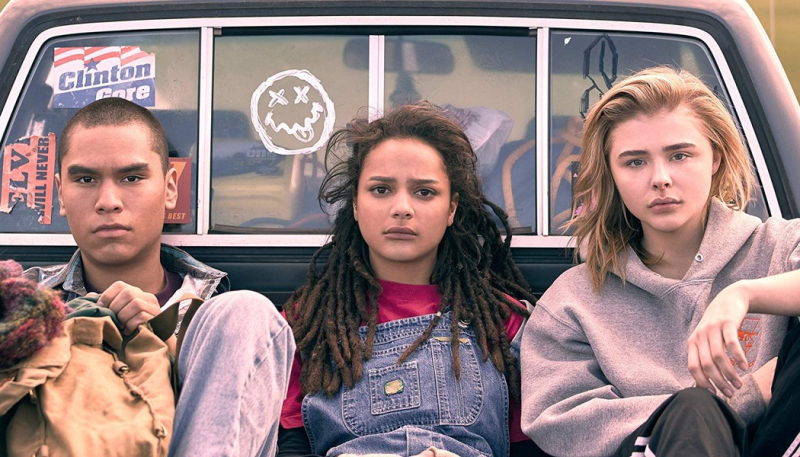 UPDATE: Available on all digital platforms on Nov. 6th; DVD and Blu-ray on December 3rd

The '90s-set The Miseducation of Cameron Post, directed by bisexual Iranian-American filmmaker Desiree Akhavan (2014's Appropriate Behavior), tackles conversion therapy, but does so through a queer lens — and it does not compartmentalize by shortchanging its characters in the areas of humor or sexuality.

female friend when the two are caught having sex in the back of her male date's car at a school dance. Her friend suffers no consquences, but Post's religious aunt (Kerry Butler) — who is raising her following her parents' deaths — carts her off to a conversion therapy camp meant to set her straight.

Cameron, who at first seems cool and way above the camp's alternatively abusive and juvenile attempts to condition teens to deny their true selves, is more at-risk than she knows. After all, there is genuine love between her and her aunt, and she is tired of feeling like she's doing something wrong. That she displays this vulnerability under her at times steely facade is one of many reasons she is a remarkably relatable hero; she is someone we are rooting for, but she does not have all the answers.

These ex-gay camps have been depicted in popular culture before, and because they are inarguably horrible, with conversion therapy becoming illegal in more and more states, they're usually shown in cartoonish strokes. In Post, while the camp's director — Nurse Ratched-ready Dr. Lydia March (Jennifer Ehle) — is a twisted sister, her employee/brother (John Gallagher Jr.) is seen as a flesh-and-blood human being who is genuinely conflicted in reconciling his faith with his sexual orientation, an almost clueless participant in an unholy war against nature. Showing that some of the people working at these camps are themselves victims is a brave choice, and one that pays off.

The kids Cameron encounters run the gamut from the brash, sexually demonstrative, possibly self-dubbed Jane Fonda (Sasha Lane) and her sarcastic 2S pal Adam (Forrest Goodluck) to Mark (Owen Campbell), a kid whose father reviles his feminine traits, with disastrous results. Cameron also has an unlikely bond with her roommate, Erin (Emily Skeggs), a butch sports fan desperate to leave her lesbianism behind like she's been traded to the straights.

There are laughs in spite of the tension in the camp, and also sex, depicted unflinchingly and, for a change, correctly! As the film's cinematographer noted at a recent talkback, teen girls having sex for the first time shouldn't be scissoring champions. This kind of attention to detail is one of many tip-offs that this is not just a queer film, but a film by queer people.

Overall, the struggle inside the camp is clearly not something that can easily be left behind, but some of the teens imprisoned there will try. Is the outside world ever going to embrace them? Some have given up hope for that, while others are willing to risk everything to find the answer.

The Miseducation of Cameron Post is not a polished, disease-of-the-week Hollywood treatment of this important topic, but a thoughtful, emotionally messy look at the larger issues that created conversion therapy camps. And just like Desert Hearts, the 1985 lesbian romantic drama Cameron and her girlfriend are shown watching in the movie, it is an indispensable and unforgettable feminist queer film likely to give hope to many.

The Miseducation of Cameron Post is in theaters now.