ABOVE: Obviously, most of the comments on the above are something to the effect of “daddy!”

DNA: Mark Keerati, as shot by GAMMAOTO, may have the most perfect physique ever.

RAW STORY: With friends like Meghan McCaleb, embattled SCOTUS nominee Brett Kavanaugh has a long way to go. Her shaky interview — on the very friendly FOX — did little to assuage fears that he may have attempted to rape Christine Blasey Ford.

PAGE SIX: The real reason Mark Burnett went after Tom Arnold at that pre-Emmys party? Arnold told Burnett that Ronan Farrow has the fabled audio of Trump using the N-word. And apparently also calling his own son, Eric, a “retard.”

THE GUARDIAN: In her upcoming book, Stormy Daniels describes sex with Trump — and it does not disappoint:

Trump’s bodyguard invites Daniels to dinner, which turns out to be an invitation to Trump’s penthouse, she writes, in a description of alleged events that Daniels has disclosed previously but which in the book are rendered with new and lurid detail. She describes Trump’s penis as “smaller than average” but “not freakishly small.”

“He knows he has an unusual penis,” Daniels writes. “It has a huge mushroom head. Like a toadstool…

“I lay there, annoyed that I was getting fucked by a guy with Yeti pubes and a dick like the mushroom character in Mario Kart...

“It may have been the least impressive sex I’d ever had, but clearly, he didn’t share that opinion.”

Daniels’ alleged relationship with Trump included one moment in 2007, she writes, in which she is with Trump in a hotel room watching a Shark Week broadcast on cable television when he receives a phone call from Hillary Clinton, then running against Barack Obama for the Democratic presidential nomination.

“Then, to make it crazier, Hillary Clinton called,” Daniels writes. “He had a whole conversation about the race, repeatedly mentioning ‘our plan’...

That painfully specific detail about his cock should put any doubt in Melania's mind to rest. (And yeah, the part about Hillary chatting with him during her primary battle with Barack Obama is gross, too.) 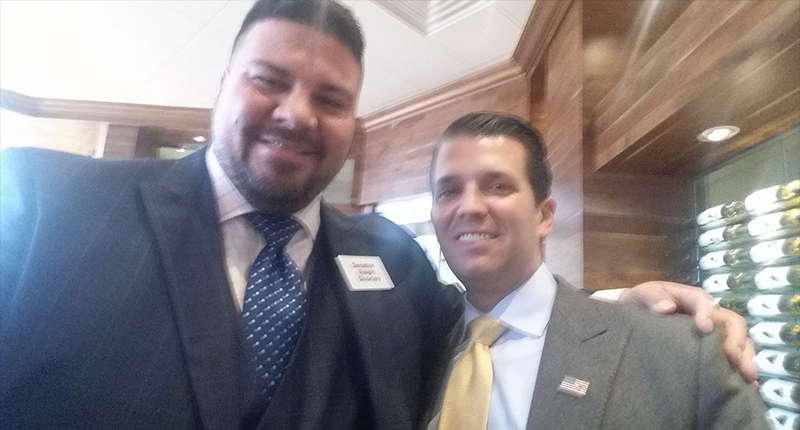 JOE.MY.GOD.: Former Oklahoma state Sen. Ralph Shortey has been sentenced to 15 years for sex trafficking a 17-year-old boy. He was a Trump campaign chair, and at the time of his arrest was wearing a T-shirt with a Bible verse about how wives should submit to their husbands!

EXTRATV: The Emmys sucked, but that impromptu wedding proposal was so adorable and so real. 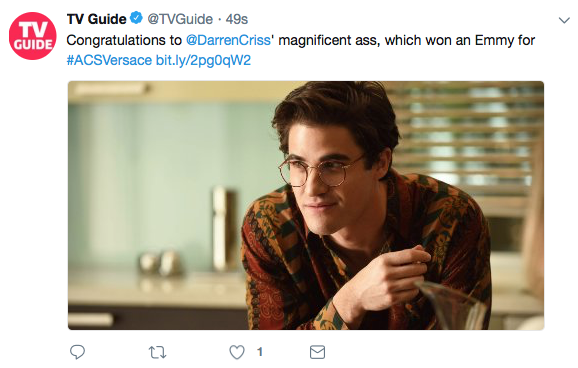 I guess it's not your granny's TV Guide anymore! (Image via Twitter)

TV GUIDE: Darren Criss won an Emmy for his disturbingly effective portrayal of serial killer Andrew Cunanan in The Assassination of Gianni Versace: American Horror Story. I'm kind of surprised TV Guide, of all places, reduced his win to his having a magnificent ass. I can't believe this tweet will stay up. Imagine congratulating an actress in this way? (I might expect a flippant comment like this from a sex site or even a cheeky gay blog, but ... TV Guide?!)

YOUTUBE: The new trailer for Captain Marvel is here, and Brie Larson is taking the reins with gusto:

THE TIMES: Pennsylvania school official comes out during emotional school board meeting:

“I’m gay,” said Carrie Rowe, Beaver Area superintendent. “I wanted to say that straight away because it’s likely the reason many of you are here tonight.”

“I have worked in education for 20 years and in that time, I’ve never addressed my personal life because it’s never been relevant to my job. To be honest it’s still not relevant, however there is a very vocal minority in this community who have decided to take my sexuality and use it as a cudgel against me.”

Rowe said she was made aware that a group was planning to protest her employment at the district because she was “allegedly firing Christians to push a homosexual agenda.” She made clear her only agenda is to provide a safe environment for all students, including those who identify as part of the LGBTQ community.

TOWLEROAD: Social media star Kyle Krieger unpacks alcoholism and addiction in the LGBTQ community, including his own: