Is he making you wet? (Image via The CW)

GAY FLESHBOT (WORK UNFRIENDLY): KJ Apa's bod goes on and on and on. 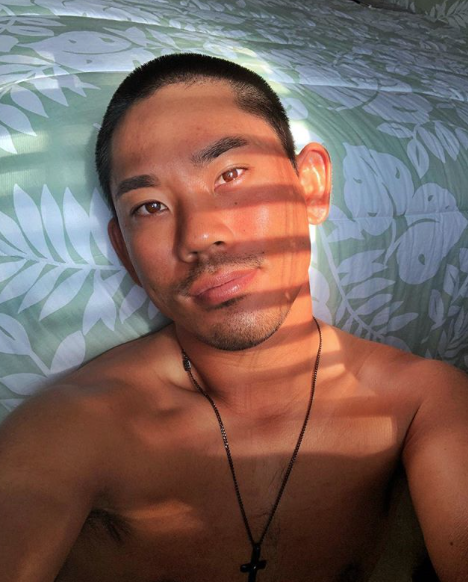 Amazing what a struggle it is to come out — still. (Image via Instagram)

I spent way too long pretending, hiding, and hating who I was. I was always afraid of what others would think/say. I've struggled with my mental health for many years because of that and it put me in a really bad place. Now I'm standing up for myself and the rest of the LGBTQ community in hopes of being an inspiration and making a difference in someone's life.

It's still hard for people to come out in 2018, even famous and successful people. We have to stop pretending the battle has been won.

Jo with the DWTS stars (GIF via GIPHY)

GR8ERDAYS: Nancy McKeon and John Schneider are heading to Dancing with the Stars, meaning Jo & Bo will duke it out on the dancefloor.

TWITTER: Young white woman (who turns out to be a stripper with an arrest record) accosts women of color out her car window, unprovoked, telling them:

Before you say anything, you might wanna make sure you're actual people ... and then call the cops ... That you're illegals, crossing the border. And your parents? Probably had to work for fuckin' dirt. Just to get here.

This was in Portland, Oregeon:

This racist woman started verbally attacking spewing racist and xenophobic rhetoric at women of color who were out celebrating with friends.

THIS IS DISGUSTING. Who is she?

NYT: Looking like the secret document regarding SCOTUS nominee/interloper Brett Kavanaugh is regarding sexual impropriety he allegedly committed against a female when they were in high school. Mike Huckabee is snorting that whatever happened in 2nd grade should stay in 2nd grade, but why don't we see what the allegations are? “He touched me” vs. “he raped me” — is there nothing he could do to make Republicans think twice? Sexually assault Dianne Feinstein on the Senate floor?

What's next? Dems in Senate want to block Kavanaugh because in 2nd grade, he licked the icing off a cupcake of a classmate? Will we have another "Spartacus" moment? https://t.co/eCDxtWpnvE

KENNETH IN THE (212): Scruff is trying to do something about racist, shaming profiles on the app. You don't have to spread for someone of another race to prove you're work, but don't be an asshole about any assholish “preferences” you have, either.

Side ways (Images by Wolfgang Tillmans via David Zwirner)

VOGUE: Lady Gaga, channeling Audrey Hepburn, does 73 Qs with Vogue, saying the rumor that she has a penis is the most outrageous one she's ever heard about herself: