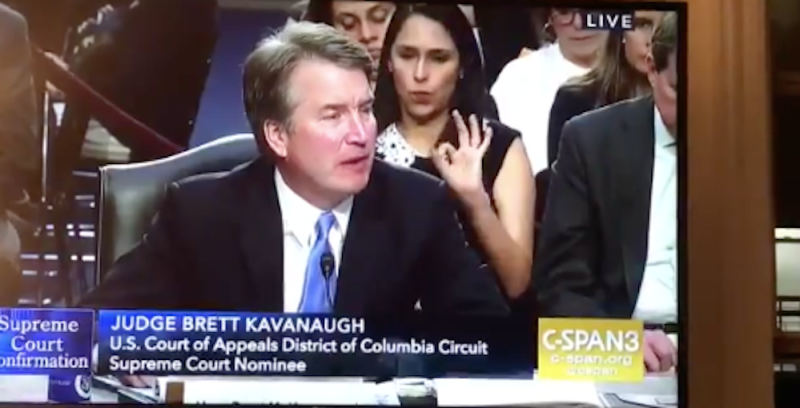 Yes, I am a Bash basher. (Image via video still)

I was scolded by several people for presuming that Zina Bash's use of what has become a white power/MAGA/anti-immigration symbol during Brett Kavanaugh's SCOTUS confirmation hearing was intentional.

I was told that the symbol is a hoax — well, it was, but clearly it has been taken over by Trump supporters and white supremacists, and it has been thrown in the White House and elsewhere with obvious intent.

I was told she was merely resting her hand on her arm — which seemed dumb because that symbol is not something you make casually in that position. (While speaking, etc., sure.)

Now, Newsweek has pointed out that Bash — again seated directly behind Kavanaugh for maximum TV exposure — mouthed words and then very deliberately made the same gesture to the camera.

It's not an accident.

Is she a vile, racist puke? Maybe. Is she merely trolling liberals over losing the Supreme Court on social issues and on the issue of a sitting president having to abide by the law? Very likely. Either way or both, this woman should have been removed from that hearing. It's juvenile at best, it's racist and inflammatory at worst.

If I had wrongly been accused of mouthing rude words and purposely making a White Power symbol on National television behind Kavanaugh on his first day of questions, you can bet I would not make that same mistake twice. But I guess that's just me, Zina Bash. pic.twitter.com/GWXXa2nphm