POSEIDON'S ADVENTURE: The movie's called The Goddess of Love, but it featured a god, too.

CNN: Susan Collins undertook a Sunday-morning trolling, rubbing salt in the wounds she created by pretending, for so long, to be undecided on Brett Kavanaugh's ascenscion to the SCOTUS. She said, among other crap, that she doesn't believe Kavanaugh was Blasey Ford's assailant, that she initially thought Kavanaugh should withdraw (but was wowed by his forceful pushback — the fix was in there, with Trump commanding Kavanaugh to do that to provide such cover) and repeats the idea that the people Blasey Ford named don't support her claims, when in fact not remembering the party in question is not a refutation that it ever happened. Pork on the hoof, folks:

Sen. Susan Collins: “After hearing Christine Ford’s very compelling and painful testimony, I thought...'perhaps he needs to withdraw' but then he came back with such a forceful denial … led me back to the fundamental issues that are fundamental to our legal system" pic.twitter.com/MXjyQoxz94

OMG BLOG: Bradley Cooper claims he lost out on a role early in his career because hew was not fuckable. 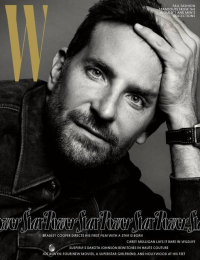 That's hard to believe — I'm sure he's at least vers.

TOWLEROAD: Jesse Tyler Ferguson and Justin Mikita take Architectural Digest on a tour of their gorgeous home, pretending not to have known that they were coming:

PINK NEWS:  Kelly Clarkson gets all teary-eyed over a gay couple trying out for The Voice.

EXTRATV: The Walking Dead actor Scott Wilson, whose career stretches back to In the Heat of the Night and In Cold Blood, has died of leukemia at 76.

HER: British Big Brother housemate comes out as gay in emotional chat with fellow contestant.