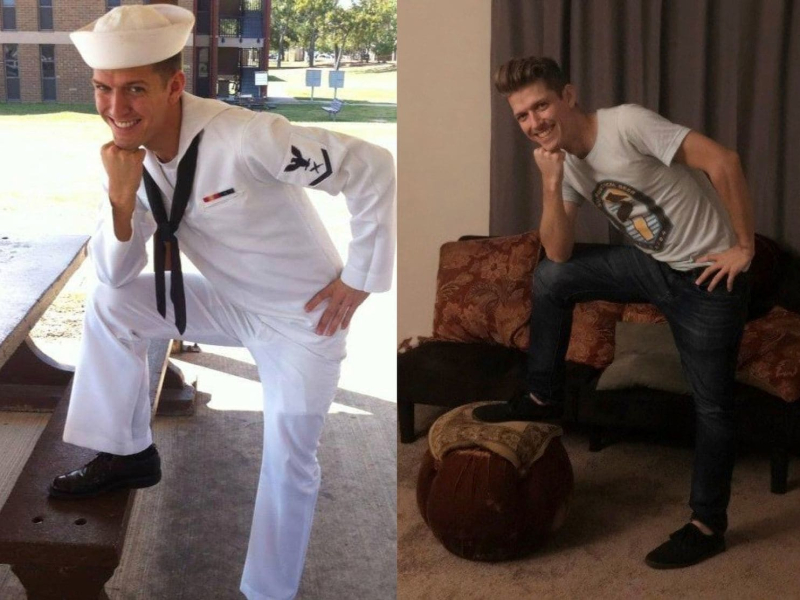 WAPO: The #HimToo poster boy speaks out about his loose cannon mom, who wrote that awfully embarrassing tweet. Turns out he is a #MeToo supporter.

HUFF POST: Nikki Haley has resigned as U.N. ambassador, effective end of this year. She told reporters she isn't running (in 2020). This happened on the heels of a report that challenged her ethics. Unclear if there's a connection, but in her live announcement, she lavished praise on Trump and on Jared Kushner.

Here's a little lunch time treat from tonight's show for all you @ollyofficial & @Mellor76 fans out there. Enjoy!

NEW YORK: Trump sinks even lower (I get it now — it's bottomless), holding a preening, televised welcoming ceremony for Brett Kavanaugh in which he proclaimed the new SCOTUS justice to have been proven innocent. He also apologized to him on behalf of America. Elsewhere, New York offers a compelling take on Ford's threat to Republicans:

It strikes me that Republicans are scared of Ford because she is essentially a class traitor. Two of the accusers whose names we know, Deborah Ramirez and Julie Swetnick, were immediately marked as outsiders by the circle of old school friends and Republican operatives that closed around Brett Kavanaugh from the start. Deborah was, the Times reported, “the daughter of a telephone company lineman and a medical technician” — nearly a townie, half Puerto Rican, doing her time scrubbing dorm toilets and serving her classmates food while Kavanaugh was, according to his roommate, coating his dorm bathroom in vomit. Julie Swetnick was worse, by the lights of Kavanaugh’s Georgetown Prep defenders: “Never heard of her. I don’t remember anyone from Prep hanging out with public school girls, especially from Gaithersburg.” Talk about incriminating yourself.

HUFF POST: That jackass Kanye West is meeting with Trump on Thursday. Why anyone would take him seriously — let alone a president — is not beyond me: It's because he's a black Republican, the kind of class traitor they need.

TWITTER: Lifelong Republican is quitting the GOP, provides long and thoughtul tweet thread explaining way. This is much more persuasive than those bots that proclaim they were lifelong Dems and now are into MAGA.

THE HILL: Virgina middle school offcials couldn't decide where a trans student should be — with boys or girls — during an active-shooter drill ... so they left her outside.

Hallquist decided to run, she says, because Vermont, where residents have typically come together to solve problems, is “in the midst of an identity crisis,” adding, “our governor has focused his politics on division rather than unity and solidarity. I cannot idly sit by and watch.”

MSN: The nominees for 2019 Rock and Roll Hall of Fame induction include first-timers Stevie Nicks (she's in with Fleetwood Mac, but this is her first solo nomination), Def Leppard (first-time nominees who seem like sure bets), Devo, John Prine, Roxy Music (first, somehow) and Todd Rundgren.

Others nominated are: Janet Jackson, LL Cool J, Kraftwerk, MC5, Radiohead, Rage Against the Machine, the Cure, the Zombies and Rufus & Chaka Khan. Inductees are announced in December. Expect Janet fans to be talking about this until then.

OUT: Gay character Ian Gallagher is disappearing from Shameless — the actor who plays him, Cameron Monaghan, has announced that the next episode is his last with the long-running series.

I've been told that I have not been posting many photos of blonds so I'm rectifying that with this week's #TemptationTuesday https://t.co/ick6Lk1amu pic.twitter.com/HaITTbyPDD