I'm not a fan of the one who talks like Kim Kardashian. (Image via video still)

GAY TIMES: Two of the Queer Eye guys help a woman hook up on Tinder. What happens when she's stuffed under a model mattress or entombed in somebody's backyard?! Lawsuit?! It's a total stranger! (Just kidding, total strangers are my type.)

THE ATLANTIC: This is a fascinating article, and a topic I've thought about from time to time: What happened to all the gay men with HIV who sold their life insurance, expecting to die ... and then lived? From the piece:

A wave of people viaticated their life-insurance policies when confronted with such a gruesome and fatal virus. Some came into enormous sums of cash. Many are alive today because of protease inhibitors. Those who viaticated their policies and continue to live with HIV do so knowing that investors have long waited to collect on their deaths ...

Sean Strub’s health was in stark contrast with that of the strapping men in those advertisements when he began viaticating life-insurance policies in the mid-1990s. “I was a skeletal 125 pounds, 6’1, covered in purple Kaposi’s sarcoma lesions,” he says. “Anyone looking at me assumed I didn’t have long to live.” Strub, a writer and activist, says he viaticated three life-insurance policies, collecting 93 percent of the death benefit on a $150,000 policy, 70 percent on a policy for $300,000, and around 50 percent on a $20,000 policy. He used the money to start POZ magazine.

This is my ideal recipe for soup. (Image via OMG Blog) 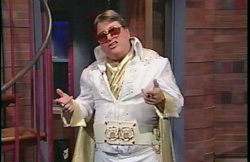 LGBTQ NATION: Vinnie Favale, senior veep of talent for CBS, has been placed on leave after allegedly engaging in inappropriate language in the workplace — including insisting Stephen Colbert must be gay because he's so bad at interviewing women. He is pictured, at right, from an old Howard Stern Show appearance.

WSJ: Oddly, Brett Kavanaugh has published a short, contrite essay in which he acknowledges he said some things he shouldn't have during his confirmation hearings, but that he'll be less emotional going forward. I think this is bizarre to put out there at this juncture.

MSNBC: Embattled Democratic Sen. Heidi Heitkamp (D-North Dakota), who in the latest poll is down 12 with a month to go before the election, has decided to vote NO on Brett Kavanaugh. She said it's not a political decision, but a personal decision — and she has slammed the process. Emotional video via CNN:

THR: Amy Schumer and Emily Ratajkowski were arrested — and not for I Feel Pretty, but for protesting Kavanaugh.

Today I was arrested protesting the Supreme Court nomination of Brett Kavanaugh, a man who has been accused by multiple women of sexual assault. Men who hurt women can no longer be placed in positions of power. pic.twitter.com/nnwq1O4qk3

C-SPAN: Long-retired SCOTUS Justice John Paul Stevens, a lifelong Republican, has withdrawn support for Kavanaugh based on his unjudicial behavior during the confirmation hearings:

Retired #SCOTUS Justice John Paul Stevens on Judge #Kavanaugh: “I’ve changed my views for reasons that have no really relationship to his intellectual ability or his record as a federal judge…I think that his performance during the hearings caused me to change my mind.” pic.twitter.com/RyM6ZKOevx

BBC: Shamal Waraich is British-Pakistani — and he's gay, Muslim and living with HIV. 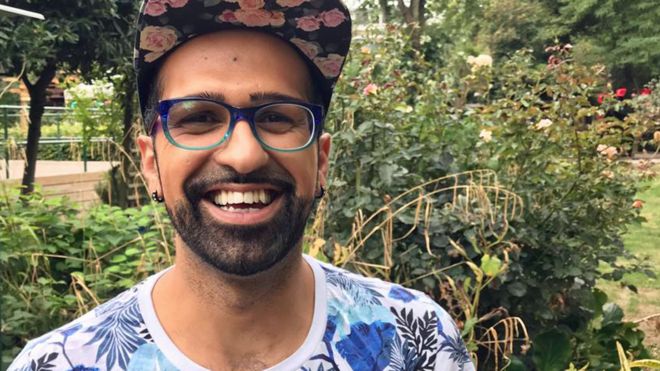 Waraich speaks about his guilt to the BBC. (Image via Shamal Waraich)