Yasss, Queen ... But Not Enough Freddie: A Review Of BOHEMIAN RHAPSODY Comments (0) 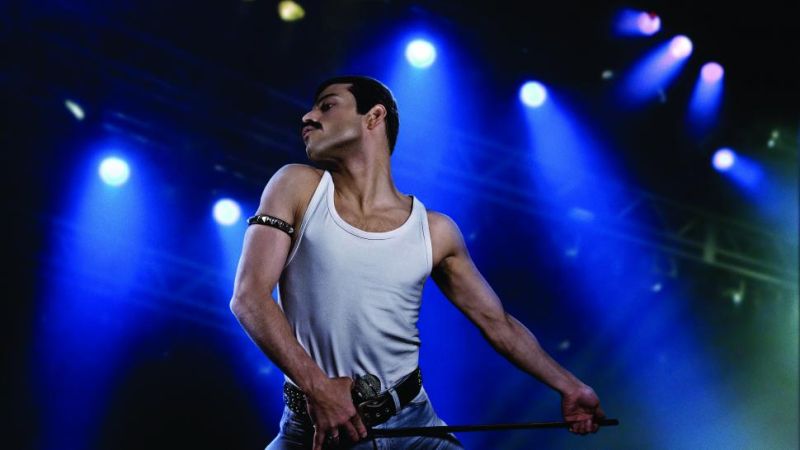 Bohemian Rhapsody is a well-made, watchable enough record of one of the most popular rock bands of all time, but it never rises above being a standard-issue biopic to become a great film imbued with the great drama of a great life.

The first clue that the film wasn't going to be the balls-out Freddie Mercury story so many were hoping for had to be the title — it's not called Mercury, after all, and that's because, as a project on which the surviving members of Queen collaborated, it's more a legacy-solidifying reminder of the band's accomplishments and a mere teaser of what may have made its dynamic lead singer tick.

In short, it's all just a bit too authorized.

The film's milquetoast quality aside, Rami Malek is outstanding as Mercury (in spite of far too aggressive prosthetic bucked teeth that he often seems in danger of losing), conjuring just the right mixture of charisma, talent and narcissism. From his early chutzpah in insinuating himself into Queen to his overindulgences and eventual pigheaded self-destruction, the character is always enchanting, a man we all feel like we know and want to know even better.

The rest of the cast feels generic in comparison (though Mike Myers is delightfully unrecognizable as the record exec who let Queen slip away), and the script's avoidance of true darkness — the word “gay” is uttered once, not by Mercury; the word “AIDS” is similarly nearly absent though Mercury died of it in 1991 — makes it feel dated. We see Mercury kissing a couple of guys, but the rest of his gay sex drive is relegated to suggestive sequences showing him hanging around a men's room and walking, as if led by his villainous handler/lover Paul Prenter (Allen Leech), into an SM club. How on earth this was directed by an out gay man (Bryan Singer, who was fired with 16 days left to shoot, and replaced by Dexter Fletcher), I cannot fathom. It feels like a straight person's take on gayness.

There are also some major liberties taken with timelines, including when Mercury left Prenter, when he and his life partner Jim Hutton became a couple and when Mercury informed the rest of Queen that he was HIV positive.

All that said, what works about the film aside from Malek really works — that would be its focus on how some of Queen's biggest hits were created, and scenes in which the band plays (miming to recordings of the real Queen) with abandon. In particular, though it's odd that the film draws to a close with essentially Queen's whole Live Aid set, those performance scenes are electrifying. Thing is, there are so many music-driven sequences that the overall Bohemiam Rhapsody experience works far better than it should.

With that music-powered boost, and owing to Malek's thorough capturing of Mercury's essence, Bohemian Rhapsody's well-liked star may even earn an Oscar nomination. It is hard to imagine the film being watchable without him.