It's in his DNA. (Image by Martijn Smouter)

BBC NEWS: White Magazine, one of Australia's biggest marriage mags, has gone belly-up after refusing to cover same-sex marriages. Advertisers left. The couple behind the mag were Christians, don't ya know.

EXTRATV: Mel B details scary suicide-by-aspirin attempt from December 2014 — and she shot an X Factor show the next day!

Trump: "You gotta take care of the floors. You know the floors of the forest, very important... I was with the President of Finland... he called it a forest nation and they spent a lot of time on raking and cleaning and doing things and they don't have any problem." pic.twitter.com/cC8syQobdC

BUZZFEED NEWS: Trump, talking out of his ass, claims raking the forest floor prevents forest fires, cites the leader of Finland as source of this wisdom. Finland's president said no raking was ever discussed. Who you gonna believe?

Rep. Adam Schiff said Pres. Trump's appointment of Matthew Whitaker as acting attorney general was unconstitutional because the attorney general is a “principal officer” and those positions require Senate confirmation under the Constitution. https://t.co/Ulm2hqoJ2E pic.twitter.com/avRFSzkybm

HILL REPORTER: Michael Avenatti implies right-wing conspiracy con artist Jacob Wohl is behind his domestic violence scandal — and further states on Twitter he plans to take Wohl down as part of his life's work: 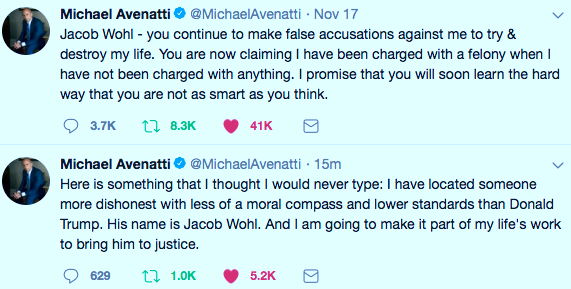 I'm Team Avenati until we find out how credible the charges are. (Image via Twitter)

INSTAGRAM: A very happy 58th to '80s diva Kim Wilde! My favorite songs by her are actually the 1988 hits “You Came” and “Never Trust a Stranger.”

Goldman's The Princess Bride was an unpopular novel that became a sensational movie. (GIF via GIPHY)

GR8ERDAYS: RIP to William Goldman, 87, one of the greatest and most popular screenwriters of all time.

I can see right through him! (Image by Diontrae Jackson)