ABOVE: Father and son!

Quest for acceptance (Image via Attitude)

ATTITUDE: Black, gay rapper Milan Christopher, 34, says he is proud of who he is after a worrying tweet a couple of months ago, in which he expressed frustration with being gay in a homophobic world:

... In that moment when I sent that tweet saying: “I wish I was straight,” it was because I know I am talented, and I know I wouldn’t have to go through this pushback if I was straight. A lot of these places are run by people who are extremely homophobic.

He sounds like he's come to grips with that struggle now — let's hope! There's no time to wish we aren't who we are, only time to force others to stop caring so much.

HAARETZ: The midterms were, in fact, a blue wave. Deal with it.

HUFF POST: Unsurprisingly, Trump wants to cut off all help to Puerto Rico, claiming government mismanagement. What kind of a fucking idiot would a Puerto Rican living in Florida have to be to have voted for this chump?

I can't believe this commercial that just ran on Fox News is for real pic.twitter.com/gGInt8BKhp

TWITTER: Above: Jesus. Fucking. Christ. Trumpy Bear is real. I consider this an I Really Don't Care Bear, Do U?

NEWSWEEK: Mueller is sitting on a bundle of indictments.

Quite extraordinary moment in #TheyShallNotGrowOld when the image is first enhanced by colour & sound. #PeterJacksonpic.twitter.com/9S8nWsLTvi

GR8ERDAYS: In honor of Veterans Day (Sunday, November 11; observed today, Monday, November 12), check out a teaser from They Shall Not Grow Old, a WWI doc by Peter Jackson in which his team has painstakingly restored footage from the era, getting rid of jerkiness and deterioration and adding color. The results are surprisingly moving.

Douglas Rain, the voice of HAL, was a serious stage actor — remembered for 9 hours of voice-over work. (GIF via GIPHY)

GR8ERDAYS: The voice of HAL from 2001: A Space Odyssey has died.

BARABOOK NEWS REPUBLIC: Over 40 students (including one who is called black by  the person who posted the image) threw Nazi salutes (one did the white-power okay sign) in a junior high prom group shot at Baraboo High School in Wisconsin. Nothing has been done about it so far, other than the principal tweeting that she'll pursue some kind of action. The local paper wouldn't even state definitively that this was a sig heil. 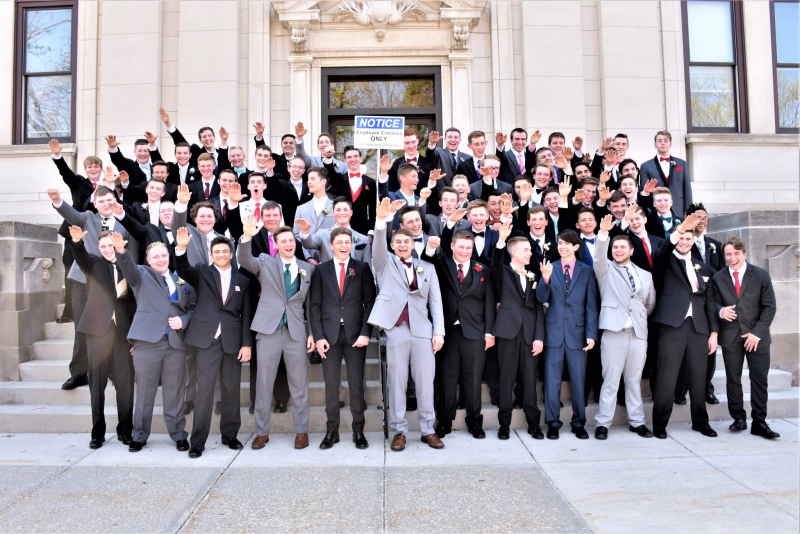 If this doesn't give you chills, what will? (Image via Twitter)

Bark of the coveted (Image by Vieler Photography)