ABOVE: Here's why I love Summer Diary Project.

BELOW: Gay art, Republicans abandoning North Carolina Republican, a right-winger thinks it's harder being conservative than gay and more ... NBC NEWS: Allasheed Allah, 54, has been arrested for the assault of a woman over a same-sex kiss 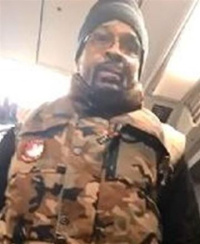 in the NYC subway, a brutal attack that broke the woman's spine. Welcome to modernity, baby.

CNBC: Here's how to DL a copy of everything Facebook knows about you — and it's a lot.

THE GUARDIAN: A fascinating survey of three men — gay, bi and trans — on the topic of what masculinity means to them.

POLITICO: Scandal-plagued North Carolina Republican is radioactive to other Republicans. If only Republicans were this sensible about Trump.

WAPO: First her kidney tried to reject her, now Melania's approval rating is DOA — down by double digits.

A 7-year-old child dies while in the custody of the U.S. government. ⁦@DHSgov⁩ Secretary is coming before ⁦@HouseJudiciary⁩ next week, and we will be demanding immediate answers to this tragedy. https://t.co/5XCAavD5wB

WAPO: A 7-year-old immigrant taken into custody by U.S. border patrol has died of dehydration and exhaustion. Unconscionable. The only way this would not bother you is if you literally see immigrants as vermin.

PINK NEWS: Conservative commentator Gayle Trotter thinks being conservative is harder than being gay. Luckily, the idiot's getting dragged.

NYT: Ellen DeGeneres is threatening to quit her talk show.

A HERO subway rider photobombed Ronan Farrow in this photo for GQ and it's AMAZING https://t.co/RwkFASGC1U

GQ: Ronan Farrow on the “hard work” he does:

I keep my head down, and I do the work, and it’s pretty hard work, but harder for the sources I’m working with than it is for me. And anytime one of those sources feels that I’m a person that they can trust and come to if they have a significant story, and anytime someone knows that I will work carefully and meticulously to interrogate those claims but also create a space where they feel safe in coming forward with them, those are things I’m deeply grateful for. That’s what’s made this run of reporting possible.