Dallas Does Dallas: The Sequel (GIF via OMG Blog)

On a related note, Cameron Dallas's bubble is just as hot packed into a Speedo as it is laid out bare.

BOSGUY: Furry guy in his swimsuit.

SALT LAKE TRIBUNE: The Mormon Church punishes gay breaks with the code of conduct far more severely than non-gay breaks, and gay Mormons can even be secretly marked within Church records — like an indepdendent sex-offender registry. Perhaps not surprisingly, the Mormons equate homosexuality with pedophilia, and always have.

SEATTLE TIMES: How Christian ministries are dealing with the increasingly common declaration, “I am a gay Christian.”

POLITICO: Barbara Lee, one of the House's most left-leaning Dems — and a woman who lost a tough race within the party — will serve in Democratic leadership after all — Nancy Pelosi is creating a position for her. 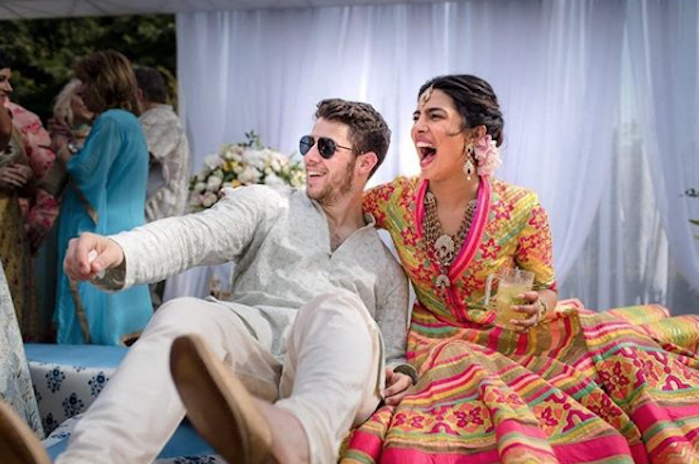 The bride and groom were Christian-married Saturday, will be Hindu-married Sunday. (Image via Instagram @priyankachopra)

EXTRATV: Nick Jonas is off the market, guys. But don't worry — maybe their marriage will be open so you can still fool around with him.

America has lost a patriot and humble servant in George Herbert Walker Bush. While our hearts are heavy today, they are also filled with gratitude. Our thoughts are with the entire Bush family tonight – and all who were inspired by George and Barbara’s example. pic.twitter.com/g9OUPu2pjY

TOWLEROAD: George H.W. Bush died Friday at 94, making him the longest-lived U.S. president in history (a feat we hope Jimmy Carter will surpass early next year). He had a bad record when it came to LGBTQ rights, was better than Reagan on HIV/AIDS (but almost anyone would've been), gave us W, and yet seems to be receiving almost universally positive, nostalgic send-offs on the Internet. I guess that's like standing next to someone fat to look thin — Trump's drooling criminality has made 41 look saintly.

SALON: Mueller's end game is nigh — how bad will it get for Trump? Bad, says Truscott:

With Donald Trump, it’s always about the money. He is not going to sit in the White House and watch his business empire suffer the same fate as Paul Manafort, who forfeited $46 million to the government as part of his plea deal. He’ll resign with an assurance that he is pardoned for his crimes in the Russia investigation, the same way Nixon resigned with a pardon for his crimes in Watergate.

So Russiagate isn’t that different from Watergate after all. They will have the same end game.

HUFF POST: Voter fraud is exceedingly rare in the U.S., but in Texas, where a woman born in Mexico seemingly inadvertently committed it, the punishment is stiff — eight years in prison! (Pssst ... she registered as a Republican, so it's highly feasible she had no clue she was doing wrong because she apparently had no clue she was Mexican.)

KENNETH IN THE (212): FOX's upcoming live version of Rent is matching donates to Broadway Cares/Equity Fights AIDS up to $20,000 in honor of World AIDS Day.

YOUTUBE: Ariana Grande's incredibly catchy (dare I say ... instantly iconic?) single “thank u, next” gets an adorable video (above). All the movie references here. Even if you don't love her, you'll love this:

"thank u, next" but every time ari says "next" it's catherine zeta-jones pic.twitter.com/vSC14zuhnQ