Strong impression (Image via Adriano B.)

F*CKING YOUNG!: Adriano B. intros us to Les Amis Homme.

GR8ERDAYS: An interview with the elusive Helena Kallianiotes, whose Helena's was a star-soaked '80s hot spot. Great dish on Madonna & Sean, Jack & Anjelica and more. Do any photos exist from inside that place?

BUZZFEED: Roger the swole kangaroo is dead at 12. Steroids?

FACEBOOK: She's really opening up to promote Ben Is Back:

POLITICO: SCOTUS turns its back on hearing challenge to Planned Parenthood funding. 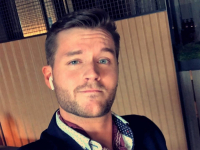 METRO WEEKLY: I saw many people in the LGBTQ community — mostly white gay men — kvetching that the Grindr president's comments on marriage being a holy union between a man and a woman had been blown way out of proportion. I guess people are addicted to hooking up on their fave app, because now comes word that Landon Rafe Zumwalt, head of communications for the Chinese-held hookup app, has stepped down over those same comments.