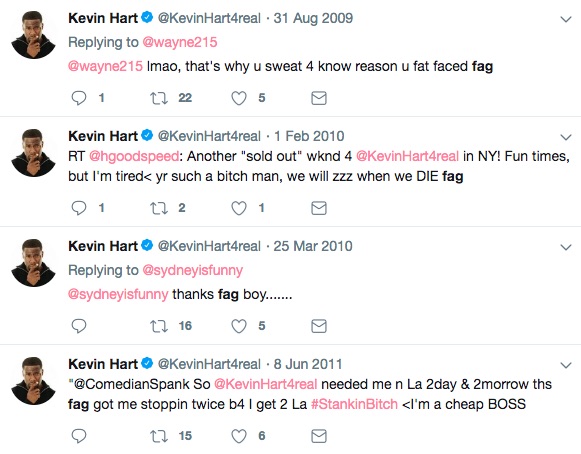 Kevin Hart, who was just tapped to host the Oscars, is a homophobe. He doesn't want to ID as that in the same way Roy Moore doesn't want you to think he's a child molester and racists these days will use the N-word in anger and turn around and say they're the least racist people you know.

The truth is, Hart has used anti-gay slurs and at least one AIDS reference very casually, and often (in the past) on Twitter, not as part of edgy humor, but conversationally. He hsa never apologized, just explained his most infamous comment, the one about how he'd beat his son if he played with a typically girl-targeted toy.

Also, at least some of his old tweets are still live. 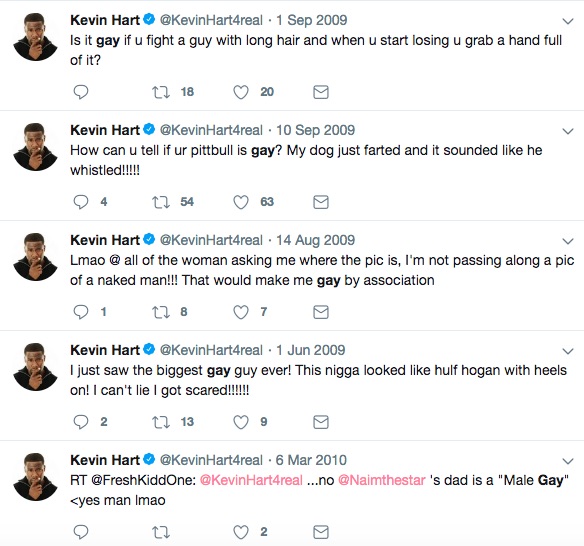 Incredibly, I had to waste time on Facebook debating a young gay guy who is apparently Hart's #1 fan. He believes taking offense to “die, fag” is an example of being butt-hurt, and he thinks nobody's perfect, and he thinks if Hart were not famous it wouldn't matter, and he thinks because Hart played a guy who was okay with a gay man in a movie he's not anti-gay, and, and, and.

Oh, and he says he says these things to his husband. 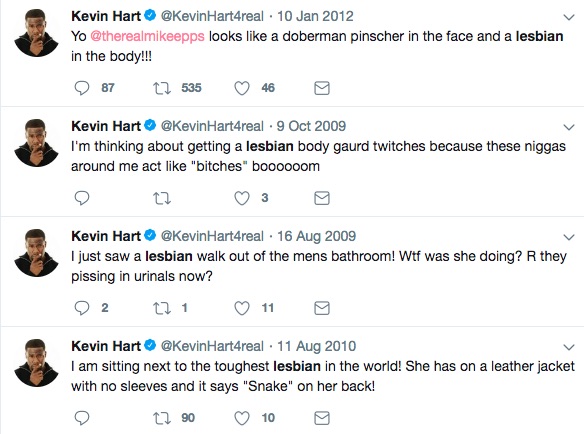 I've said it before and I'll say it again — the gay community is going to become more and more conservative as it gets more and more accepted. Already, in spite of the loony queer people who take offense at E V E R Y T H I N G who get all the press, I think there are many more young queer people who just want to watch their fuckin' shows, end of story. They have marriage, they're done.

If you're more offended when someone takes offense than you are offended by racism and homophobia and injustice, you're the problem.

Kevin Hart may well have grown up in the past eight or nine years. More likely, he will have people around him urging him to fall on his sword a li'l in order to preserve his hosting gig. There's no way he won't address it. But more importantly, how do we deal with gay people who think being called a faggot and having HIV/AIDS mocked is okay because they want to fit in? That battle seems lost.