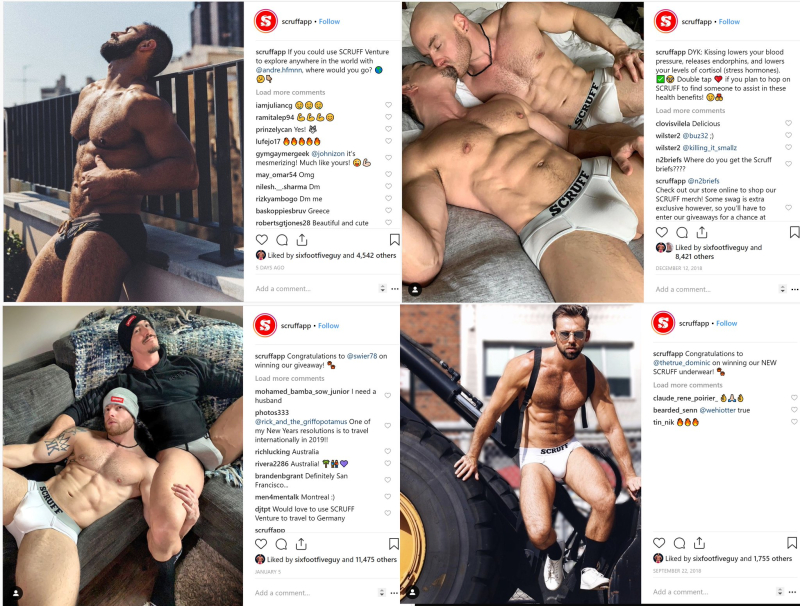 As Twitter's @Pup_Amp points out, Scruff's promo  imagery on Instagram would now break its own rules. (Images via Instagram @scruffapp)

OUT: CEOs of gay apps are not always great gay advocates. Case in point: Eric Silverberg of Scruff is explaining that the popular hookup app has banned “sexually suggestive embraces,” and also profile photos showing men in jockstraps, underwear and bikini-style (aka Speedo) apparel. I read a sympathetic comment from a user who said it was due to laws changing, but that is untrue — Scruff has been clear that the changes are strictly due to money. The app was removed from “an app store” (hi, Apple) earlier this year. These companies — Apple, Google, Facebook/Instagram — are wildly conservative, sexually, and probably unconsciously homophobic in their application of their puritanism. It's one reason why this blog makes no money — advertisers think lots of shirtless guys = too racy, they spend time making sure there is no VPL or even suggestive bulges in content, and even object to coarse language. (Pearls. Clutched.) That's why years ago, I had to give up. There's no point trying to run a gay blog with no sexuality just because Google has placed me on a blacklist while other gay blogs skate, and while larger sites with major $$$ backing post far worse. So I post what I want and get bupkus for it. So yeah, fuck you, Scruff, for not even trying to fight.

THE TALLAHASSEE DEMOCRAT: Michael Ertel, who had just been appointed Secretary of State by newly elected (barely ... suspiciously ...) Gov. Ron DeSantis (R-Florida), stepped down Thursday after photos emerged showing him dressed as a female Hurricane Katrina victim in blackface. The party happened just a year after New Orleans was devastated by Katrina, killing or displacing thousands. Great guy, and goes to show you the types of individuals the governor — accused of racist pandering during his campaign — surrounds himself with.

YOUTUBE: Trinity the Tuck offers up “The Face The Body” — warning, it's three minutes of high-drama sci-fi before a typical drag-queen song begins. I would also suggest that so much concentration was placed on the face, the body that the hair was neglected:

TOWLEROAD: Lance Bass and Michael Turpin are trying for a child with their seventh egg donor. Coincidentally, Olympian Ian Thorpe and his partner Ryan Channing also announced they're looking to become parents. #daddiesknowbest