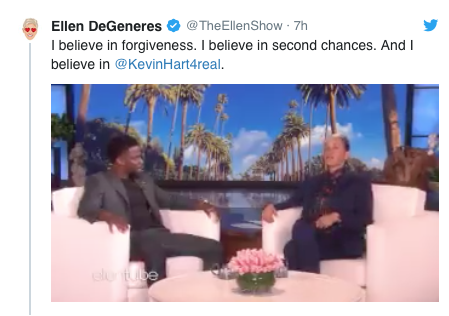 I believe in forgiveness, but I demand contrition. (Image via Twitter)

This is beyond disappointing.

Ellen DeGeneres, one of the most famous and powerful queer people in the world, has extended herself mightily to exonerate Kevin Hart for his past homophobia, seeming to overlook the fact that he claims to have apologized back in the day (but didn't) and that he is still extremely defensive, not apologetic.

Here is Hart in 2015 pushing back on mild criticism of homophobic humor in Get Hard:

In a new interview, airing today, Hart reiterates that he feels being called out for things he actually said and jokes he actually made was in some way a personal vendetta meant to take him down.

In spite of that entrenched approach, Ellen took to Twitter to firmly declare she wants him to host the Oscars and that she is in his corner.

It's a shame, because his obstinate behavior shows he isn't truly in ours.

I guess fame and power often stick up for fame and power (Whoopi for Mel Gibson comes to mind), though I do think Ellen's heart is in the right place.