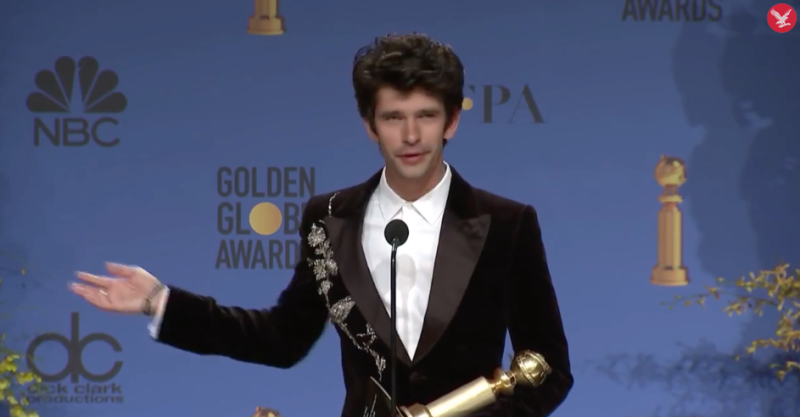 He's Ben there and done that. (Image via video still)

INDEPENDENT: Out Golden Globe winner Ben Whishaw calls for there to be more gay actors playing straight roles to level the playing field:

I think there needs to be greater equality. I would like to see more gay actors playing straight roles. It needs to be an even playing field for everybody that would be my ideal. I don’t know how far we’re away from that. That’s where we should be aiming.

JOHNNY LOPEZ: The most rousing gay-themed speech at the Globes came from Brad Simpson, executive producer of The Assassination of Gianni Versace: American Crime Story. Don't miss it:

DAILY MAIL: So of course the Fiji Water Girl of the Golden Globes is a model whose photographer husband sold his belongings and moved from his home country to be with her — after meeting her only twice.

NEWNOWNEXT: Timothée Chalamet — who was robbed for Best Performance by an Actor in a Supporting Role in Any Movie at the Globes — showed up in a sparkly Louis Vuitton harness (at least it read as a harness), which sent the message to his gay fans that we've got his back ...

HUFF POST: HuffingtonPost badly overestimates the impact of those big wins for Green Book (good movie with A-plus performances, but such a white savior fable — ask the family) and especially Bohemian Rhapsody (okay TV movie with A-plus performance at its center that mishandles its subect's sexuality) at the Globes, predicting that they're now the Oscar frontrunners. I've always thought Green Book had that pleasing vibe, but I do think people are scratching their heads at both now. I really am hoping calmer heads prevail and The Favourite (flawless in every way) and Roma (high art) and If Beale Street Could Talk (incredible adaptation of James Baldwin with A-plus performances) kick some ass instead.

EW: Bryan Singer — who directed Globes fave Bohemian Rhapsody but was lying low due to controversy swirling around his professionalism on that set and his behavior with young men elsewhere — posted a thank-you note regarding his film's accolades:

INSTAGRAM: Jamie Lee Curtis has completed her transformation into her mom, Janet Leigh.

JILL WINE-BANKS: Here is how Trump gets impeached.

NYT: I hope they get him gone ASAP, but regardless — can Ruth Bader Ginsburg hang on for two years? She is missing her first-ever day today. She's been on the bench as a SCOTUS justice for 25 years, but today is working from home.

TOWLEROAD: Wilson Cruz is coming back to Star Trek: Discovery. Meanwhile, take a bold journey between those thighs:

NBC NEWS: Blued, the world's largest gay hookup app, has halted new sign-ups due to reports that underage users were bypassing its rules and getting HIV. The app, based in China, has 40 million customers. It is the company that owns Grindr.

EXTRATV: Somehow, Kate Beckinsale's rumored fling with Pete Davidson means she is officially an “older woman.” I had to look up her age. At 45, she is fully 10 years older than Anne Bancroft in The Graduate, so hey, hey, hey Ms. Beckinsale.

TWITTER: Jada Pinkett is asking why R. Kelly's music streams have spiked while Surviving R. Kelly has aired. The answer is that people are bad:

How is it that R Kelly's music sales have spiked (substantially) since the release of the docuseries Surviving R Kelly? I need some help in understanding. What am I missing??? pic.twitter.com/pysqVxLzyi