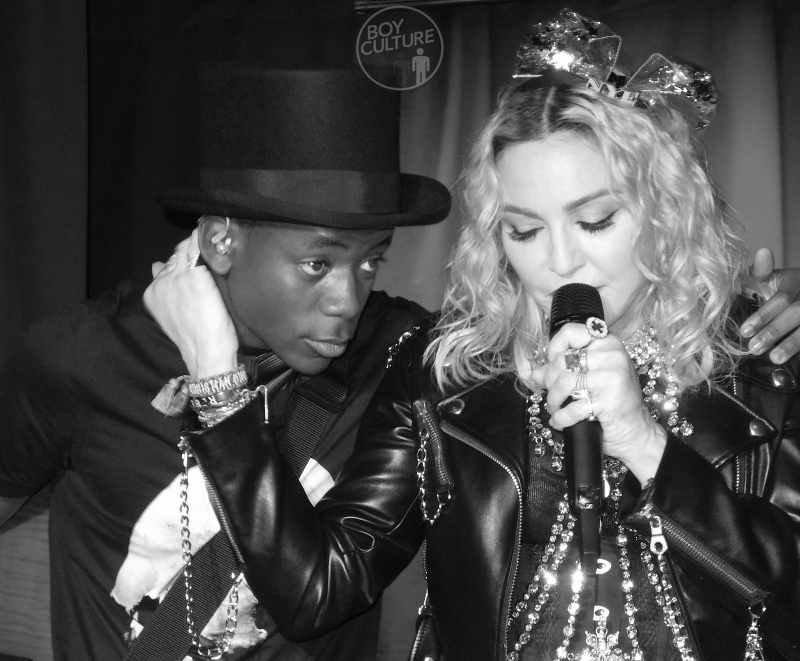 (Image by Matthew Rettenmund — do not publish anywhere without permission)

I never do anything on New Year's Eve ...

It's a celebration ... (GIF by Matthew Rettenmund)

Tonight, I received a text from a music-industry pal who said people overseas were chattering about a surprise Madonna appearance tonight in NYC. I immediately envisioned a pop-in at the iconic Stonewall Inn, perhaps a speech and champagne toast. Nobody would talk, not even my friends with connections there. I moved on.

Then, a second friend, this one in NYC, said he'd heard something, too, and we thought it had to be Stonewall. Finally, he heard she would announce at 10 p.m., meaning people would be in a mad dash to get over there, so I had to decide if I should just go and hope for the best, or stay at home.

I grabbed my little camera and dashed over in the crazy traffic.

Madonna raises a glasses to 2019 ... (GIF by Matthew Rettenmund)

Downstairs, the club was filled with a young, very diverse (gender, race) crowd. It was only a $5 cover, so that checked out. Nobody seemed to be looking around for Madonna. I figured she'd appear upstairs, so proceeded to the back, only to be told the coat check was optional. I began to worry I'd miss out, thinking they'd have to seal the upstairs off soon, but I made it in and saw a very select number of Madonna fanatics who seemed to have heard what I'd heard — and a bit more!

In the crowd, I ran into a super sweet EM20 reader whose friends (all hot, all tall, all equally firm on the idea that we needed to hold our ground at the front of the audience pit), but everyone else looked like general bar-goers. As time went by so slowly (I arrived by 9:25 p.m. or so), the place got jam-packed. We had lovely and fragile girls and drag queens nearby, but big and aggressive guys on the other sides, so I spent at least half the time just leaning my full weight back to try to keep some breathing room. People were objecting, politely, to be jostled, but everyone kept it fairly light. No NYE fistfights.

Finally, when it was about to hit midnight, Ryan Jamaal Swain of Pose and another cutie whose name I did not get took to the stage and yelled (no mic!) speeches about how 2019 is the 50th anniversary of the Stonewall Riots. They also led the countdown to 12, which was when everyone lost their shit because moments later, Madonna unceremoniously appeared from behind a red curtain.

I loved her festive look — all-black, bejeweled and wearing a whimsical bow that reminded me of Liz Rosenberg's deely-bobber headgear at events. I thought she looked lovely. Some wags later pointed out her mysteriously Minajian backside, but she chose to have more junk in the trunk a few years back, so I'm surprised why it's still such a surprise, and I wondered if someone would do a, “Why'd you come around me with an ass like that?” meme later. Whatever. We're the LGBTQ community, people, a lot of us have ... enhancements!

Madonna was beaming and in great spirits, saying she is “desperately seeking” Stonewall and a good time, a rare reference to her best movie (don't try me) before pulling out some adorable Eileen Brennan-in-Clue reading glasses and noting that 2019 was the year she was giving in and wearing them. (Meanwhile, my eyes went at 40.)

She launched into one of her trademark serious-issue speeches, but I think anyone would agree this one was one of her best in that it had some rousing oratorical heights about fighting for ourselves, each other and for love, and was delivered warmly and wittily. (The card she was reading from was rainbow-colored.)

I see you! I stand here, proudly, at the place where Pride began — the legendary Stonewall Inn — and the birth of a new year. We come together tonight to celebrate 50 years of revolution. Fifty years of freedom-fighting. Fifty years of blood, sweat and tears — can I get an amen?! Fifty years of sacrifice. Fifty years of standing up to discrimination, hatred and — worst of all — indifference. And it all started here, at Stonewall. Let us never forget the Stonewall Riots and those who bravely stood up and said, Enough. Enough brutality, enough violence inflicted on this community, enough stigmatism, enough oppression, enough pain and suffering ... We must never forget where we came from.

Of course she threw in a, “Fuck, yeah!” and raved about New York City as the place where her artistic journey began.

I have heard that Madonna — who was recently announced as a Stonewall ambassador, so is guar-own-teed to be a huge part of World Pride this summer —was enthusiastic about this appearance with the Stonewall Gives Back people, and did it for free, something that you may not realize is very uncommon. Many, many chartable events, even HIV/AIDS events, feature supportive stars who are actually taking huge appearance fees. Madonna was there on her dime, and the way she speaks about queer people is clearly from the heart. 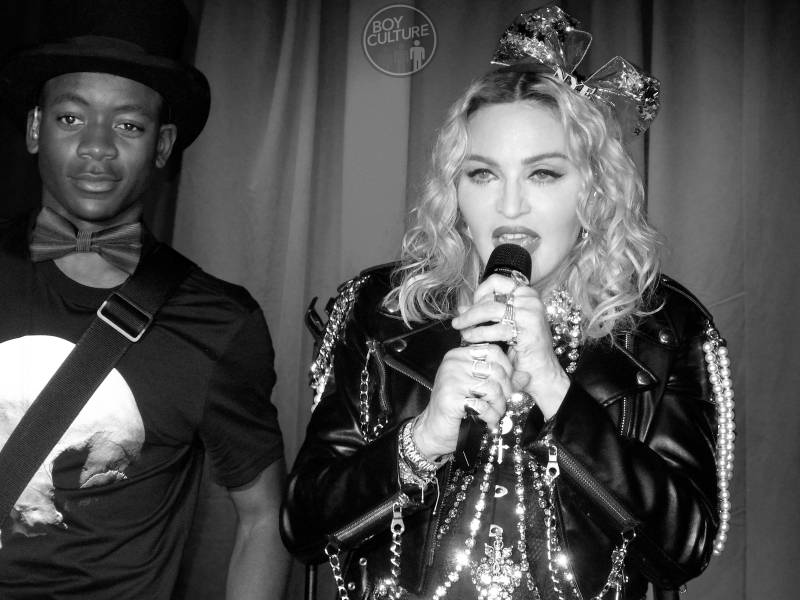 It don't matter if you're in black-and-white. (Image by Matthew Rettenmund — do not publish anywhere without permission)

When that wrapped, she had her teen son David Banda accompany her on an acoustic version of “Like a Prayer.” She sounded great, leading me to think her next tour really could be a stand-there-and-sing affair.

In-between songs, Madonna was teasing the audience about not singing along or emoting, so everyone lost their shit and howled for her, which she appreciated. She joked about leaving for a toast, and with a fan about taking them home, noting she often takes homeless people in. When someone shouted to David that his mom is a legend, she said that legends to him were Aquaman, “Which is normal,” but he was shaking his head no. 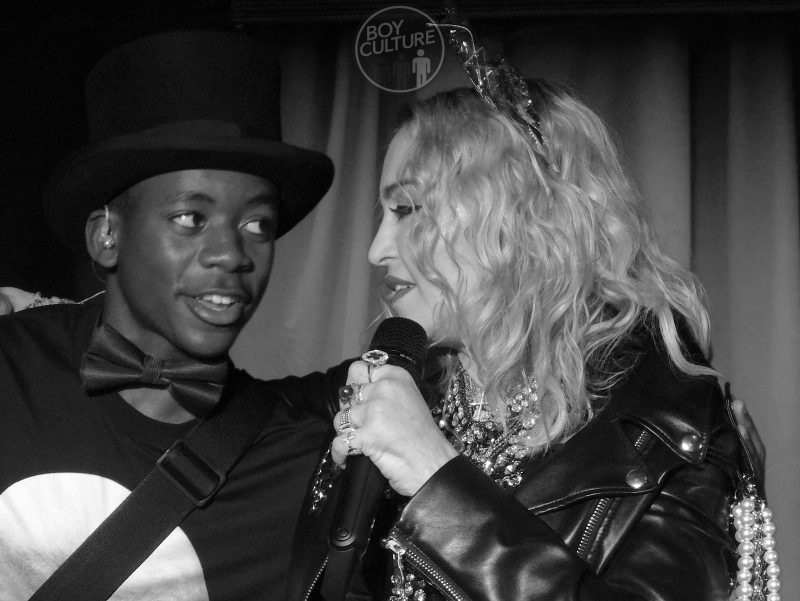 Madonna's affection for her kid was so touching. (Image by Matthew Rettenmund — do not publish anywhere without permission)

They did a sweet duet of the Elvis hit “Can't Help Falling in Love,” on which David actually sang. Madonna's voice was spectacular on that one, especially the closing high note.

With that, she was off, wishing us well and leaving the room electrified.

Afterward, it was interesting hearing the many younger LGBTQ people gushing about how cool her appearance was, how appreciated her words were, in light of her kooky Instagram. The youngsters were won over, and the oldsters had already killed to be there.

It took me over an hour to get my damn coat back, but it was worth it. Now, I just have to figure out someone to shower with a random act of kindness.