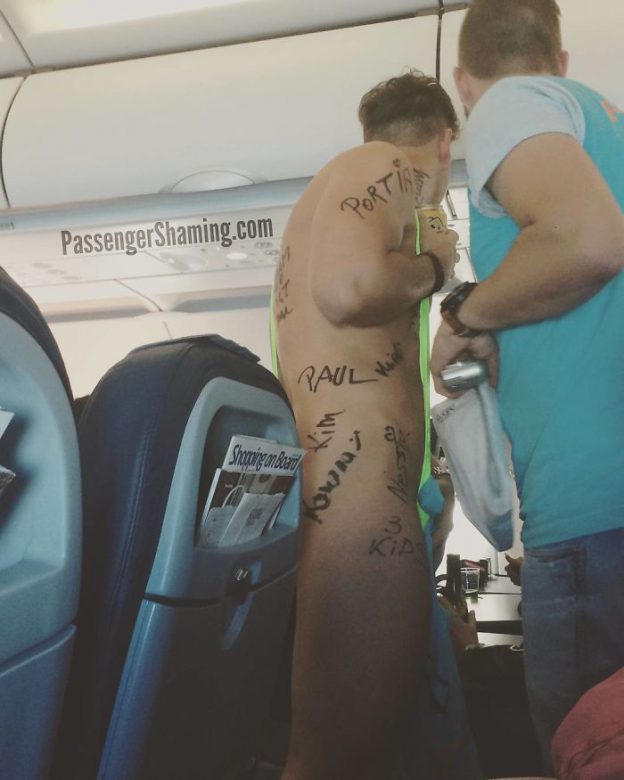 This one is galling but ... I could excuse it. (Image via PassengerShaming.com)

OMG BLOG (WORK UNFRIENDLY): Brilliant — tons of photos taken to show you how fucked up people are when traveling, from women who put their gross, long hair all over you to pervs to people putting their nasty feet on anything that doesn't move.

THE FILM EXPERIENCE: Amazing, in-depth interview with Toni Colette, who is about to be robbed of an Oscar nomination by fill in the blank except for Glenn Close, who is robbing nobody of nothin'. (I'm guessing the noms will be Close, Gaga, Colman, McCarthy and I think Yalitza will squeak past Blunt.

GAY STAR NEWS: George Mason, 35, and Nicholas Mullan, 24, are boyfriends who decided it would be a good idea to meet a third man and have what is described as full sex in front of other passengers on a London Underground train in February. The couple has ow been charged, while the third man ... got off. Actually, he's gotten away for now; police can't quite put their finger on who he is.

SPIEGEL ONLINE: Sure, Trump picked Richard Grenell, a gay man, to be ambassador to Germany, but as Germans know, the gay man he picked is a pompous, thin-skinned mini-Trump. They loathe this tool:

They also say Grenell knows little about Germany and Europe, that he ignores most of the dossiers his colleagues at the embassy write for him, and that his knowledge of the subject matter is superficial.

Grenell has vocally opposed the pro-immigration policies of German Chancellor Angela Merkel even though Article 41 of the Vienna Convention on diplomatic relationships says diplomats should refrain from meddling in their guest country’s domestic affairs.

“The [Diplomat's] duty is to cultivate discreet contacts within the country’s government apparatus and to further their own government’s positions,” Der Spiegel writes.

Der Spiegel‘s sources say that Grenell has pushed for meetings with German legislators and their constituents, but they don’t want to be seen with him.

CNN: Trump finally responds directly to suggestions he is a Russian agent, calling it a whole, big, fat hoax. Sounds like he's found his 2020 campaign slogan:

NEW NOW NEXT: Diplo declares that “masculinity is a prison.”

INSTAGRAM: Nobody realized the kinda gross trucker Freddie Mercury is shown having it off with in Bohemian Rhapsody was a disguised Adam Lambert: