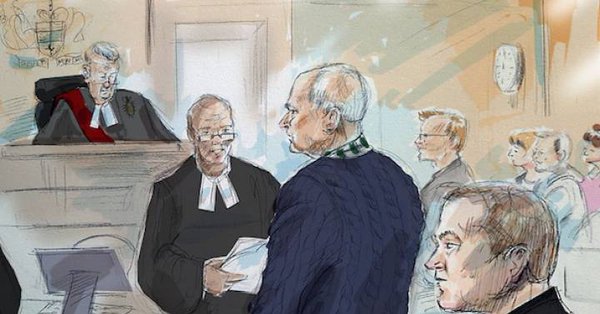 McArthur was said to have stared straight ahead throughout the proceedings. (Image via Ontario Court System)

Bruce McArthur, who was found to have murdered eight men in Toronto during what they had thought were to be consensual sexual encounters, has been sentenced to life in prison. Under the terms of his sentence, he would be eligible for parole only if he lived to age 91.

The judge could have opted for a sentence that left McArthur without a shot at parole, keeping it at bay another 25 years beyond then.

In pictures stored on McArthur’s computer devices, some of the victims could be seen staged and wearing a fur coat, a fur hat and/or a cigar in their mouths.

“He wanted to relive each murder. It spoke to his desire,” Harper noted.

“It is the broad swath of pain Mr. McArthur has inflicted that’s particularly aggravating.”

In McArthur’s bedroom, officers found a bag with duct tape, a surgical glove, rope, zip ties, a bungee cord and syringes, as well as DNA belonging to multiple victims inside McArthur’s van and on the fur coat. McArthur kept items belonging to some of his victims, such as jewelry belonging to Lisowick and Navaratnam.

Scum of the earth, truly. And some of the men would be alive today, had 32 Division Det. Paul Gauthier done his job — he found McArthur strangling a man in his van in 2016 and allowed for no charges to be filed. (He has since been charged with neglect of duty and insubordination.)