ABOVE: It's got five eggplants on Yelp. Follow HERE.

TPM: I think the possibility that Gov. Northam was so mad at fellow Dems for condemning his old, racist yearbook pic he contemplated becoming an Independent does very little to further the already, er, struggling narrative that he's a good guy after all.

POLITICO: Had not even heard that Lt. Gov. Justin Fairfax had been accused of sexual assault in the wake of Gov. Northam's racism controversy. What do you think in a case like this? The story is not strong, so much so that WaPo passed on it — it is a classic he said/she said. Do you always believe victims, no matter what? P.S. The timing stinks, however, it also makes sense in that she did come forward to journalists a year ago, and of course people are more likely to come forward if their attackers become high-profile and achieve positions of prestige.

HUFF POST: Now the Virginia A.G., a Dem, is also admitting he wore blackface to a party 39 years ago. If he, Northam and Fairfax were all to resign, a 75-year-old Republican — whose policies are undoubtedly anti-woman, anti-black — would become Virginia's new goveror. What a coup.

MICHAEL HENRY: Michael Henry addresses the obvious — that gay men are walking away from condoms — in a hilarious new sketch. The shame of it all:

CNN: Trump literally said, in his long, nasty SOTU, that 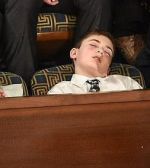 investigations into him could halt U.S. peace and prosperity. If that isn't a threat that he'll launch a war if cornered, I don't know what is.

CROOKS & LIARS: Peggy Noonan whined that Alexandria Ocasio-Cortez was not warm and smiling at the SOTU, and it earned her a patented AOC rebuke.

TWITTER: Nancy Pelosi — who is more popular than Trump, and at her own personal career-high popularity — invented a new way to clap at someone that says, “Fuck the fuck out of you, you fucking fuck.”

There's video of the clapping. pic.twitter.com/3i7MYftPUK

This is the best. https://t.co/MVWXo7Gicf

TOWLEROAD: Boneheaded gays attempted to board an Atlantis gay cruise, 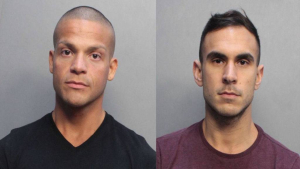 allegedly to distribute drugs. They were intercepted mainly because one of them used his government-issued computer to send emails detailing their intentions.

TODAY: People are apoplectic that B Smith — who is suffering from Alzheimer's disease — has a husband who is taking care of her 24/7 ... with his new girlfriend, who is also caring for her. I think it's so beautiful and so practical. Why are so many people married to the idea that marriage means losing yourself into another person at the expense of your own happiness? You can be totally devoted to caring for your ailing spouse who no longer recognizes you while still giving and receiving love from another:

What do you want people to know out of all of this?

TOWLEROAD: I think Sen. Cory Booker (D-New Jersey) is a bit of a grandstander who would probably be felled by something embarrassing his opponents could dig up (not the gay rumors, though suddenly dating Rosario Dawson is laughable), but he is good in many ways, and I loved his dogged questioning of Brett Kavanaugh's proposed replacement. This cavewoman is anti-equality but pretends that doesn't matter among judges, that she could faithfully put aside her personal views.

BUZZFEED: Beto O'Rourke will decide before February's over whether or not he's in for 2020.