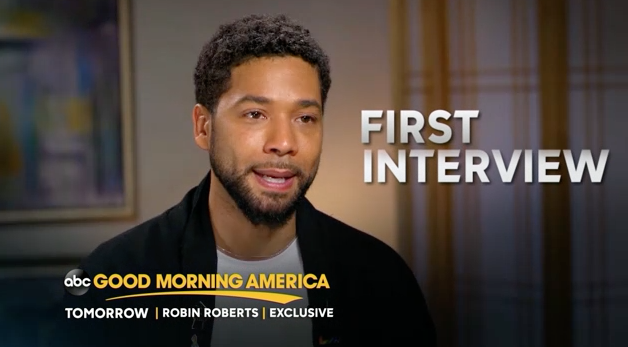 Robin Roberts — herself black and out — will be the first to interview actor and singer Jussie Smollett on his claim he was attacked January 29 in Chicago and left with a rope around his neck.

GMA will air the interview — a clip of which shows the Empire star becoming emotional — Thursday morning.

Unpleasant as it may be to contemplate, there is a chance Smollett's report will ultimately be discredited by Chicago cops. So far, they've been adamant that he is being treated as a victim, but with neighbors casting doubt on his story and with the unseemly revelation that the phone records he handed over two weeks later were redacted, and therefore inadmissible as evidence, there is a growing feeling that Smollett's story could be either false or partly false.

“We are very appreciative of the victim’s cooperation. However, the records provided do not meet the burden for a criminal investigation, as they were limited and heavily redacted. Detectives may be following up with the victim to request additional data to corroborate the investigative timeline,” Chicago police stated in an email.

The records include the hour before the alleged attack.

On the other hand, a reporter found a hot sauce bottle that smelled of bleach near the scene of the alleged crime; cops are investigating whether it could be related, but seem dubious since it was not found by their own team during initial sweeps.

In my opinion, if his story is a lie, it would not be because he is seeking publicity, it would be a mental-health issue. Regardless, the Chicago police have now invested an incredible amount of good-faith investigation into this alleged crime, so if they become confident it was fabricated, Smollett is going to be charged.