Born in Hamburg in 1933, he went to Paris as a teenager without the benefit of any formal education in the field in which he would become famous. Almost immediately, he won the coat category of what is now called the International Woolmark Prize and began working at Pierre Balmain before switching to Jean Patou. He worked for various other houses, including a decade-long stint with Chloé, ahead of his eternal association with Fendi, a brand he revamped and made hip when it was on the brink of irrelevance. 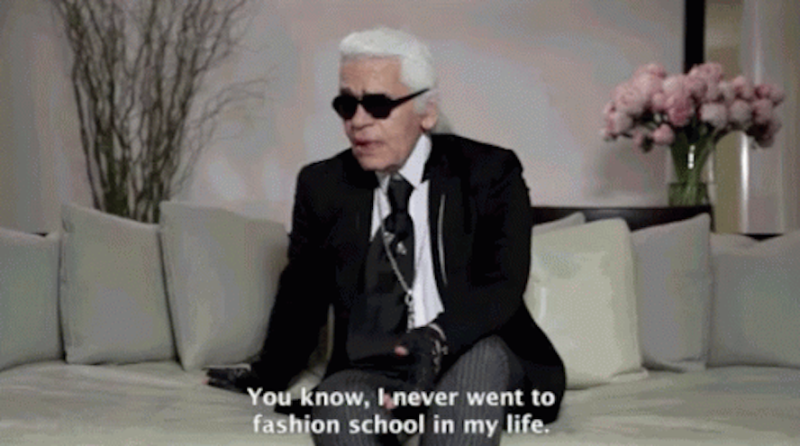 Yet, he was happy to educate others. I mean school. (Image via video still)

Animal lovers revile him for his love of fur; he is the creator of fun fur, the man who pushed for luxurious animal skins to be shaved and otherwise displayed irreverently.

“I'm a kind of fashion nymphomaniac who never gets an orgasm.” — Karl Lagerfeld

When he went to Chanel, it was a match made in heaven — his iconoclasty was never more powerful than when it was paired with an iconic, albeit staid, label. He owned the '90s with that approach, and became an unparalleled image-maker, one tailor-made for the era of social media — even if he was in his seventies by then.

“I personally only like high-class escorts. I don’t like sleeping with people I really love. I don’t want to sleep with them because sex cannot last, but affection can last forever.” — Karl Lagerfeld

His tact card, however, has.

Lagerfeld was often excoriated for his opinions and remarks, including his bashing of gay marriage as bourgeois (he later supported it), of gay parenting, of Adele's figure, of Pippa Middleton's face, of Germany for opening its borders to Muslims ... the list goes on.

Check out the doc Antonio Lopez 1970: Sex Fashion & Disco for a great side-eye look at Lagerfeld at his best and very worst.