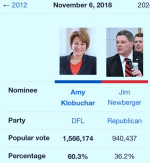 The very weekend she was blindsided by a report that she is habitually abusive to her staffers, Sen. Amy Klobucher (D-Minnesota), popular in her home state and a star of the Kavanaugh hearings, launched her 2020 presidential campaign from Boom Island Park in her snowy home state.

It was probably a welcome visual, giving her a chance to look hearty and good-humored.

Showing Midwest verve, she mocked the frigid, single-digit temperatures — “Like, are you guys even cold?” — as she made her announcement with a vow to heal the heart of our democracy and to end chaos in politics.

If you don't know the difference between a hack and a slack, it's time to pull off the digital highway.

Klobuchar is considered a moderate. She is the fifth woman in Congress so far to announce she is running in 2020, joining Sen. Elizabeth Warren (D-Massachusetts), Sen. Kamala Harris (D- California), Sen. Kirsten Gillibrand (D-New York) and Rep. Tulsi Gabbard (D-Hawaii).