5 Things You Should Know About Poppers Comments (0)

Poppers are common in the gay male 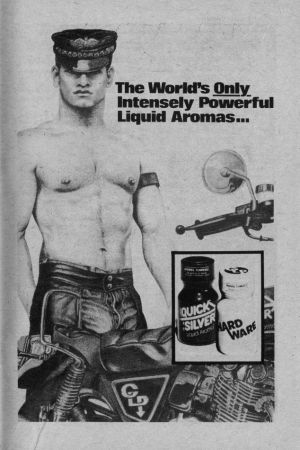 community and considered a sex or party drug. The name “poppers” is slang for several alkyl nitrites chemicals — specifically amyl nitrite. They come in tiny bottles (often brown in color) and available over-the-counter. The nitrates are strong-scented, yellowish and flammable liquids. When sniffed, the vapors go straight to your system. These are 5 things you should know about poppers.

Why Are they Called Poppers?

Poppers got their popular name from the tiny glass capsules that have amyl nitrite. Initially, the drug was used to treat angina and people used to “pop” it under the nose and sniff. These bottles got the name “poppers” from the sound they made when crushed or opened.

How They Can be Used Incorrectly

Incorrect and excessive use of poppers is harmful to anyone abusing them. The liquid is not supposed to come in direct contact with the skin since the nitrate inhalants are highly toxic. They can cause crusty and yellow skin irritations around the genitals, nose and lips.

Poppers should not be used by a person with blood pressure issues or high-body temperature problems since poppers can lower oxygen supply to major organs and can destroy red blood cells, leading to death.

Above all, one should never swallow poppers or combine them with Viagra as it can stop the heart and lead to death.

Others mix poppers with alcohol, which increases the risk of unconsciousness.

Why Are Poppers Popular?

Poppers are very popular among gay men. When sniffed, poppers can dilate blood vessels so more blood reaches the heart.

Additionally, poppers help to circulate blood to the brain, increase heartbeat and relax your muscles. This leads to an intense pleasure sensation that lasts between 2 and 5 minutes.

The fact that sniffing poppers prolongs orgasms and gives a hard erection makes them popular as well.

What Are the Side Effects?

Since nitrites are reported to boost one’s libido and sexual desire, it can be a detriment to safe-sex activities. Other effects differ as some users report a decrease in premature ejaculation. Others report increased difficulty to achieve an erection.

Clinical data indicates some popular side effects of using poppers. They include mild congestion, headache and sweating.

Some Countries Have Banned Poppers

Unfortunately, the sale or use of poppers is not allowed in some countries. Not long ago, poppers nearly became banned in the United Kingdom, although some users buy poppers online. Had it not been for the dedicated advocates who fought for this drug, the inhaler may have been banned.

In the USA, one should have a prescription to use poppers due to concerns over public health and worries over its increased recreational use.

In Canada, poppers use is not allowed. Sales without authorization are punishable by fines and imprisonment – if warranted.

Poppers were released in the '60s and have gained popularity since then. They are popularly used amongst bisexual and gay men. While poppers boost sexual experiences, they are dangerous when used incorrectly. Nonetheless, they have little and mostly manageable effects, as discussed. The better part is that they can help you relax, give heightened pleasure, turn you on immediately and keep you excited for longer.