All In The Framing: A Review Of DADDY Comments (0) 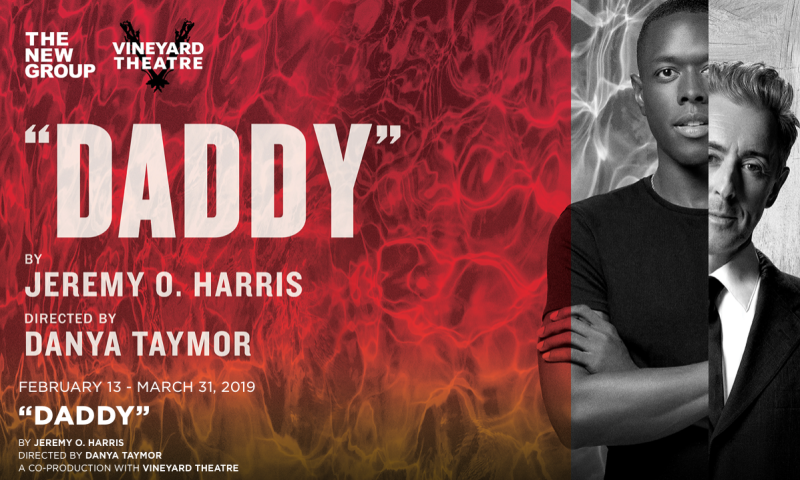 Daddy, written by Jeremy O. Harris and directed by Danya Taymor, begins as if it will be a bit of theatrical confection, a trendy, goes-down-easy play along the lines of The Blue Room adapted by David Hare or Up for Grabs by David Williamson.

And with a title like Daddy, who could blame you for thinking you were about to see something self-impressed by its cheekiness?

In short, there is nudity, as you've been told, but this is not Naked Boys Singing.

Harris's play uses the art scene in L.A. to explore race and class in a way that never feels carefully controlled in spite of numerous occasions of almost surgical insight. It is bold, rather than clean, and — more often than not — it succeeds by swinging for the fences, come what may.

The play opens on a stunningly realized mansion set, complete with a swimming pool that terminates at the front row. (Towels are provided — be prepared to use them.) Franklin and his new lover Andre are nakedly smitten with each other and, well, naked. (Towels are provided — be prepared to use them.) The exhilaration of their new, May-October romance is humorously captured, as are the reactions of Franklin's jelly millennial friends, Bellamy (Kahyun Kim) and Max (Tommy Dorfman), whose languid use of Andre's property drips with feckless entitlement ... but is Franklin sold on this new relationship?

In intimate moments, he's sold (or rather, bought?), and slips willingly into a Daddy/boy experience, complete with spanking, thumb-sucking and stern commands from a salt-and-pepper father figure (the George Michael tune figures prominently into the first act, courtesy of occasional muses Onyie Nwachukwu, Denise Manning and Carrie Compere). And what's not to love, considering Andre's ability to help Franklin achieve notice in the art world, even if the cost is a sea of snickers about the secret of Franklin's success?

Told in three acts (when two could have sufficed), Daddy gets gooood when Hari Nef arrives as Alessia, Franklin's braying gallerist, and his mom (Charlayne Woodard), in town for a visit, is arm-twisted into staying on the premises. Alessia talks herself into loving the little black dolls Franklin sews, even as his domineering mother sniffs at these “coon babies” for which white people apparently want to pay thousands.

The play becomes darker and more provocative rather than progressing toward closure, biting off more than some audiences will be willing or able to chew. But the pay-off is in a slate of assured, note-perfect performances, including impeccable work by Peet, by a scene-stealing Woodard and by Dorfman, whose portrait of a BFF with more going on inside than his blue Speedo and blond hair give away is unexpectedly layered.

Daddy is already buzzed-about as a must-see, so tickets may be hard to come by. If you locate a man old enough to be your father who's got tickets, negotiate later — just go.