He has reached a deferred-prosecution deal.

After reviewing all of the facts and circumstances of the case, including Mr. Smollett’s volunteer service in the community and agreement to forfeit his bond to the City of Chicago, we believe this outcome is a just disposition and appropriate resolution to this case.

If this isn't a case of a celeb getting preferential treatment, I don't know what is. FYI, that statement above means he fucking did it.

And to think, just yesterday everyone thought his goose was cooked when his lawyer, Mark Geragos, was implicated as an unnamed co-conspirator in the Michael Avenatti/Nike case.

"I am a man of faith, and I am a man that has knowledge of my history, and I would not bring my family, our lives, or the movement through a fire like this."

WATCH: Jussie Smollett speaks after charges against him are dropped. https://t.co/Id9kl0AfIa pic.twitter.com/lh8V8J7AHY

His family is also taking a victory lap:

Our son and brother is an innocent man whose name and character has been unjustly smeared. Jussie is a son, a brother, a partner, a champion for human rights, and a genuine soul who would never be capable of what he was falsely accused of. He was the victim of an assault and then falsely blamed for his own attack. This morning truth has prevailed and he has been vindicated. All charges have been dismissed and his record expunged (cleared). The painful incidents we’ve witnessed him endure over the past 7 weeks have been heartbreaking and unjust to say the least. While many were quick to rush to judgement before hearing the actual truth, we are grateful that the truth about Jussie has come to light. We look forward to bringing the real perpetrators to justice. We thank God and our village for standing by us during this trying time.

Interesting update: The decision-maker emphasizes Smollett was NOT exonerated, but also says the case wasn't weak; they just decided he wasn't a threat/violent: 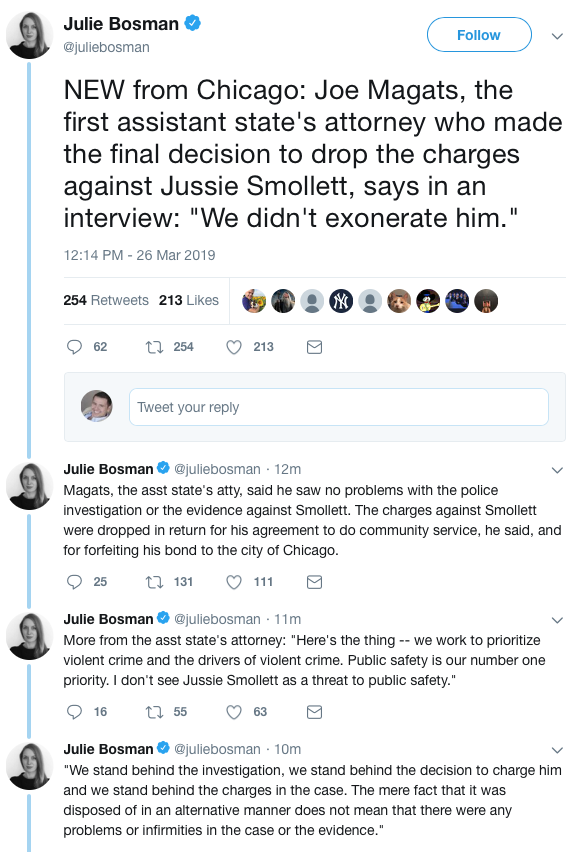