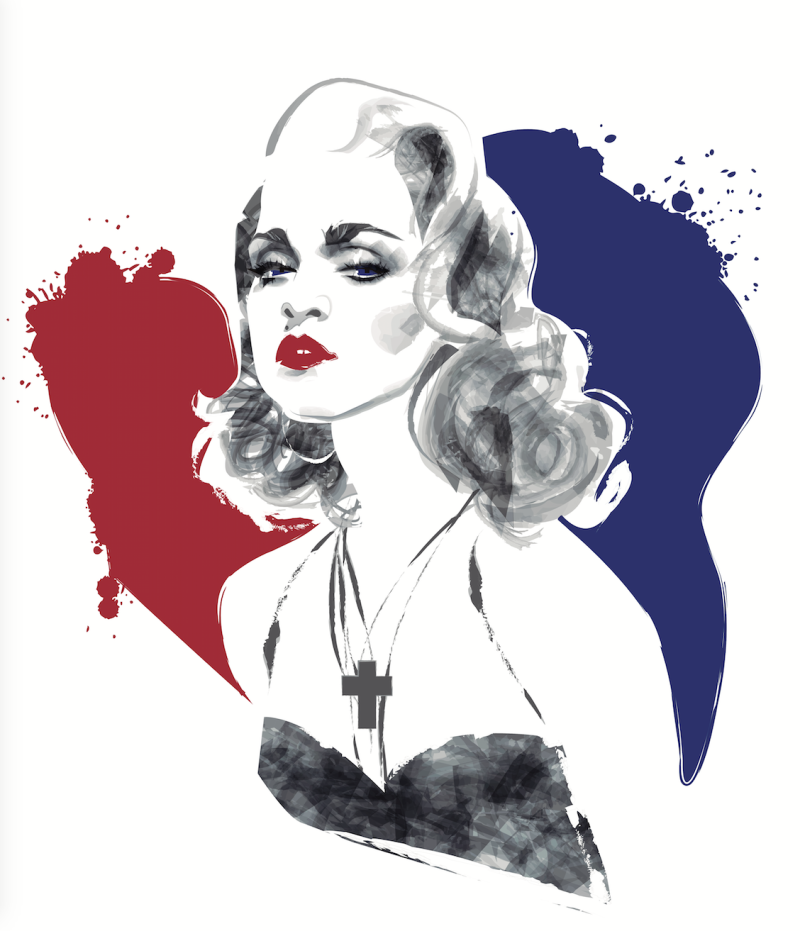 The back cover of my book with Anthony Coombs, MLVC6o (Image by Alejandro Mogollo)

Madonna's Like a Prayer turns 30 today, which is something I wish I could say about myself!

It's truly mind-boggling to think this album has been with us so long. I vividly remember buying it and being blown away by the entire thing, by Madonna's growth as an artist. My college dorm advisor, a dad in his thirties and an ex-hippie, made a point of telling me (I went to the University of Chicago, were everyone was an egghead and I was this kid with a room covered in Madonna posters) that he was shocked by how musically refined Like a Prayer was. He was impressed. 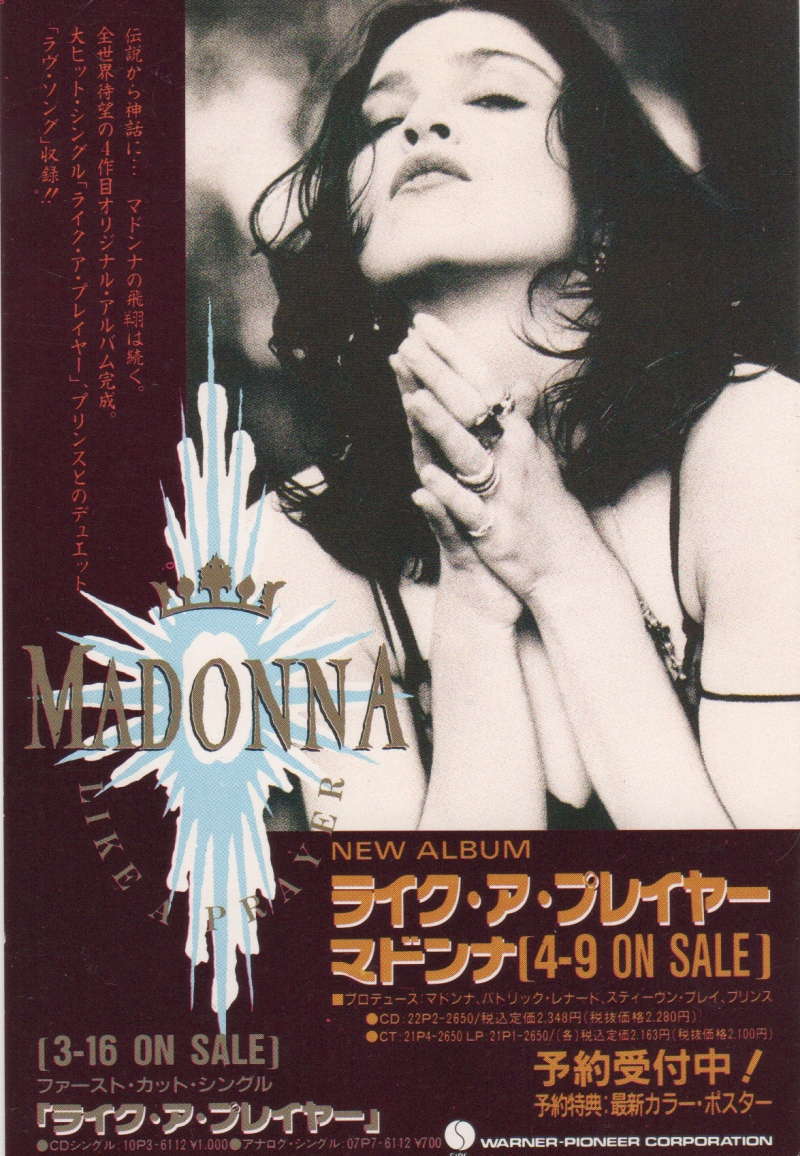 Japan always had the best graphics. (Image via Warner-Pioneer Corp.)

I went home from one of my first gay bars with a sexy, slightly older guy, Enrique (where is he now?), who played the album while we fooled around, a photo of his young daughter on prominent display as “Oh Father” — and he — throbbed.

As a Madonna collector already, I was thrilled by the slew of items to be collected — countless magazine covers, a promotional candle and accompanying triptych, even the album itself was scented with patchouli and came with an AIDS fact sheet 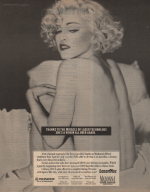 that all but announced her allegiance with queer people everywhere.

It was clear she was entering a second artistic and pop cultural golden era (the first having been 1985). I still think 1989-1991 was Madonna's prime, not that other eras did not hold peaks of perfection, and not that the future can't hold pleasures, and it was all kicked of by Like a Fuckin' Prayer, with that brunette launch, the blonde transition (thanks to Dick Tracy), then that Blond Ambition (that time when Madonna created the modern touring format, the one followed to this day by all pop stars). 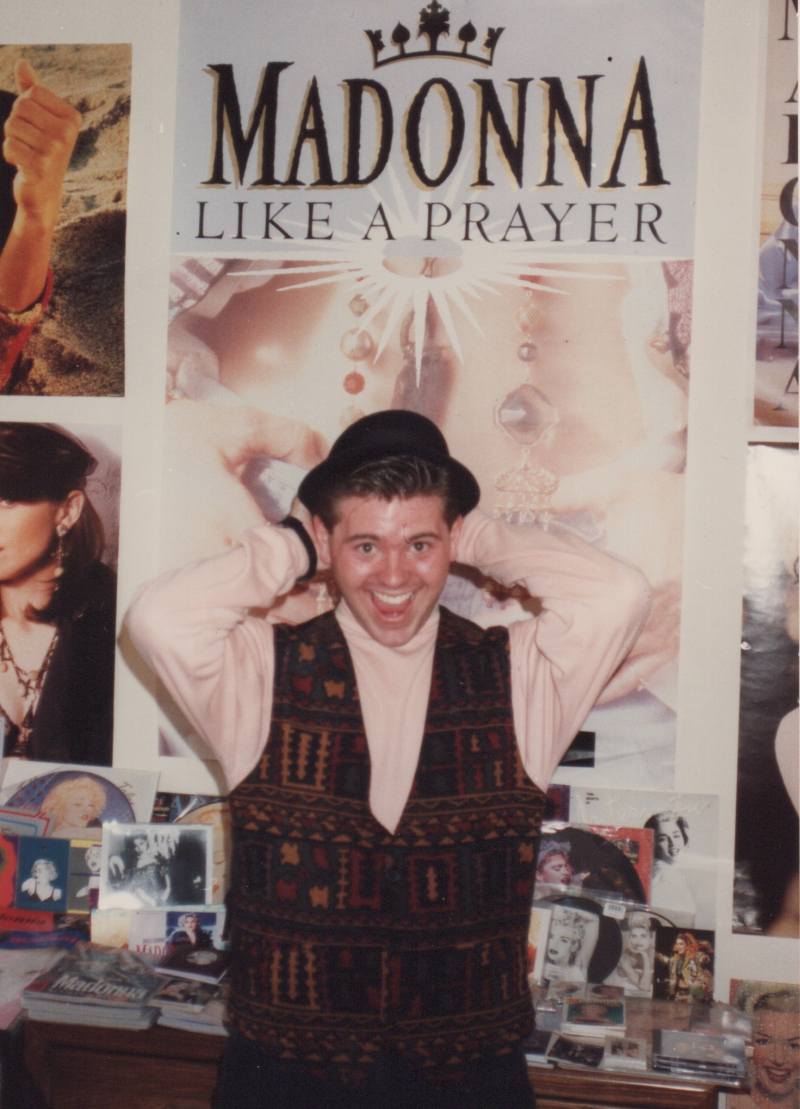 Still have the poster! (Image via Matthew Rettenmund)

The album contained some of Madonna's best singles and best album tracks, starting with her signature title track that I first heard in my dorm room, rapt. I was confused, trying to figure out where her gospel voice had been (Oh. That part's a backing singer.) and transported by how exquisitely beautiful it was. Madonna had matured, making it unnecessary for me to abandon my junior high and high school favorite now that I was in college. The album was a string of YES, from the influential feminist/gay-accessible anthem Express Yourself to more personal works like Keep It Together (if only Christopher Ciccone hadn't made that impossible) and Till Death Do Us Part, which more than hinted at the volatility of her canceled marriage to Sean Penn. She had a Beatles pastiche in Dear Jessie, ballads, even Prince's bizarre Love Song duet. It was sublime.

The visuals were exponentially more controversial and challenging and uncomfortable, from burning crosses to the image of Madonna crawling under her own chair (okay???) to lap milk from a bowl to the sight of a bona fide teen idol (which she was, still — she still appeared in teen mags then) jacking herself off live in concert on a goddamned bed. And everything she did during this era had a point; none of it was an empty #LookAtMe moment. Her cat in Expess Yourself represented female sexuality, it was not there to get spooged on.

Did Madonna ever top Like a Prayer? Arguably, she topped or matched it with Ray of Light. But she never came close, even with Ray of Light, to having as wide an impact on her fanbase and the world at large with a musical statement.

Like a Prayer is Instagram and gaffe-proof — it is a one-album legacy, and it is ageless, so calm down and enjoy all that Madonna does and says and creates, because every bit of it is icing on the cross.

√ Celebrate the album's 30th with this official Spotify playlist.

√ NME's massive look back at Like a Prayer and Blond Ambition — a must!

√ UPROXX cites Like a Prayer as the moment controversy was weaponized.

√ Please check out my book Encyclopedia Madonnica 20 here. As a teaser, here is my Like a Prayer album entry; any spacing errors are not in the printed work: 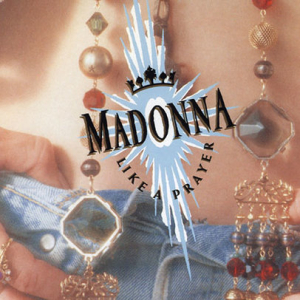 fourth studio album, and the one that became her first across-the-board critical success. Unflinchingly personal lyrics, rich vocals and sophisticated instrumentation charac­terize the work, with Madonna cowriting and coproducing every track.

Madonna consciously crafted an album that would reflect her maturation as an artist and as a woman — she had just turned 30 when work began and was appearing in Speed-the-Plowon Broadway, a job she has described as physically and spiritually draining. Madonna’s chemistry with Patrick Leonard on True Blue led her back to him, and she also turned to Stephen Bray once again for two tracks, both of which wound up as singles. For one song, Madonna collaborated with her ex-lover Prince, choosing to work with a fellow pop star for the first time, but choosing the one who was also the most serious musician of the era.

“… [A]s close to art as pop music gets. Like a Prayer is proof not only that Madonna should be taken seriously as an artist, but that hers is one of the most compelling voices of the ‘80s. And if you have trouble accepting that, maybe it’s time for a little image adjustment of your own.” — J.D. Considine, Rolling Stone (1989)

The album was recorded over the course of five months at D&D Recording (formerly 320 W. 37th. St., 4th Fl., NY, NY) and Ocean Way Recording (formerly 6050 Sunset Blvd., Hollywood, CA; now United Recording). The album’s status as an expression of vulnerability, self-determination and a desire for real love is especially interesting considering Madonna finished it and then promptly asked for a divorce from her husband, Sean Penn, to whom her previous album had been dedicated. This time around, Madonna dedicated her album to her mother, a woman deeply committed to Catholicism, a theme that makes several appearances on the album and in its ensuing music videos.

“Most of the songs … are drawn from my life, factually speaking, but it’s fictionalized, too,” Madonna explained in 1989. “Also, the overall emotional context of the album is drawn from what I was going through when I was growing up—and I’m still growing up.”

Madonna has always had better reviews than most people remember, 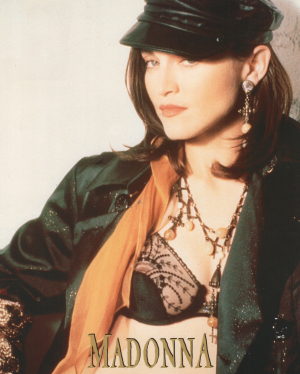 but if music critics and closet Madonna fans had been wait­ing for a good reason to reallyrave about her, Like a Prayer offered an admirable excuse. The album is even packaged to underscore the new, serious Madonna. For the first time, Madonna's face does not appear on the jacket. Instead, the cover is a tight close-up of her abdomen, her thumbs hooked into a pair of comfortable, partly undone jeans, fingers adorned with rings and sensuously intertwined with colorful beads. It’s like a female take on the Rolling Stones’ Sticky Fingers(1971).

On the back cover, Madonna leans toward the camera in a praying pose, her dark brown hair running to her shoulders. This imagery is a powerfulstatement from a woman for whom (created) looks are nearly everything. By appearing as a brunette, Madonna was officially back to her roots.

To add a bit of intimacy to the package, the album’s inner sleeve was scented with patchouli oil, so that the consumer could smell Madonna's own favorite scent when listening to her music. (She now hates the smell.) There was also an AIDS fact sheet in every copy, the first time a pop artist had ever included AIDS information with a product.

Packaging alone does not guarantee respect or praise. But the music — not so much the radical depar­ture some reviewers took it to be as a sobering and perfecting of Madonna's established brand of pop — is impressively sincere.

Album-opener “Like a Prayer” shows off Madonna's warmer, richer vocals and a soulful refrain provided by the Andraé Crouch Choir. From the moment it was heard, it was hailed as a turning point in Madonna’s music. On the album, it functions as the pop equivalent of religious ecstasy, preparing the listener for a heavenly journey.

Second song “Express Yourself” became the dance song of the year and one of pop’s most irresistible feminist anthems, opening with the indelible cry, “C’mon, girls! Do you believe in love?” It was and is the one song that most singularly sums up what Madonna is all about. You can’t get Madonna if you don’t get this song. 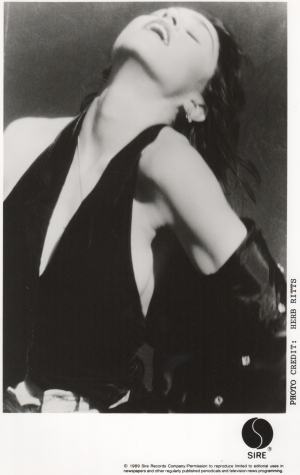 “Love Song,” Madonna's duet with Prince, is one of the funkiest things Madonna’s ever recorded, and has an uncharacteristically dissonant, leisurely feel. Parts of it come off as ad-libbed. The anti-love song “Love Song” is one of quite a few Madonna songs concerned with the slow passage of time.

“Till Death Do Us Part” follows, a vitriolic portrait of an abusive marriage that is obviously cribbed from her own marital nightmare. Its frenetic pace and Madonna’s anguished pop vocal perfectly frame the intimate lyrics; hard to believe she and Penn wound up so friendly a few short decades later.

“Promise To Try” finishes side one of the original vinyl, a tearful remem­brance of a motherwho died young, another direct reflection of Madonna's real life.

“She seems like an absolute presence in culture. Everywhere you look, there’s either Madonna herself or a kind of echo of her, and I think she’s used that … you can call it power, you can call it reach … to continually make increasingly extreme, radical and disruptive and confusing statements about everything under the sun: Sex, politics, race, autonomy — you name it.” — Greil Marcus (1990)

Side two kicks off with “Cherish,” a genuinely sweet ditty that returns the mood to hopeful. It’s one of the simplest songs on the record, but has a dense production — as is often the case in Madonna’s world, simplicity is usually the result of complex maneuvering.

“Dear Jessie” is a giddy, hallucinogenic extravaganza complete with pink elephants and lemonade that does theBeatlesproud. “My feeling when we were making Like a Prayeris we pretty much knew that the whole world was gonna hear this record and we should make a great record,” Patrick Leonard told MOJO in 2015. Done!

The Leonard collaboration “Oh Father”is a tortured bal­lad about an emotionally abusive fatherand the daughter who grows to understand—if never quite forgive—his behavior. Paired with “Promise To Try” and the following track, “Keep It Together,”the song is yet another powerful rumination on family.

“Spanish Eyes,” a ballad about the tragedy of a gang mem­ber's short life, marks Madonna’s return to a Latin theme and contains spoken-word Spanish lyrics.

The final song on the album is a twisted and jarring chant called “Act of Contrition,”whose music is looped from a back­tracking of “Like a Prayer” and whose lyrics are a sort of ironic prayer that ends with Madonna finding that her reservations for a spot in heaven have been misplaced. It’s not the kind of tune one finds oneself listening to over and over, but its echo of the album’s first track makes it reminiscent of the repetition in a Broadway score. Should Like a Prayer be a Broadway show? It has all the elements of a strong theatrical statement.

Like a Prayer marked Madonna’s third straight #1 album. It went on to sell over 15 million copies worldwide, as well as spawning several music videos that represent Madonna at her most engaged in the medium.