In the jeans (Image by Gaston McGary)

NYT: I wonder if those gays who insisted we should not boycott the U.S. holdings of the Sultan of Brunei — like the Beverly Hills Hotel — are still sticking to that belief now that Brunei is plowing forward with its plan to making homosexuality and adultery punishable by death? From the article:

Brunei has had the death penalty on the books since it was a British protectorate, but in practice executions are not typically carried out.

Homosexuality is already illegal in Brunei, with a punishment of up to 10 years in prison, but the new laws allow for penalties including whipping and stoning. The new laws also introduce amputation of hands or feet as a punishment for robbery.

BLOOMBERG: HRC is withholding a positive rating for Google because of the mega-corp's refusal to do away with an app that promotes conversion therapy. 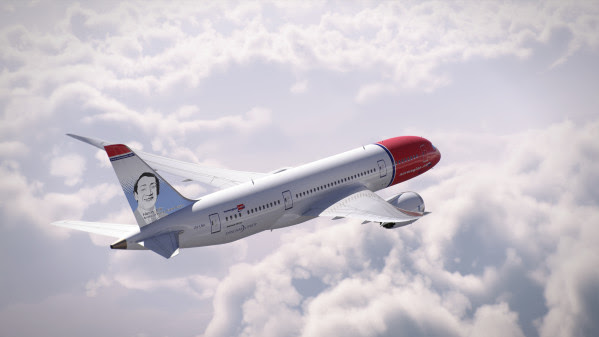 Fight for your gay flights! (Image via Norwegian)

NORWEGIAN: Norwegian, the airline that prides itself on being the world's best low-cost, long-haul airline, has made Harvey Milk its latest (and greatest?) Tail Fin Hero, honoring him by painting his face on a brand-new Boeing 787-9 Dreamliner, which will go into service by the end of this month. Harvey's nephew Stuart, co-founder of the Harvey Milk Foundation says:

We are proud to partner with Norwegian, having Uncle Harvey join the airline's forward-thinking Tail Fin Hero program that already includes change makers like Sojourner Truth and Oscar Wilde. This is such a unique way to educate and celebrate those that have come before us, allowing for their legacies to live on. We look forward to seeing Harvey flying into airports across the globe and continuing to spread his message of acceptance.

TODAY: Yikes. Jussie Smollett's own lawyer, Tina Glandian of — ahem — Geragos & Geragos, tells Today that he is not going to push for the Osundairo Brothers to be criminally prosecuted because their attack on him wasn't that brutal (!) and what he's endured by the press and the Chicago authorities since has been far worse. So, in a nutshell, his own lawyer knows he is guilty as sin and is bracing for more developments:

"If he is a victim of a crime as he contends, will he urge prosecutors to bring charges against the Osundairo brothers and will he be willing to testify?" — @SavannahGuthrie asks Jussie Smollett's attorney, Tina Glandian. pic.twitter.com/Gq7OwzRXTu

Her full interview with Savannah Guthrie here. She's got all the answers for the other stuff, but she really can't explain why he would not want to bring them to justice.

KENNETH IN THE (212): Yes, white gay men DO get to talk about Jussie Smollett.

KTLA: Trump says feds will review Smollett case, calling it “an embarrassment to our nation.” And he should know from embarrassments to the nation!

CNN: What is an actual embarrassment to the nation? Betsy DeVos's attempt to defund the Special Olympics. Joe Kennedy talks about that travesty:

VOX: Trump has been lying forever about having a healthcare plan in place. He has nothing! He simply wants you to have NO healthcare, and to pay for it your damn self.

TOWLEROAD: Basketball great Tim Hardaway, just over 10 years ago, IDed as a proud homophobe. Called out on it, he did what few have — he completely changed and became an LGBTQ advocate, more than just apologizing. Now, he says he thinks his initial mistake has cost him Hall of Fame status.

JOE.MY.GOD.: NRA and Infowars teamed up to try to spin a conspiracy theory about the Parkland shooting. These people are insane and dangerous. This news comes the same week a Newtown dad killed himself after years of hectoring by conspiracy theorists — and his death was promptly the subject of a new conspiracy theory promoted by Alex Jones, who claims it was murder to silence Jones and do harm to the First Amendment. Messam didn't sound too polished in his CNN interview, but I guess anyone can run? (Image via CNN)

CNN: Wayne Messam, a Florida mayor, has announced he is running for president: