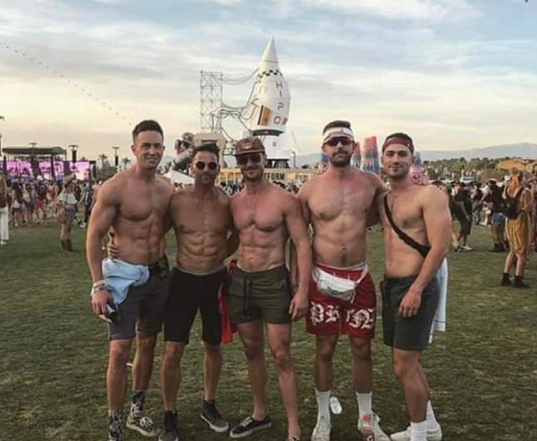 This isn't Dick-Fil-A — the guy was a congressman and voted against gays. (Image via Twitter)

UPDATE: 2 of the men in the photo have apologized.

From the closet, he voted against gay marriage, against rescinding Don't Ask, Don't Tell and more, and then he left office due to financial irregularities that he seems to have gotten away with.

Who are these assholes partying with him, and how can they overlook recent history so blithely? There are plenty of other hard bodies out there. Have some fucking self-respect.

This unrepentant douche, who is paying back the $68K he was once accused of deliberately stealing, recently even suggested he could return to politics, but interestingly enough, he is already laying the groundwork for being seen as some kind of moderate:

I'm not running for office right now but I would identify more as a Republican than a Democrat. But I suppose if you looked at my voting record in Congress they'd think I was a moderate. It's all relative, right? I also thought Republicans were for free trade. Things change with the times.

If you're gay, you should never see yourself more as a Republican than as a Democrat because Republicans see you more as a f*ggot. The GOP platform is crystal clear — it's anti-gay. They welcome gays to shame themselves by voting for them and donating to them and being elected within their ranks, but their positions are all anti-gay, and so were Schock's, at least publicly, where it counted.