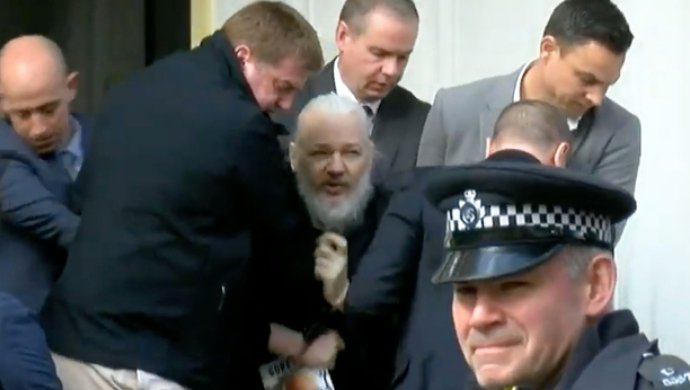 This is a very satisfying image — Julian Assange of WikiLeaks has been dragged from the Ecuadorean Embassy, where he's been holed-up for seven years — and arrested.

I would love to see this happen to Trump ...

Ecuadorian president Lenin Moreno said in a video statement Thursday that his country withdrew Assange's asylum due to his "discourteous and aggressive behaviour," "the hostile and threatening declarations of his allied organisation against Ecuador" and "the transgression of international treaties."
Assange "violated the norm of not intervening in internal affairs of other states," Moreno said. "The most recent incident occurred in January 2019, when Wikileaks leaked Vatican documents. Key members of that organisation visited Mr Assange before and after such illegal acts," he added.
In July 2016, WikiLeaks published nearly 20,000 emails from Democratic National Committee staffers that appeared to show the committee favoring presumptive Democratic nominee Hillary Clinton over Bernie Sanders during the US presidential primary.
Assange then told CNN's Anderson Cooper that the email release was timed to coincide with the start of the Democratic National Convention.
A US court filing in November 2018 inadvertently revealed US government efforts to criminally charge Assange.