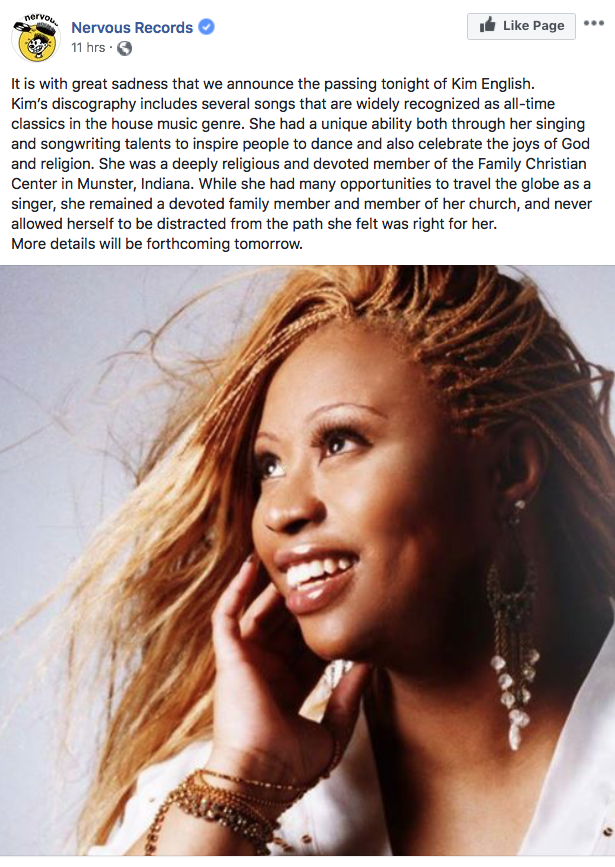 Kim English, a Chicago vocalist with a string of #1 U.S. Club/Dance chart hits from 1994-2009, died April 2, according to a remembrance from her record label.

Affiliated with Nervous Records NYC throughout her long and successful career, English was eulogized by the company on Facebook:

It is with great sadness that we announce the passing tonight of Kim English. Kim’s discography includes several songs that are widely recognized as all-time classics in the house music genre. She had a unique ability both through her singing and songwriting talents to inspire people to dance and also celebrate the joys of God and religion. She was a deeply religious and devoted member of the Family Christian Center in Munster, Indiana. While she had many opportunities to travel the globe as a singer, she remained a devoted family member and member of her church, and never allowed herself to be distracted from the path she felt was right for her. More details will be forthcoming tomorrow.

English's first single was the Ten City-written and -produced “Nitelife” in 1994. She first charted on Billboard's U.S. Club/Dance chart with the follow-up, “I Know Place” (1995), and took the pole position with her signature release, 1999's “Unspeakable Joy.” She went on to have eight #1 hits on the chart and a total of 13 songs that made the Top 40, never tasting mainstream Top 40 success, and yet becoming a staple anywhere that embraced dance music.

In the U.K., her debut single went Top 40, and three others hit the Singles Chart as well.