Mad Dashes: A Review Of WILD NIGHTS WITH EMILY Comments (0) 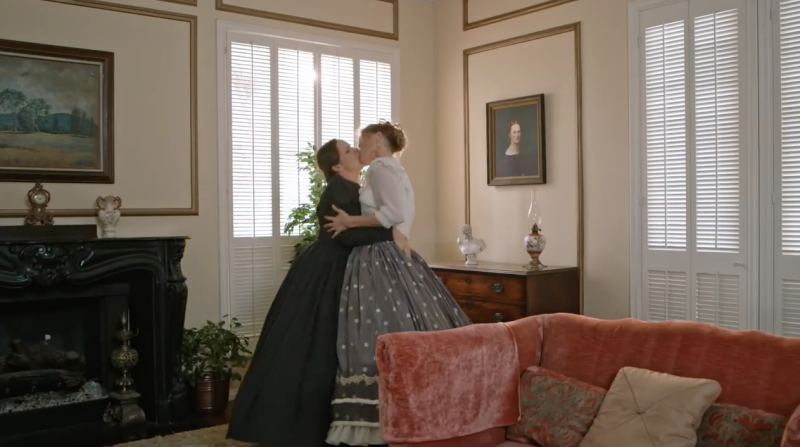 In Madeleine Olnek's subversively whimsical Wild Nights with Emily, the poet Emily Dickinson (played with mirthful, lusty intensity by Molly Shannon) is given the life she probably actually had — passionate lesbian who tried her hardest to have her game-changing poetry published — rather than the solitary, sexless, hermetic life we've always been told she had. Forget about gimmicks like imagining her as a zombie when history has never dared to truly imagine her as she was — a woman-loving woman whose legacy was shaped by a person with every motive to warp and distort it. 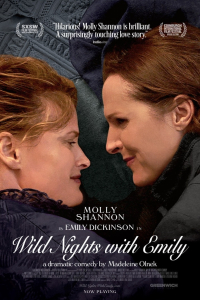 of Dickinson's life, as does the clever construct of having the character who first published (and significantly altered) her works, Mabel Todd (Amy Siemetz), narrating to a group of rapt Dickinson fans the phony story of how Dickinson was anti-social while the film shows us Dickinson aggressively pursuing publication and the intimate affections of her sister-in-law, Susan Gilbert (Susan Zeigler). Todd is portrayed as a shallow creature, one who capitalized on Dickinson's death — she was Emily's brother's lover, so was for years close to her — and who attempted to absorb some of Dickinson's genius when her own efforts at being creative flopped.

Olnek's take, while often giddy, is just as often poetic in its own right, thanks to stray visuals that haunt and a respectful treatment of Dickinson's poetry, which is showcased magnificently, reverently. “It doesn't rhyme,” Susan tells the love of her life, to which Emily, a feminist in petticoats, replies evenly, “I know.”

She knew, and we should have, and we now do, thanks to research that has shown the passages in Dickinson's work where Todd erased Susan's name and the poet's beloved, quirky dashes. It's in those spaces that the real Dickinson lived and loved, and she could not have asked for a more compelling psychological portrait than the one Olnek has crafted.

Wild Nights with Emily is in theaters now.