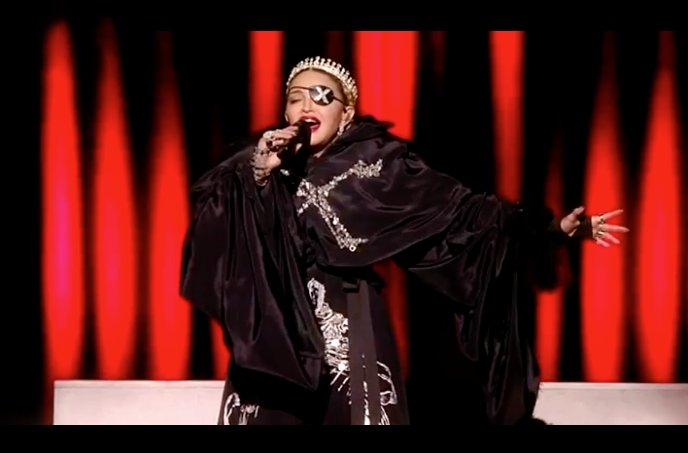 Like a Middle East peace talk (Image via screen grab)

GUARDIAN: Madonna's “Like a Prayer” had a couple of bum notes and her “Future” with human dead zone Quavo was vocoder fetishism run amok, but her Eurovision performance is ruffling more feathers for a should-be-reasonable political message: Urging unity. Without the legendarily bland contest's approval, she included dancers with Israeli and Palestinian flags embracing, an element of her show that had not been pre-approved. If the show was not A+ for the ears, it was A+ for the eyes — and it was challenging, literally ending with an exhortation to, “WAKE UP.”

Hilariously, Eurovision's statement on the matter is that Madonna was made aware Eurovision isn't political.

Well, Eurovision was made aware that Madonna is political — don't pretend you didn't know she would address the apartheid elephant in the room.

P.S. As if telling on herself in advance, Madonna told the presenter music can bring people together — and that is clearly what the message of her performance was:

"Let's never underestimate the power of music to bring people together" - @Madonna, at the Grand Final of the Eurovision Song Contest 2019.#DareToDream #Eurovision pic.twitter.com/18RF5r0Kq3

EXTRATV: Arnold Schwarzenegger was brutally kicked in the back while he was in South Africa at a charitable sporting event that bears his name. He later took to social media to say he was okay, and to try to deflect attention from the young man who took a flying leap at him.

NEWSWEEK: Dozens of students and faculty walked out of Mike Pence's Taylor University commencement address — and it's a Christian school. In his home state.

TRUE CRIME DAILY: An OSU team doc who died in 2005 is alleged to have molested at least 177 male students.

YOUTUBE: I'm not a fan of 19-year-old beauty-influence millionaire James Charles. I don't get him at all. But that Tati Westbrook is a grown-ass woman who didn't need to try to trash him in 40-minute video, and her accusations of his sexual impropriety were ridiculously overblown. Also, Jeffree Star is a talentless creep. Part of James's 40-minute defense? He's actually a virgin: