ABOVE: Joe Penny for your thoughts? More here. 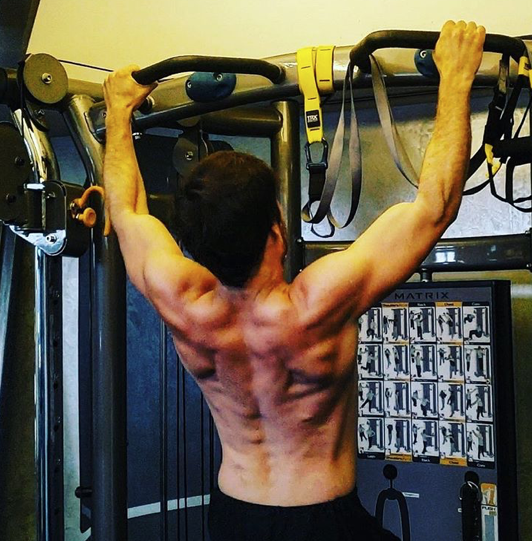 CINEMA BLEND: Ian Somerhalder wanted to update us on V-Wars, so he took off his shirt. Where's the Bacon? (Image via Showtime)

as part of a Stonewall 50 special, featuring prominent LGBTQ figures:

Who you sleep with is no one’s business. But being open and public about your sexuality and identity is the most important thing each one of us can give to our cities and communities. Without visibility we have no power, we have no identity, we have no community. Period. We’re all alone if each one of us is not visible and honest.

HUFF POST: Bernie Sanders would erase ALL student debt. I am 100% for this. We can afford it, it is positive, it would be a boon for the economy and a leg up for a generation choked by the fact that previous generations are living and working longer — so what if we didn't get grandfathered in? That's on us for not electing the right leaders in time.

JOE.MY.GOD.: Alarming — acceptance of LGBTQ people has declined among young people. Overall, it held at 49% (it has been as high as 53%), but young Americans, ages 18-34, went from 53% to 45% positive and comfortable with LGBTQ people. The decline has been attributed to the rise of Trump and targeting by right-wing sites. Court is in session. [Image via Kenneth in the (212)/video still]

TOWLEROAD: GoFundMe has told anti-LGBTQ rugby star Israel Folau to GoFHimself — suspends his ask for funds to cover his legal expenses in the wake of his sacking for espousing anti-gay hate. Worth noting:

It’s no longer about religion, it’s about YOU and YOUR greed.@IzzyFolau 🤦🏼‍♂️ pic.twitter.com/mdywzaw1ha

TRUE CRIME DAILY: Charlottesville murderer of Heather Heyer is asking for mercy in his sentencing.

BILLBOARD: Madonna achieves her ninth U.S. #1 album with Madame X. Her other studio albums were all Top 10, including one at #8, one at #3 and the rest at #2. She also just racked up her 47th #1 on the Dance Club Songs chart. Also, your periodic reminder that Madonna has been a full-throated LGBTQ ally for decades:

BROADWAY WORLD: David Mixner is set to be honored at the GMCLA 40/Stonewall 50 concert for his six decades of activism.

TWITTER: E. Jean Carroll, the writer who came forward last week to allege a rape by Donald Trump in the '90s, sounds fed up with the fact that no matter how many women come forward, nothing happens. And to prove her point: NONE of the Sunday talk shows brought up her rape allegation this weekend:

E. Jean Carroll on Trump denying rape accusation she made against him: "With all the 16 women who have come forward, it's the same -- he denies he, he turns it around, he attacks, & he threatens. Then everybody forgets it, & then the next woman comes along. And I am sick of it." pic.twitter.com/OuP20AvKTF