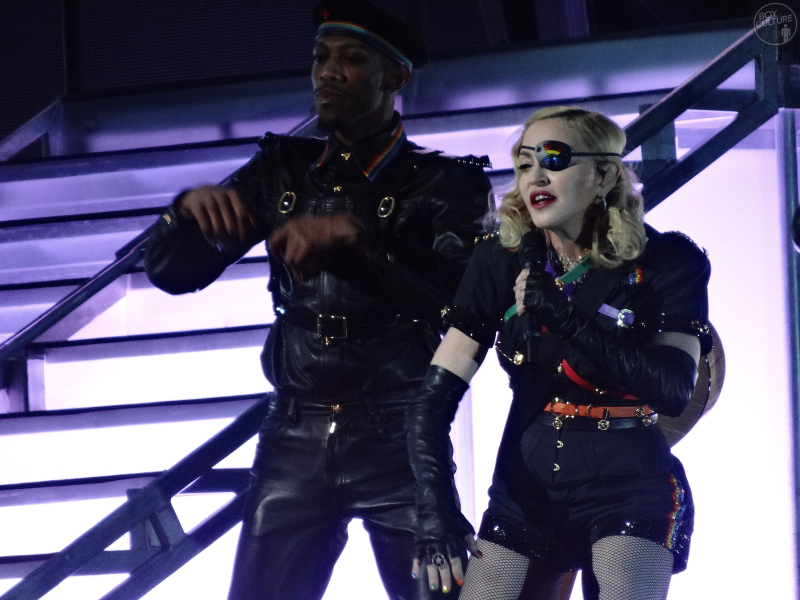 Take a rainbow. (All images by Matthew Rettenmund)

Madonna wowed 'em at Pride Island Sunday night, delivering a highly produced, tightly choreographed, four-song set that was miles away from the fast-and-dirty shows usually offered at the Pier Dance. 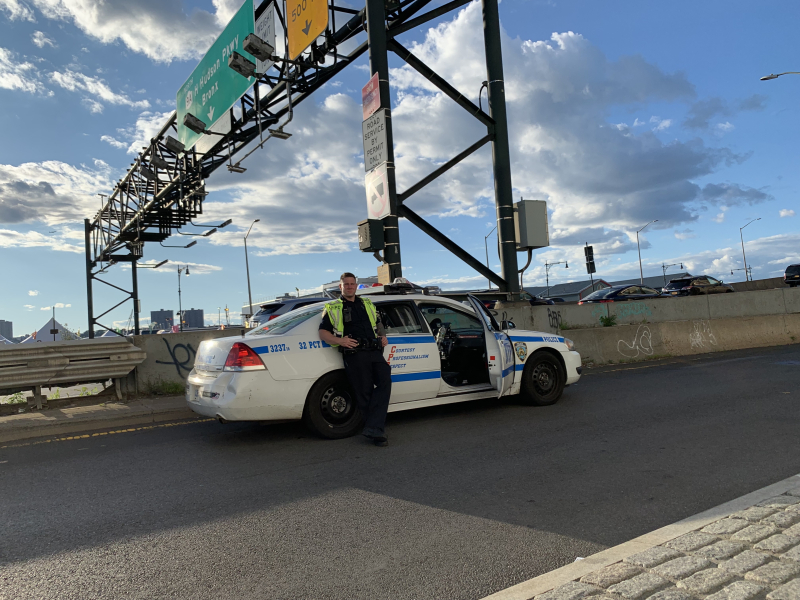 On the way to Madonna, some gun patrol

I covered the parade all day (and it went on until something like midnight!), so had to rush over to Pride Island (57th St. and the river), arriving around 7. 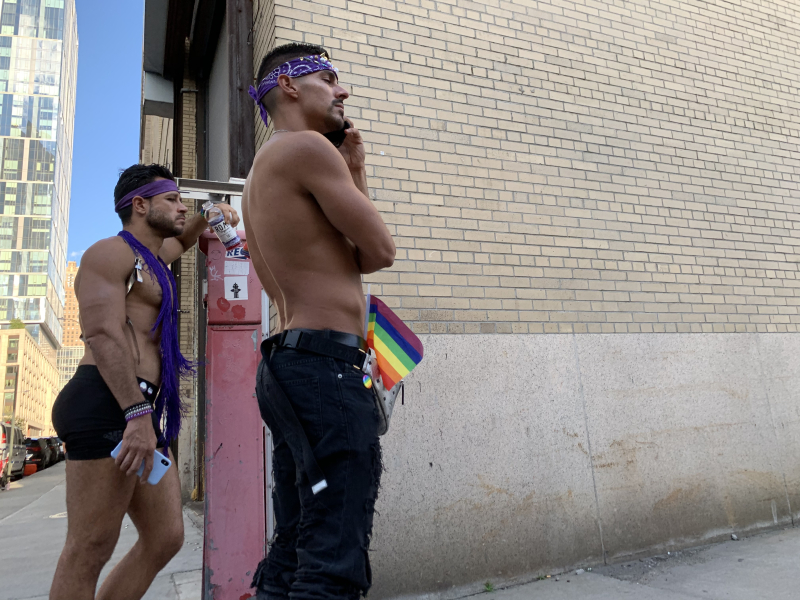 The scene outside the venue 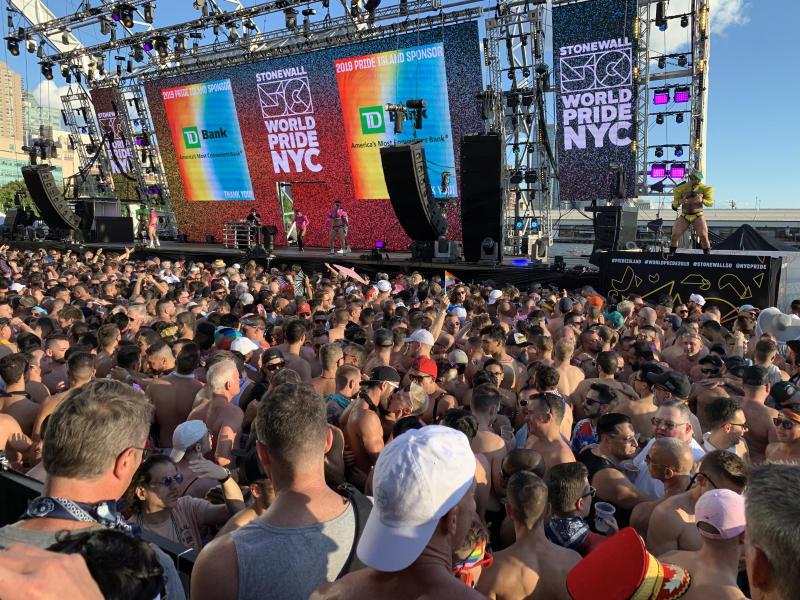 The scene inside the venue (HELLISH) 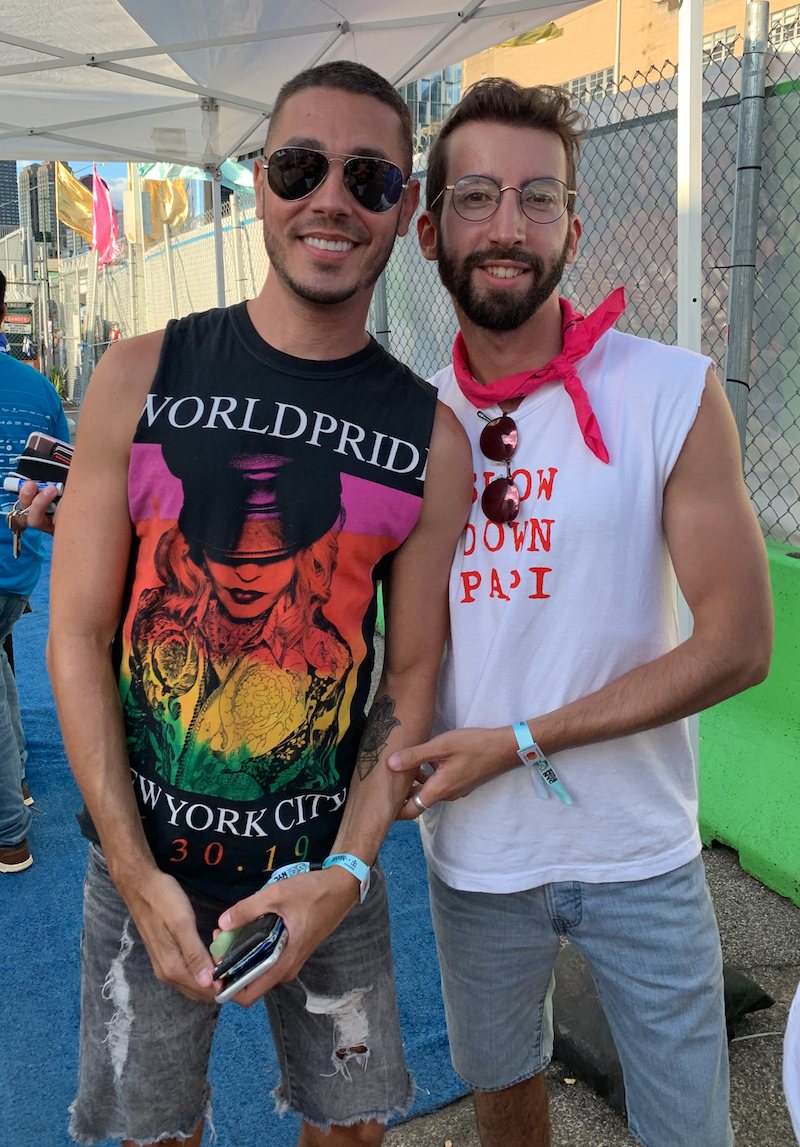 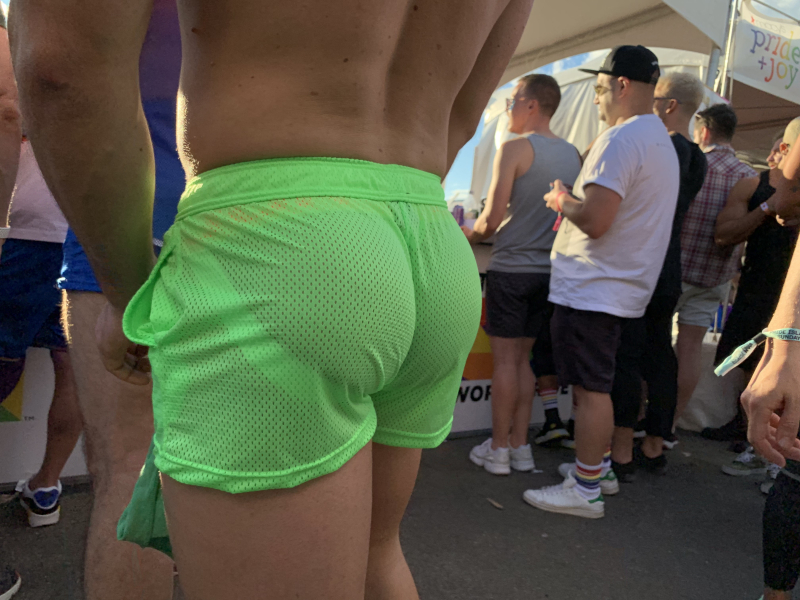 Having been to the Saturday version — 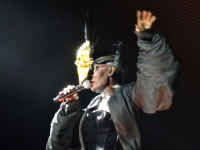 with a meh Grace Jones as the headliner; she is an icon but feels like she is doing a corporate gig at this point — I knew my VIP wristband allowed me onto a raised area just behind the floor. For Grace, I was off to the side, and the photos were crap. For Madonna, I plunged into the more central part, just a few feet from where Donatella Versace was chilling in a VVIP area, along with some of Madonna's kids. 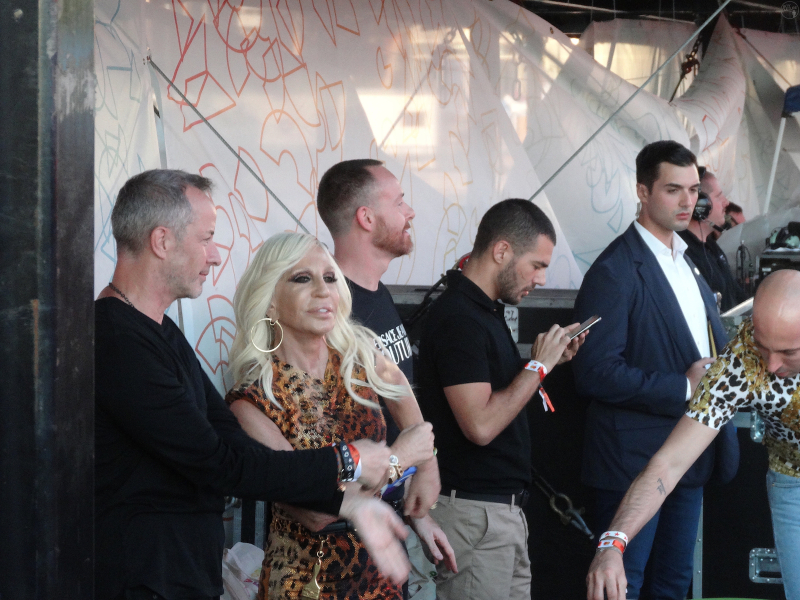 Donatella was received like a brand-new bottle of poppers.

The problem was trying to get as close to the front of the VIP area as possible, and I had the misfortune of suffering a rapid-heart-rate event. I get these occasionally. Used to be monthly, if that, and now it's twice a week. My doctor thinks it's stress/panic-related, and I think it seems to come on when I inhale sharply instead of taking a more natural, deep breath, but one happening while I was enmeshed in a crowd does reassure me it is panic and not something worse. (I just wore a heart monitor for a week, so I'll find out more soon.)

Anyway, I had to lower my head and grasp at the railing to steady myself, all the while gaming out how to get closer. At one point, two guys left, never to return, so I was just one body away from the railing. There was a big guy to my left and one to my right, and the one to my right was NOT having any pushing, etc., so I spent a lot of time resisting pressure from my left so as not to have him think I was pressuring him. Miraculously, a damned fool behind us at one point aggressively grabbed the railing over me, trying to wedge between us, and the big guy turned and physically pushed him away. I filled the gap and was able to stand sideways, front-row (second-tier) all night, where I chatted with the space's defender (thanks!) and the visiting couple to my left, who were extremely friendly, mature, warm-hearted circuit types who were helping to keep the peace all around, including below, where we watched several fights brewing over the impossibly crowded conditions.

There was an excellent DJ to keep people occupied (yes, he played Gaga ... and the Weather Girls ... and ended with Donna Summer), and then Madonna came on around 9:30. 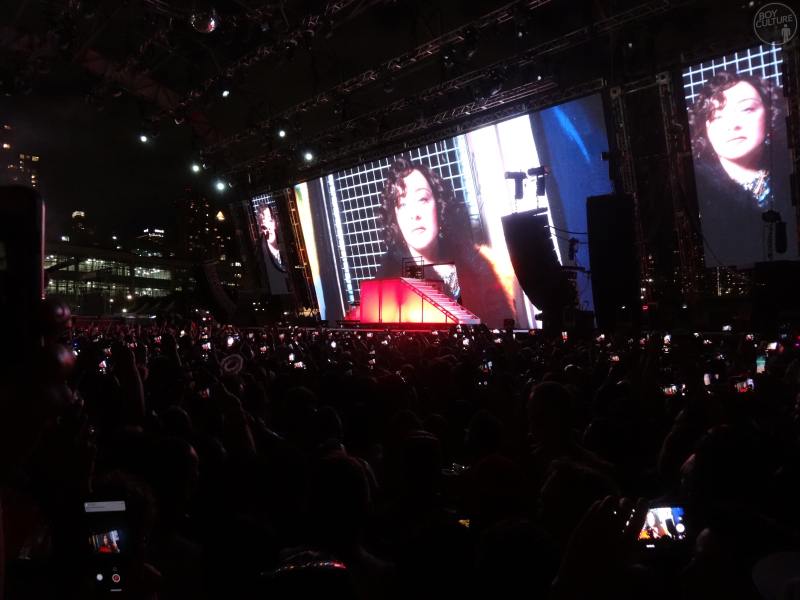 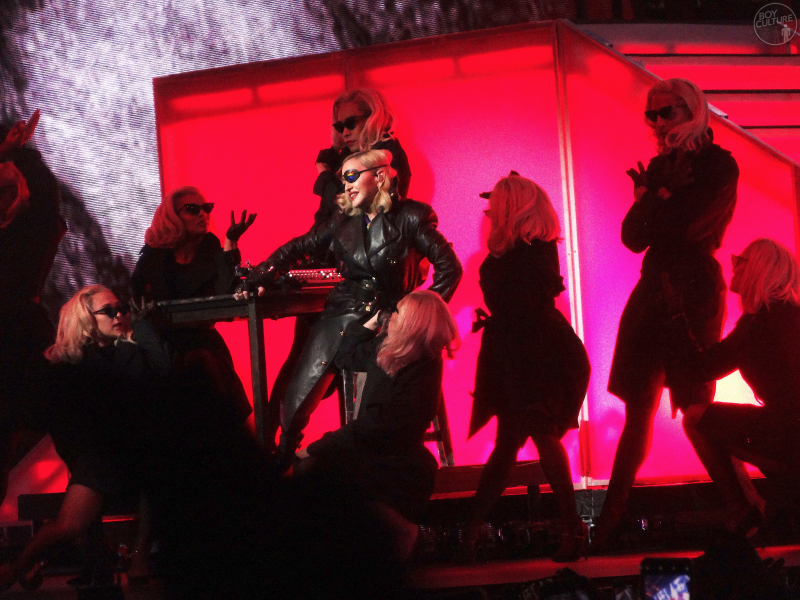 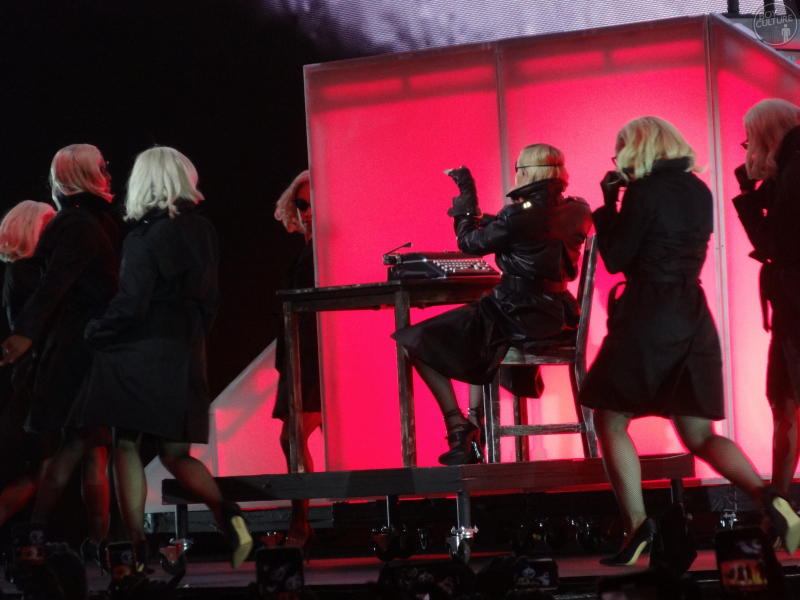 Madonna is my type.

The opening — following a snippet of “Extreme Occident” — was the part that will have most people talking, a clever new take on “Vogue” that found a gaggle of Madonnas in Madame X wigs and trenchcoats gallavanting around, distracting us until Madonna appeared atop a flight of stairs to ask the song's immortal opening line. 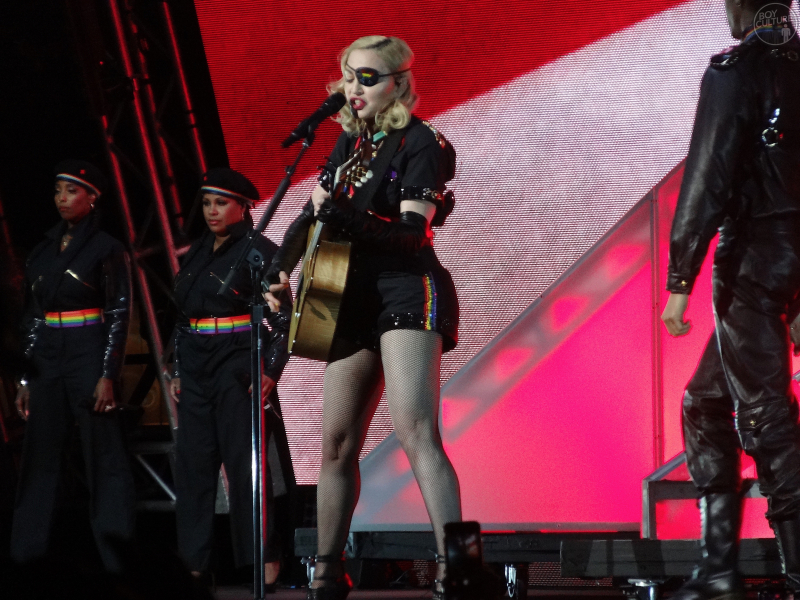 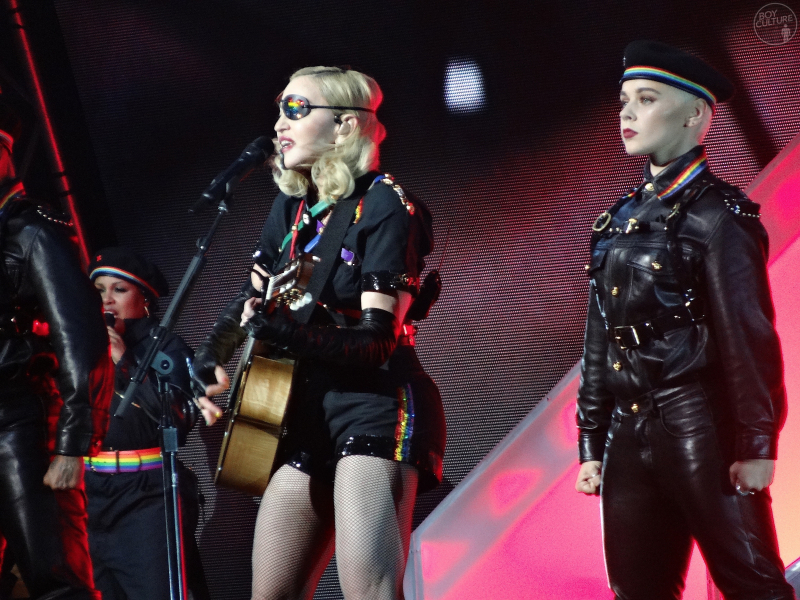 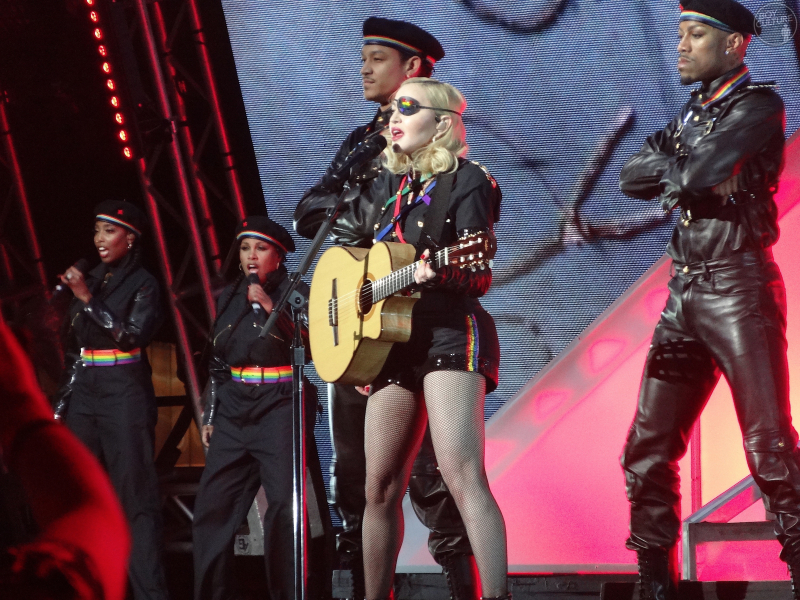 It was a tightly choreographed version, and her strong vocal was loud and clear over the track, a rarity for this song. She launched into the ill-advised “American Life” (if you're doing four songs at the pier, why this one, right?), and totally sold me on why she had chosen it — that bassline is, come to think of it, killer, and she sounded great on it, in spite of mixing up “boy” and “girl” in the beginning. (Haven't we all this weekend?) 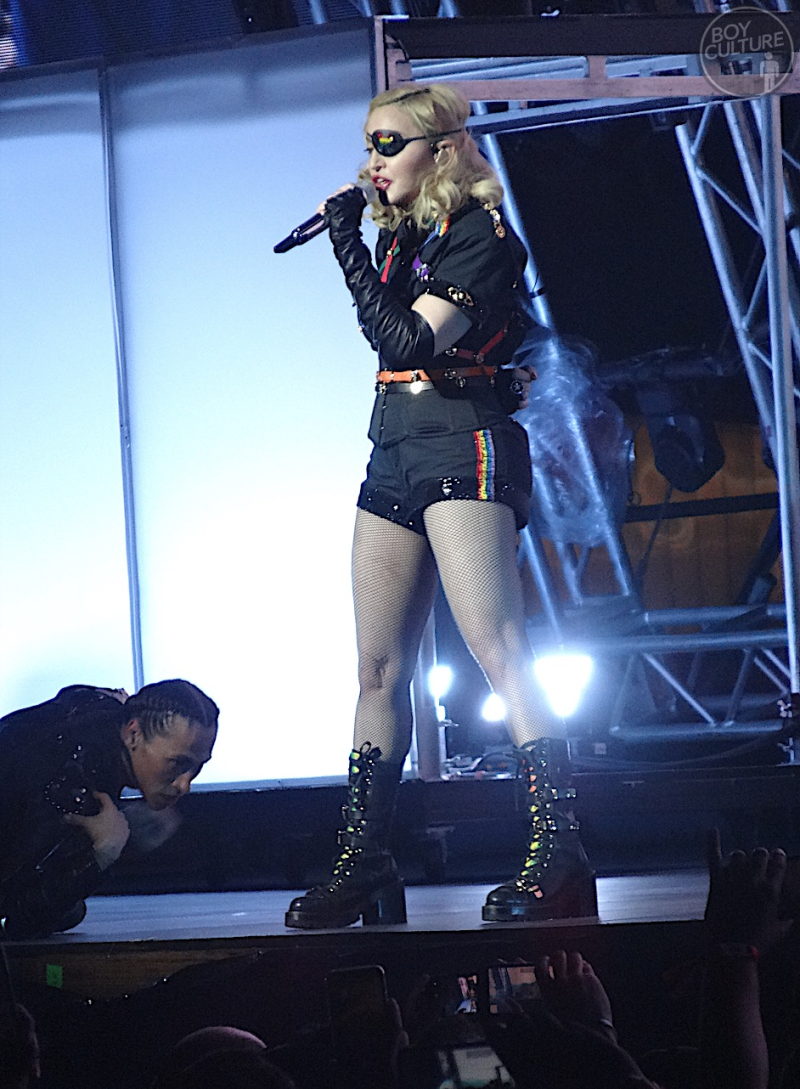 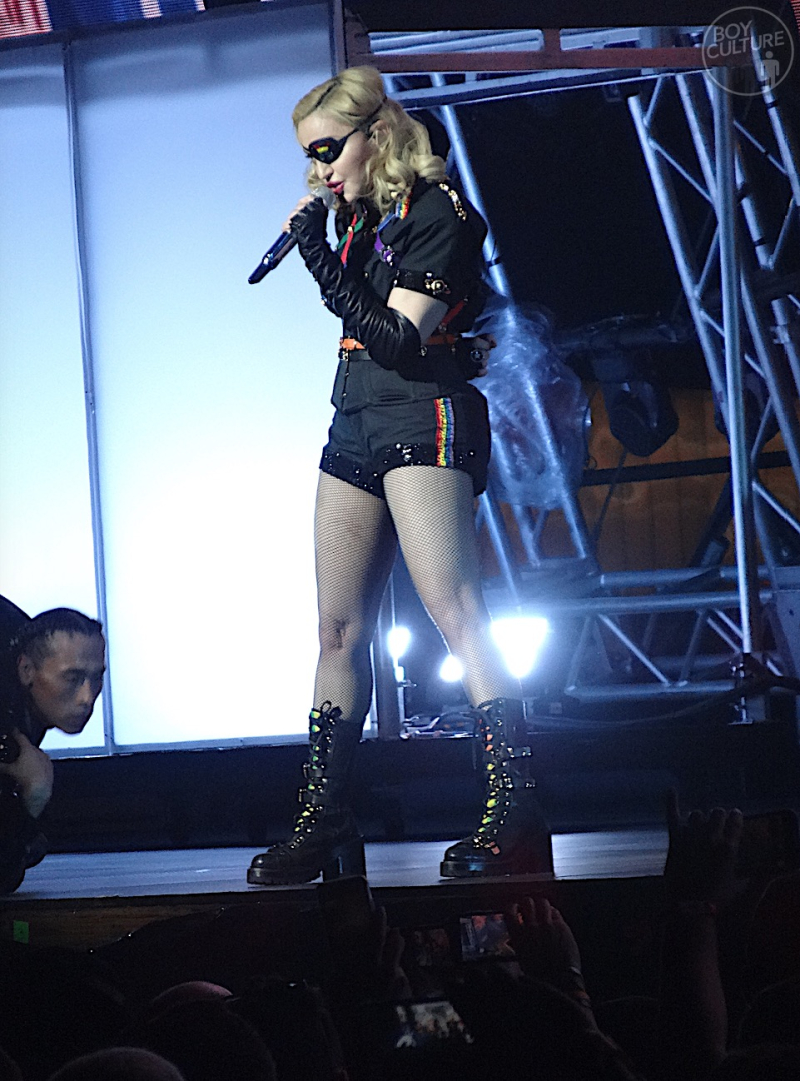 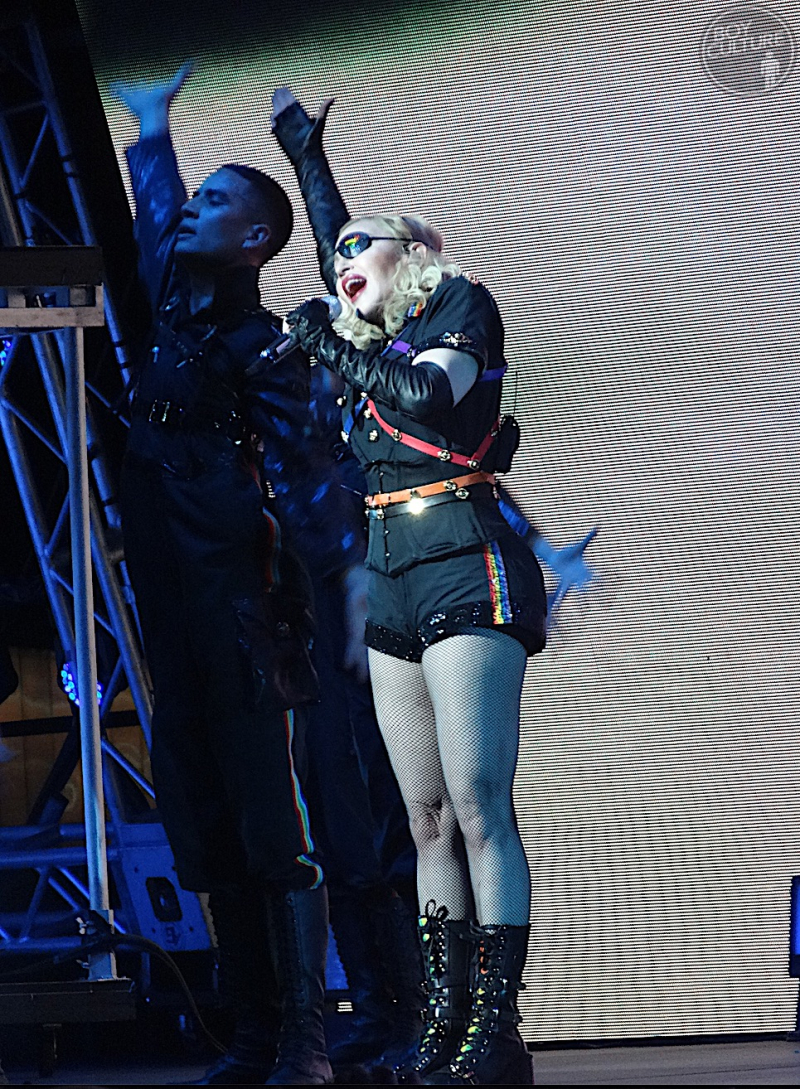 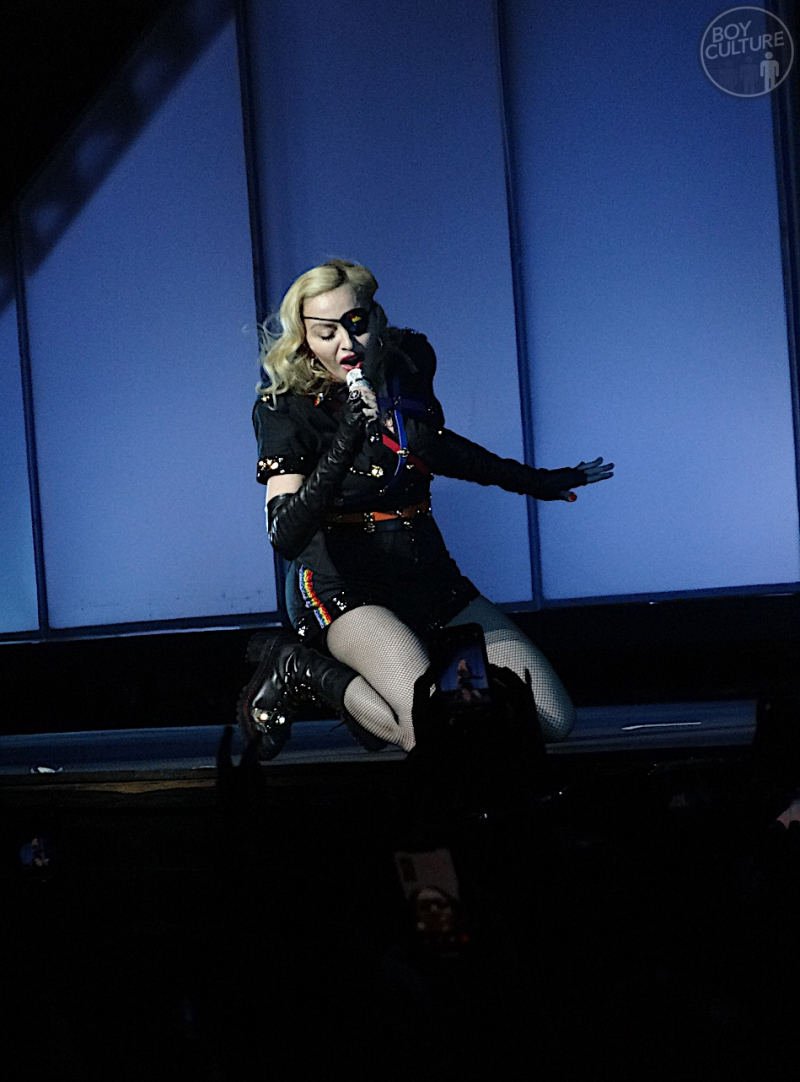 The rainbow-accented outfit was great, as were the boots.

Beaming, she launched into a more-than-four-minute speech about how grateful she is to the LGBTQ community for making her feel special from day one, urging us to keep fighting and never bow our heads.

She also included a hilarious episode in which she called out a leather daddy to take off her boots so she could put on her Donatella-granted boots. Then, she thanked us for supporting the themes on her new record Madame X, turning in a thrilling performance of her controversial “God Control,” complete with riot police. It's an epic song, and it received an epic staging. 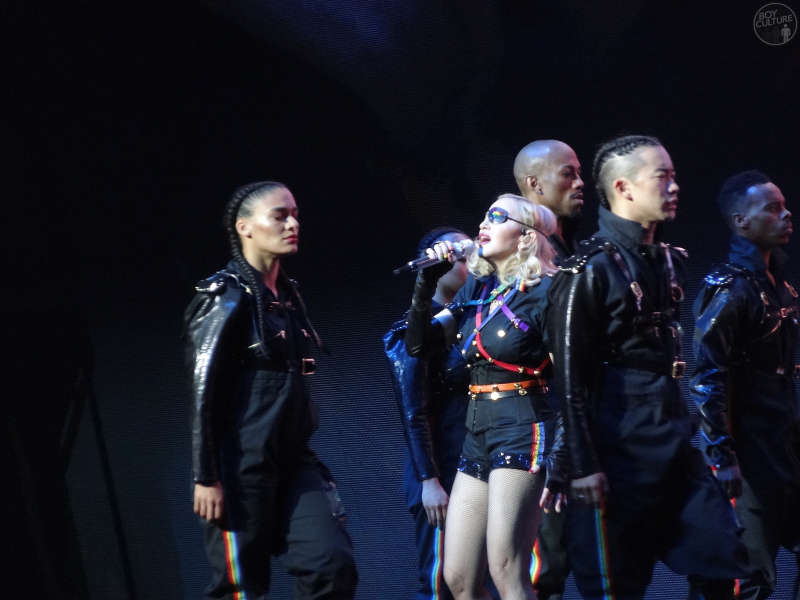 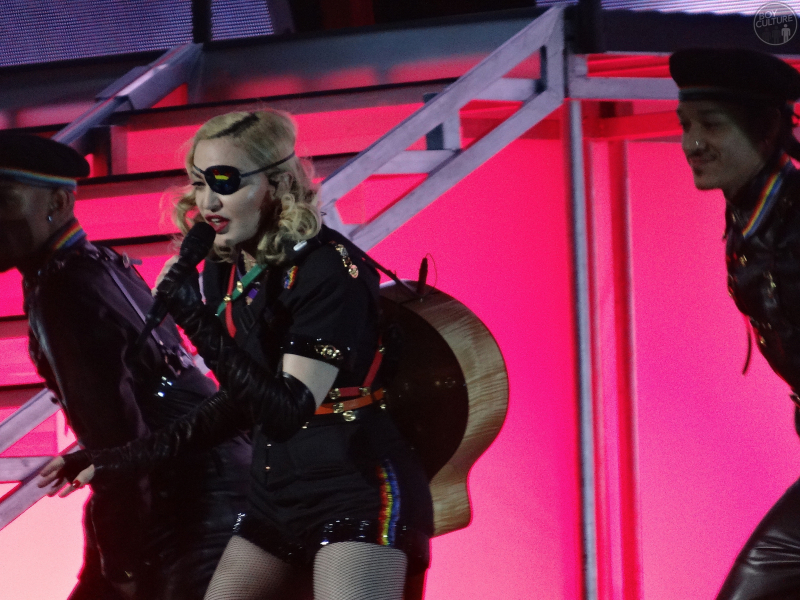 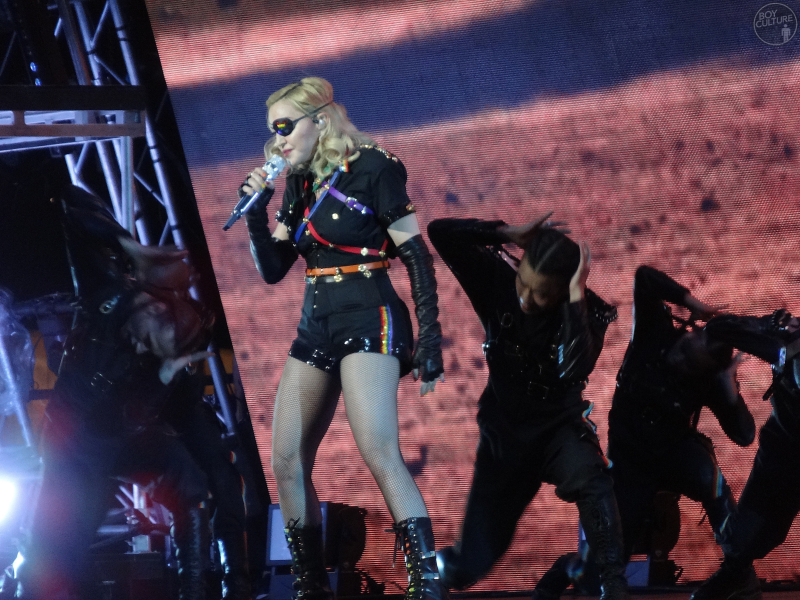 I'm glad we weren't singing “Rain” — the venue was evacuated each day due to T-storm activity, but not when Madonna was on.

Finally, Madonna gave us her gay anthem “I Rise,” which is really more of a general empowerment anthem. The song's video played behind her, and included images of Emma González, the Parkland survivor who this weekend savagely criticized Madonna for her “God Control” video, demanding a warning (there always was one) and demanding that she donate monies to anti-gun groups (Madonna had partnered with numerous such groups, who were thanked by her and who thanked her when the video dropped). I think the concept of a trigger warning is a problem (I can't bear to use the lazy, conversation-killing “problematic”) in real life — I begrudge no one for having things that trigger unhealthy emotions and flashbacks, but the rest of us have to deal with those things. A re-enactment of a club shooting as a way of sparking debate and awareness is not, to me, worse than showing images of those killed in war, or that image of the father and daughter who drowned in the Rio Grande; I understand why some can't handle it, but that shouldn't take precedence over reality.

How many times have we all seen the Twin Towers collapse with no warning? 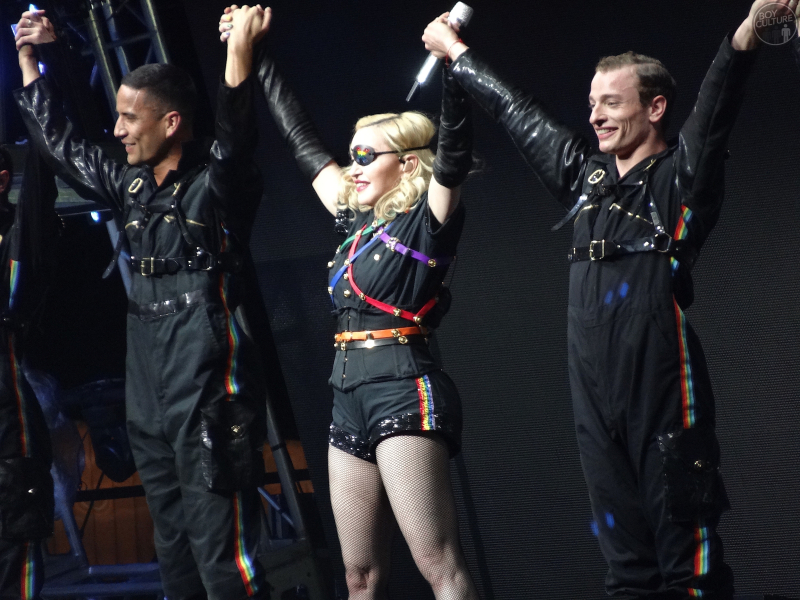 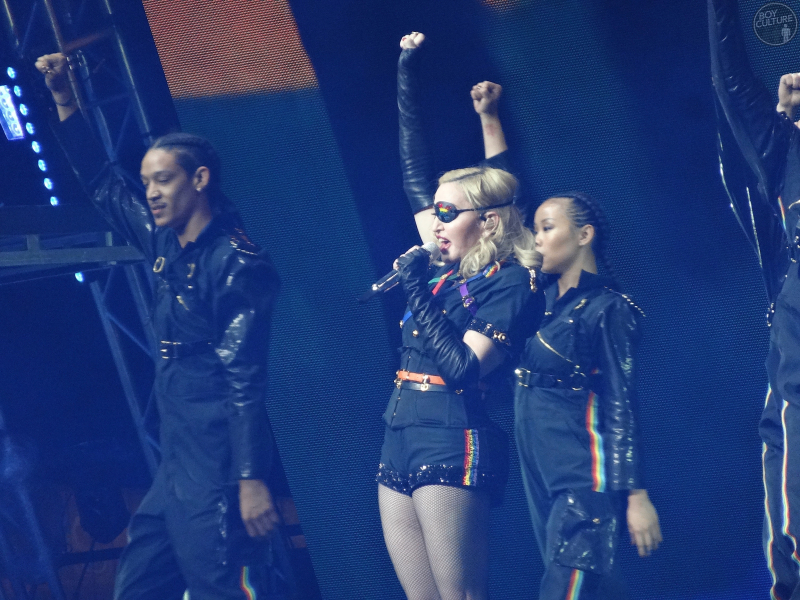 See you on tour!

Regardless, Madonna's short but sizzling time with us came to an end. She said she was sorry she hadn't rehearsed more numbers and didn't have more time, graciously thanked us and pranced offstage as fireworks erupted, right on schedule.

It was a winning appearance that was everything Eurovision was not, and it was a tasty appetizer ahead of her September tour launch.