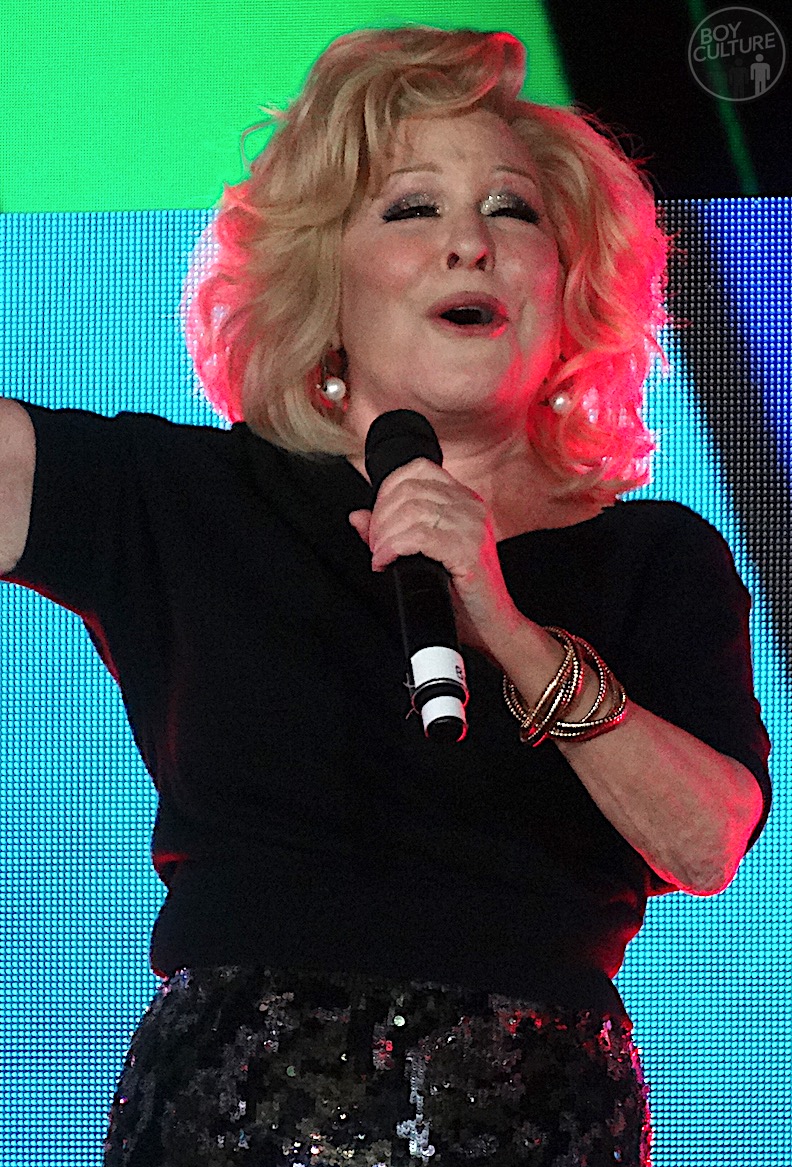 Bette was full-circle, from her bath days to singing for half-naked hedonists at Pride! (All images by Matthew Rettenmund)

The Pride Main Event at the Javits Center, held Friday-Saturday, June 28-29, is not exactly where you'd expect to find me — but had you looked early enough, you would've.

I'd never been to any kind of circuit party, but since this was the biggest one ever (11,000+ tickets sold) and was going to feature some interesting performances fairly early on, I went.

I really can't critique it intelligently because it was so 100% not my scene — everyone muscled to a fault, shirtless, hiding drugs in condoms under their balls, packed together and swaying without rhythm to soul-killing techno — that I wouldn't be able to tell you if it was a good one of these or a bad one of these. The people there seemed to like it.

I spent my time there terrified I would freak out in the crush of people, but wanting to get footage of Bette Midler (who had been announced to sing a song at 11 p.m.) and Cyndi Lauper (whose stage time was set at 12 a.m.). 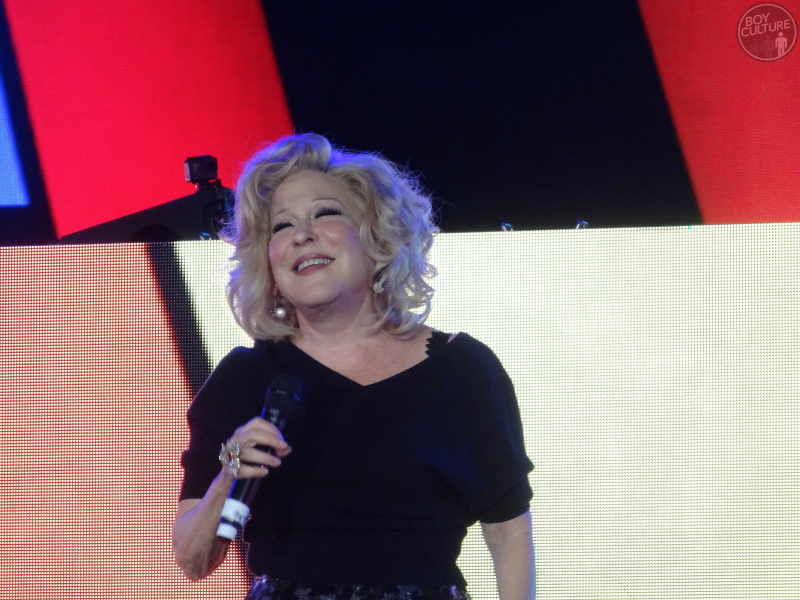 As videos were rolling of stars saying they were sorry they couldn't be there — and right in the middle of Cher's taped regrets — Bette came out, hollering, “Well, I can be here!”

She rehashed her Twitter war with Trump (of which most of the room seemed unaware), responding for the first time to being called a washed-up psycho by our dementia-addled Commander-in-Whaddya-Call.

She said, “I was very surprised to be invited here tonight ... because just two weeks ago, I was a washed-up psycho. I believe I've recovered completely, and something I've learned from my president's lunatic attack ...” before launching into “Friends,” accompanied on the piano by Marc Shaiman. 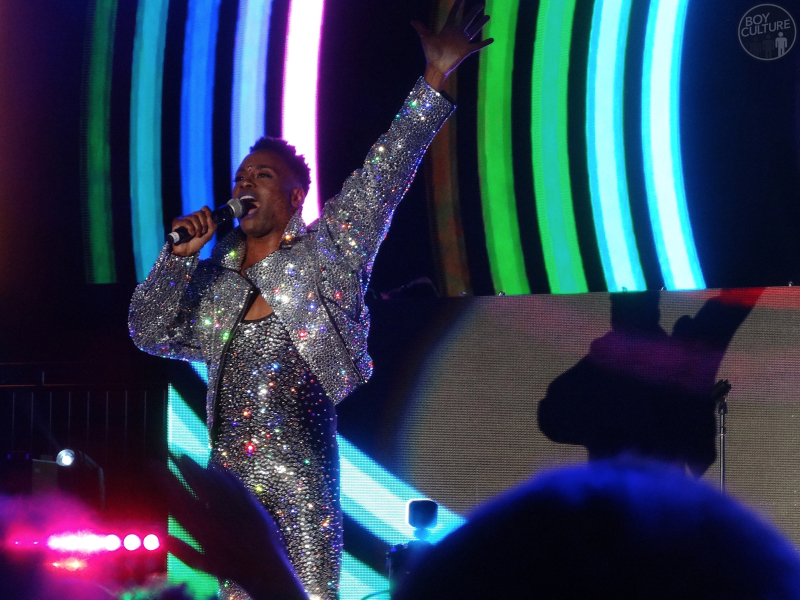 Then, Billy Porter streaked out in a sparkling suit and sang something — I have no idea what, but sang it well! One song, also. 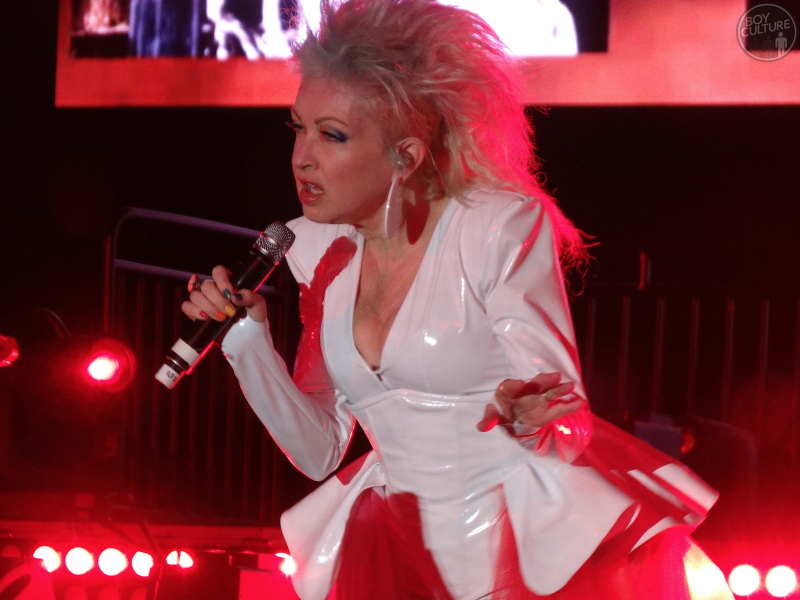 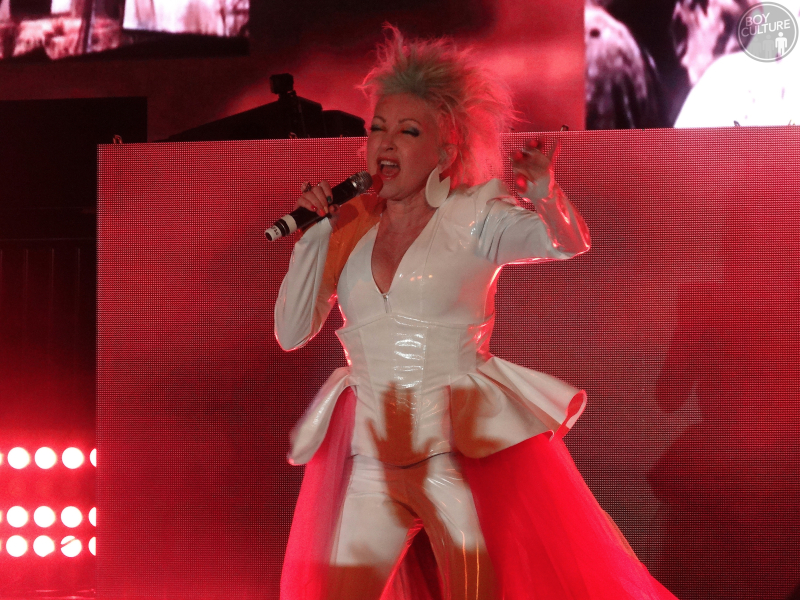 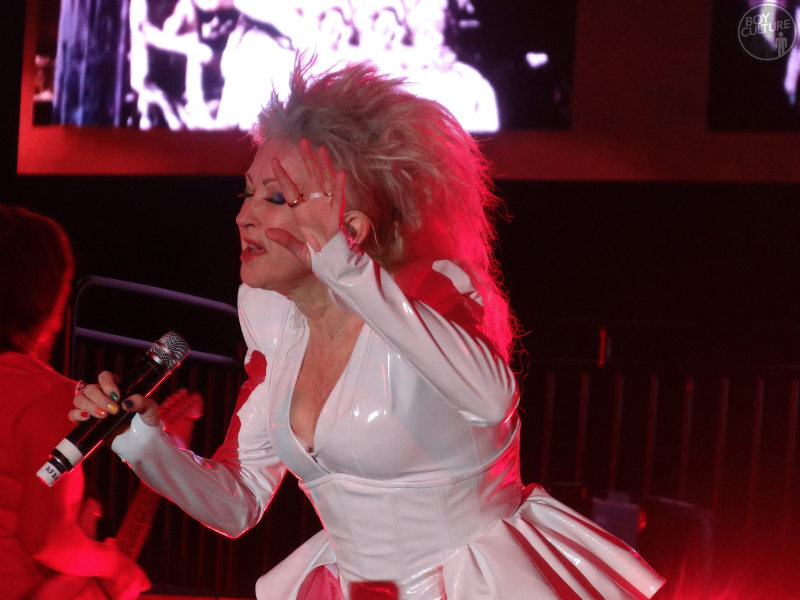 Finally, after a guy had his ass eaten out next to me, Cyndi Lauper came on and did a fun, if familiar, set that included “Time After Time,” “I Drove All Night” and, of course, “True Colors” (she did a techno version and appeared to have trouble keeping up). She was good, looked great, wished people well, and took off. I found it really amusing that a very young twink behind me sang all the words to her songs, while the older guys seemed indifferent. 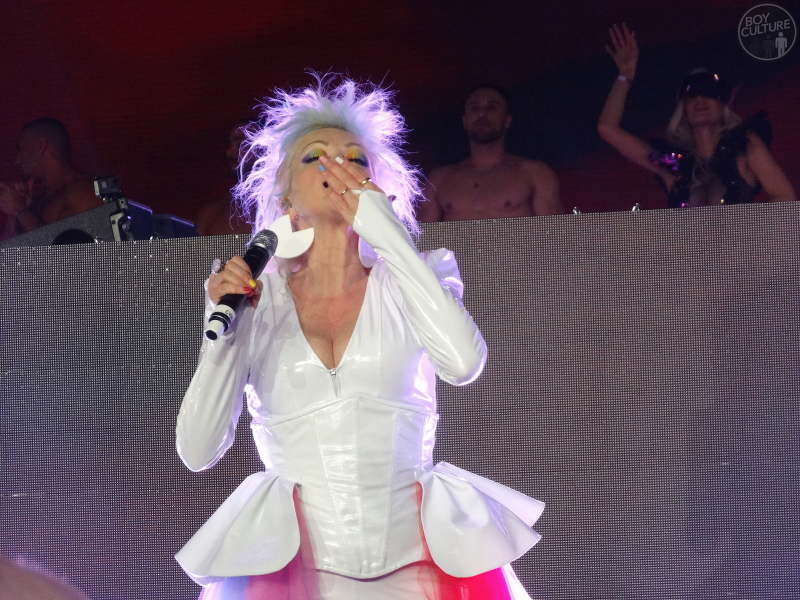 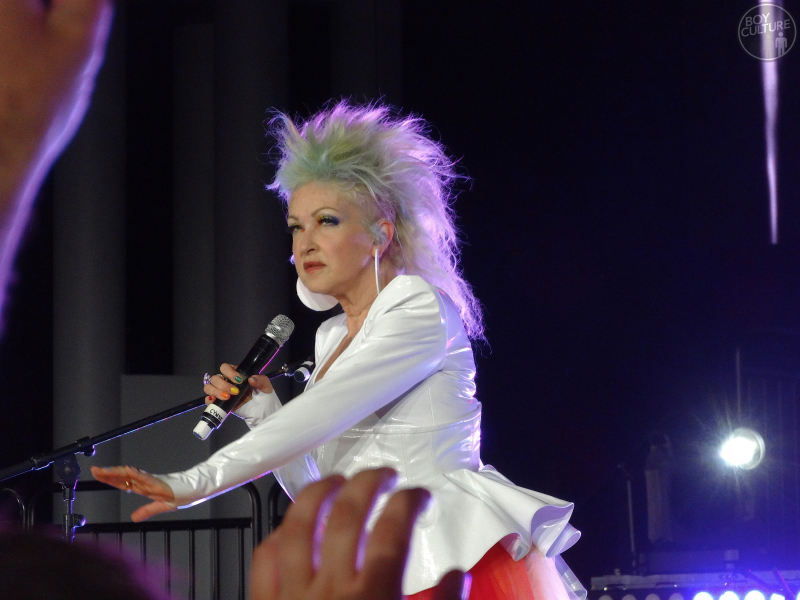 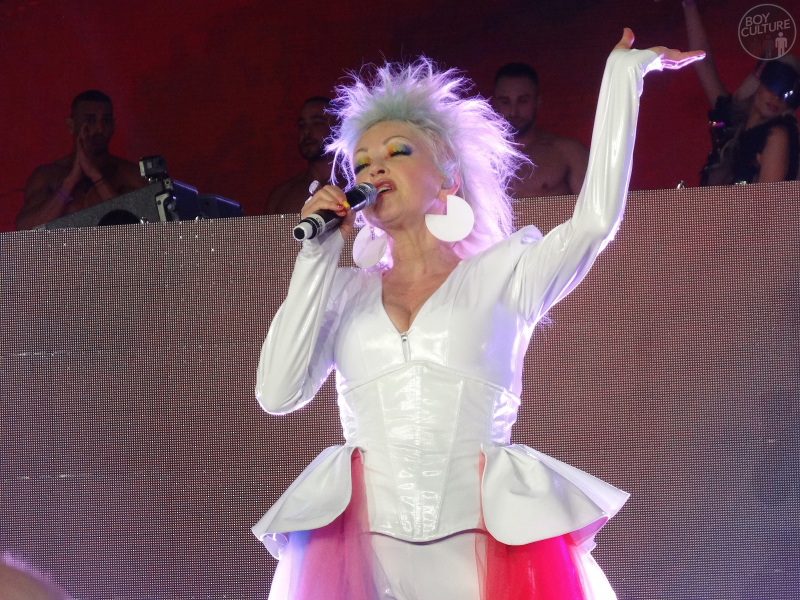 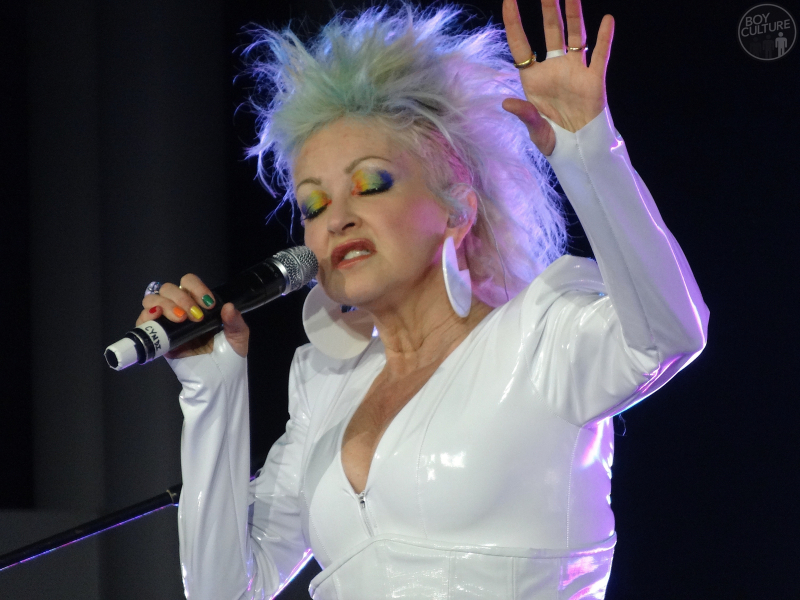 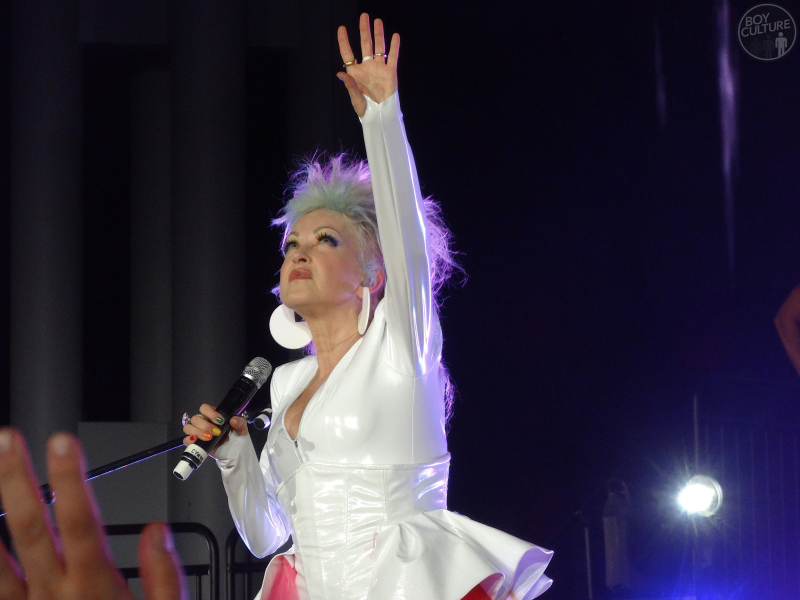 Her eyelids showed their true colors.

It was such a strange experience for me — very wham-bam. I left after Cyndi, even though Brandy, of all people, was supposed to go on. I don't know if she did or not!