ABOVE: Love his trunks.

BELOW: Keep reading for Lil Nas X on coming out (and on his past as an Internet troll), Trump's rained-out July 4th (and his blunder of historical proportions), how a gay biz handled an anti-gay note from a concerned citizen and more ... 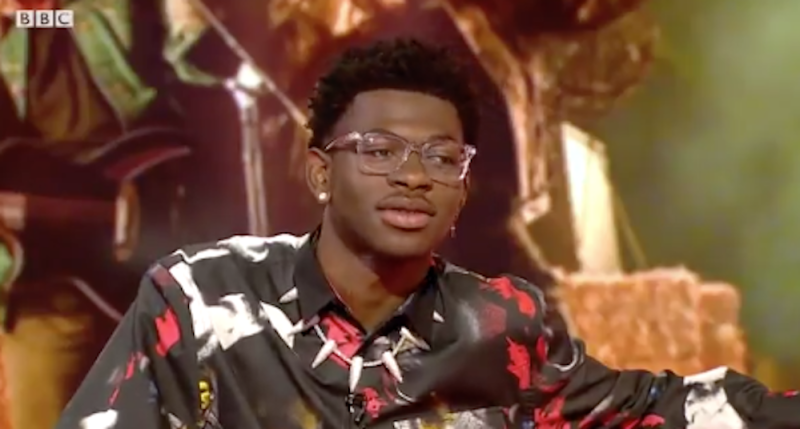 “It’s something I was considering never doing, ever. Taking to the grave.” — Lil Nas X (Image via BBC)

PITCHFORK: Lil Nas X, who is just 20 and already has a #1 hit (13 weeks in the pole position), came out at the tail end of Pride month. Now, he's talking about the decision, admitting he had considered never coming out and talking about some of the negativity he has received. I think he is a real hero — and I bet a LOT of people around him were encouraging him to keep his mouth shut.

THE GUARDIAN: Megan Rapinoe and other out jocks are uplifting sports.

AL.COM: The owner of Salon U in Homewood, Alabama, returned from WorldPride in NYC to find a note taped to the door, demanding that he remove the rainbow flag proudly displayed in front of his business. His response is, as they say, everything:

HUFF POST: Pete Buttigieg shut down a man who made a racist comment at a Democratic event, even though the comment was intended to support Buttigieg.

SHE-RO & A SCHOLAR: Trump's speech at his odious, rainy July 4th celebration (of himself) was a humdinger, one in which he asserted that there were airports in 1781:

"...our army manned the amports (?), it rammed the ramparts, it took over the airports..."

Trump slurring and then trying to read off a TelePrompTer about the Continental Army supposedly taking over the airports in 1781 is...no words. #TrumpSpeech pic.twitter.com/83Tv6vsN8x

TWITTER: Kamala Harris's impromptu speech to her overflow supporters before an event made no mention of Revolutionary War Airports:

@KamalaHarris addressing the overflow before her event pic.twitter.com/QzivHIsh2u

INDIEWIRE: We won't always have the Paris — the legendary, single-screen movie theater in Manhattan will shut down within about 30 days. It is the last single-screen, first-run theater dedicated to platform releases. I have seen quite a few movies there, and I recall seeing Barbara Walters standing in line for something hoity-toity. It's also where this amazing Madonna event occurred.

DEADLINE: The man who sued Kevin Spacey over an alleged 2016 groping incident has withdrawn his suit; criminal charges remain.

JOE.MY.GOD.: I used to know Dave Rubin, when he was a gay liberal talk-show host with a much nicer partner. I even interviewed him and he was grateful for the exposure. Then he veered right and now has a million subscribers to his YouTube hatefest, on which he has called for the destruction of the left, among other things. Baffling. Now, he's claiming that liberals — not fascists — are the ones who will come and destroy you if you're different.

When I interviewed Dave in 2013, he had this to say about his previous radio show, The Six-Pack:

We had one interview with a gay GOPer who kept telling us how great Ann Coulter was. It devolved into a shouting match and we never aired it. The point of the show was to be uplifting and fun, two words not commonly associated with Ann Coulter.

This was him two years later:

TRUE CRIME DAILY: Yes, the woman in Texas who

licked some Blue Bell Ice Cream before placing it back in the freezer is gross and should be punished. But 20 years in prison as even a possibility is insanity.