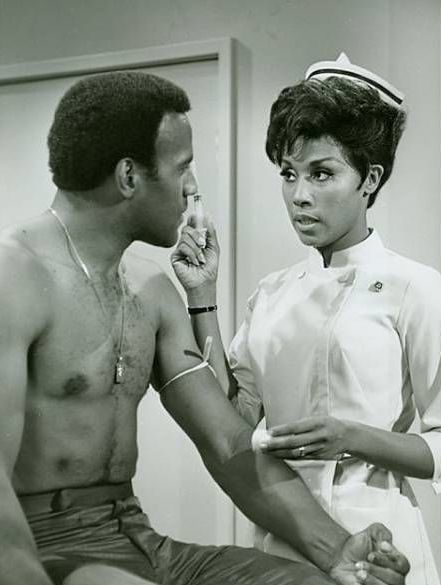 With Fred Williamson on Julia (Image via CBS)

Diahann Carroll, a trailblazing star who became a TV icon, died at her L.A. home Friday after a long battle with cancer. She was 84.

Born Carol Diahann Johnson in the Bronx on July 17, 1935, she grew up in Harlem, where she studied dance and took voice lessons. She was a model for such magazines as Ebony and studied sociology at NYU.

Television was very good to Carroll, and 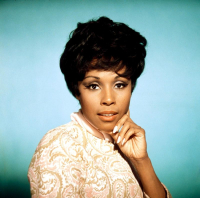 Carroll was very good on television. Along with dozens of guest appearances, she broke ground as the focus of the sitcom Julia (1968-1971), considered the first weekly series to feature an African American woman in a non-stereotypical role. As hard-working nurse and single mom Julia Baker, Carroll became the first black nominee for an Outstanding Continued Performance by an Actress in a Leading Role in a Comedy Series Emmy in 1969, and she won a Golden Globe the same year. The show was a breakthrough, but also weathered criticism for presenting what some felt was a suburban fantasy rather than a grittier depiction of the black experience in America

She also headlined her own TV variety special, The Diahann Carroll Special (1971).

Carroll was a vision. (GIF via GIPHY)

Among her many other TV roles, Carroll again achieved icon status as TV's "first black bitch," as she dubbed her Dynasty character Dominique Deveraux. She played the role to the hilt from 1984-1987 (including a season on the ill-fated The Colbys), reveling in the fashion-conscious chanteuse's rivalry with Joan Collins' Alexis. In a first meeting between the women, Dominique went for the jugular, dressing down Alexis and sniffing of the spirits offered her, "It's burned. This champagne was obviously frozen in the bottle at some point," going on to slam the caviar as well.

"I am just as tough as you — maybe tougher," Dominique warned Alexis, letting her know she'd met her match.

With Sidney Poitier in Paris Blues (GIF via GIPHY)

Carroll made an auspicious film debut in the groundbreaking musical Carmen Jones (1954), which starred Dorothy Dandridge and Harry Belafonte, and which was a rare big-budget mainstream film with an all-black cast. She went on to appear in such films as Porgy and Bess (1959), The Five Heartbeats (1991), and Eve's Bayou (1997). Her titular performance in the socially aware romantic comedy Claudine, a role she assumed when her friend Diana Sands became too ill with cancer to keep shooting, earned her an Oscar nomination.

An occasional presence on Broadway, Carroll's debut was in House of Flowers (1954). She became the first black woman to win a Tony for Best Performance by a Leading Actress in a Musical for No Strings (1962), the first musical by Richard Rogers following the death of Oscar Hammerstein. She also starred in productions of the revolving-cast shows Same Time, Next Year (1977) and Love Letters (1990), replaced Elizabeth Ashley in Agnes of God (1983), and took on the role of Norma Desmond in Sunset Boulevard (1995). She was no stranger to Las Vegas, and toured with her own cabaret act.

Diahann Carroll made history as the first African American in a lead role to win a Tony Award. Our thoughts go out to her friends and family. pic.twitter.com/SvOqQm6kHz

She was the author of two memoirs — Diahann (1986) and The Legs Are the Last to Go: Aging, Acting, Marrying, Mothering and Other Things I Learned Along the Way (2008). 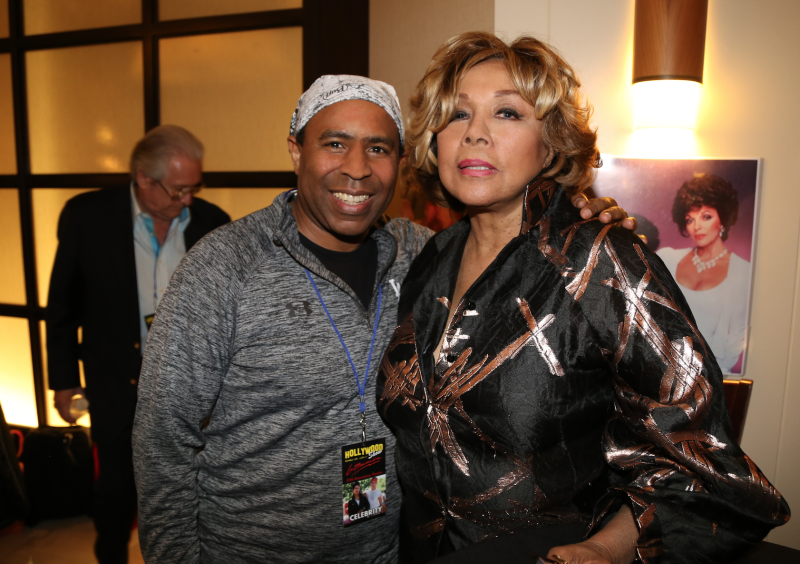 Carroll with Marc Copage, her Julia son, in 2017 (Image by Matthew Rettenmund)

Along with long relationships with British TV host David Frost and Oscar winner Sidney Poitier, Carroll was married four times, including her last, to singer Vic Damone, from whom she was divorced in 1997 and who died last year.

She is survived by her daughter, Suzanne Kay, who is a producer and journalist, and by her grandchildren, August and Sydney.

I was pleased to meet Ms. Carroll in 2017. She was gracious and lovely, as one would expect. But my friend has the best Carroll story — he sat next to her and her good friend (in real life) Joan Collins at a '90s performance of The Waverly Gallery starring Eileen Heckart.