On the same day Sen. Lindsey Graham (R-South Carolina) breathlessly endorsed Trump's sickening analogy that his impeachment is like a lynching, it is now reported that the 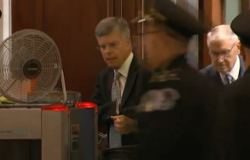 senior U.S. diplomat in Ukraine (William B. Taylor Jr., pictured in a video still) has testified that the release of military aid was, in fact, contingent upon public declarations from Ukraine that it would investigate the Bidens.

Now, it remains to be seen how many Republicans in the Senate will decide the law and ethics and national security are < their party mollifying Trump and his Neanderthal base.