Diss Of The Spider-Woman: Remembering 1977's CURSE OF THE BLACK WIDOW Comments (0) 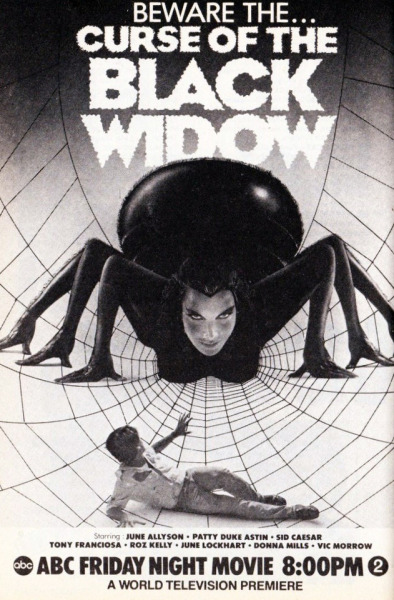 If you've never seen Curse of the Black Widow, a preposterous made-for-TV movie from 1977 starring IMDb and a bitch of a giant arachnid, you're anything but superfly. 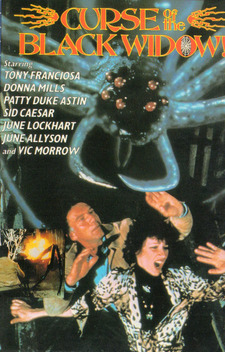 I saw Curse of the Black Widow as a little kid, and it captivated me as it spun a twisted monster story charged with sibling rivalry, multiple-personality disorder and — oddly — broad comedy. The thing winks so hard it pulls an eyelid muscle, and yet to a child, it was enough to make me a'scared of spiders forever and ever. 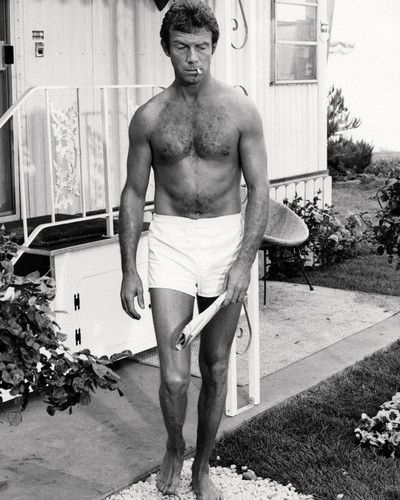 Tony Franciosa, who transformed into a zaddy with each full moon

Directed by Dan Curtis (1927-2006) of Trilogy of Terror (1975) infamy, because of course it was, Curse of the Black Widow stars virile Tony Franciosa (1928-2006) as P.I. Mark Higbie, who happens to be present at a bar when a mysterious voman vith an accent asks a fellow patron to help her out with her car — leading to his grisly murder. Higbie and another bystander (Michael Delano, b. 1940) find the guy's dead body, sporting two giant puncture wounds to the chest, and in the process see ... something ... something moving quickly away from the scene. 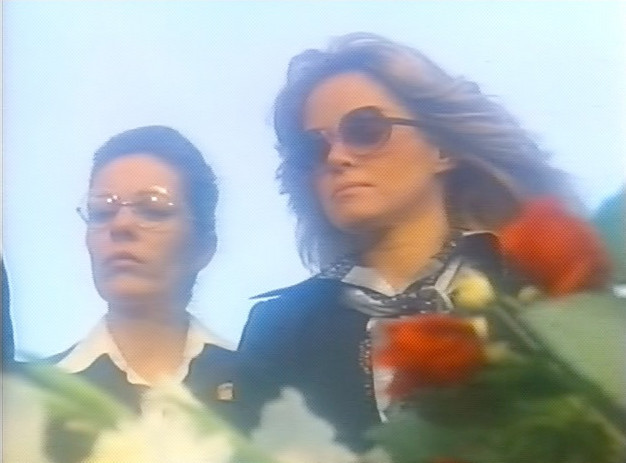 The dead man had been (you should pardon the expression) killing time at the bar waiting for his fiancée, lovely Leigh Lockwood (Donna Mills, b. 1940), whose alibi for why she never showed was that it got, um, foggy out so she, um, pulled over to nap in her car. Leigh hires Higbie when it becomes clear the cops suspect her, and the cops' suspicions seem prudent when it turns out several of her other boyfriends were found dead with similar puncture wounds. 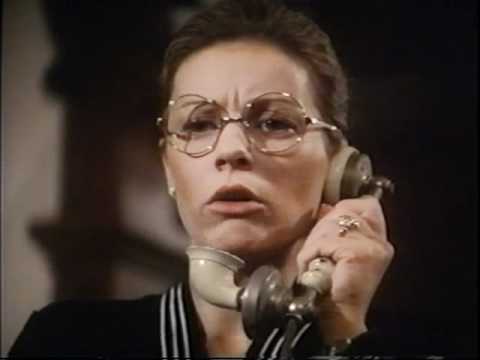 Digging his fangs deeper into the case, Higbie — with the help of his (shouting!) co-worker Flaps (Roz Kelly, b. 1943) and Ragsdale (Max Gail, b. 1943), a cop looking into a series of similar murders — discovers that Leigh Lockridge has a sister, Laura (Patty Duke, 1946-2016), and that as newborns, they were in a plane crash with their parents that killed their dad. 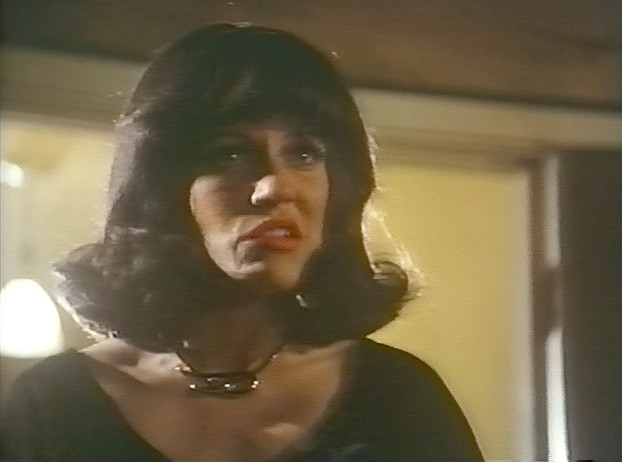 Madame X is a spider.

A visit to an obviously smitten coroner (Robert Nadder, 1935-1995, who you will recall as the man who took the Brady family portrait on The Brady Bunch) turns up the info that the murder victims were drained of blood, and that there was spider venom in their bodies. Another visit, this time to a reluctant witness to a previous murder (wrestler Hard Boiled Haggerty, 1925-2004), confirms what Ragsdale has been hinting at to Higbie: The killer was a giant spider. 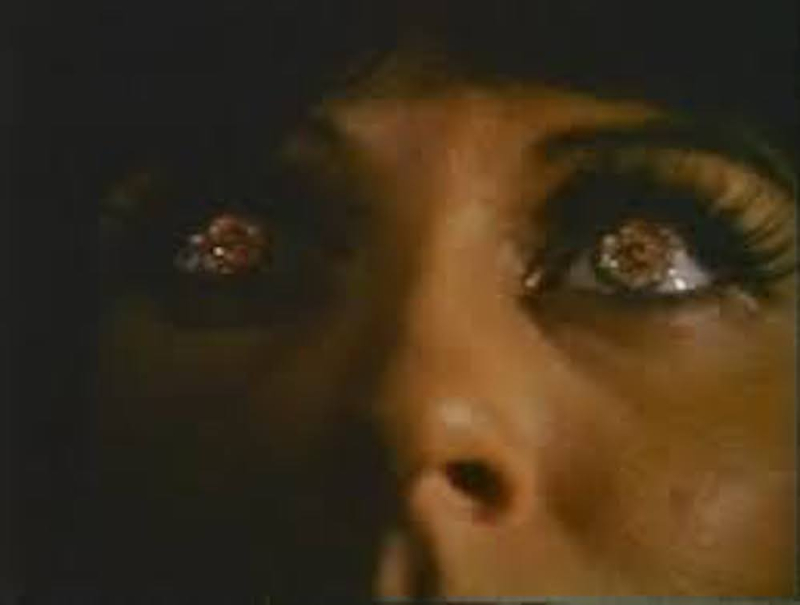 We only ever see the spider-woman transform via her eyes.

Flaps, who spends most of her time in the office complaining that the thermostat is imprudently too high, is the one who discovers an old article that reveals one of the Lockwood girls was covered in insect bites following the plane crash — but which one? The plane crashed into a vineyard owned by the Lockwoods (natch), and an old Native American caretaker Higbie finds there (real-life acting coach Jeff Corey, 1914-2002, a Jew playing an American Indian) sheds some light on the legend of women who, during times of stress and during cycles (ahem) of the full moon, turn into giant spiders. He also confirms one of the girls was covered in spider, not just insect, bites ... but he only saw them as infants, so has no idea which.

While Higbie attempts to untangle the web intended 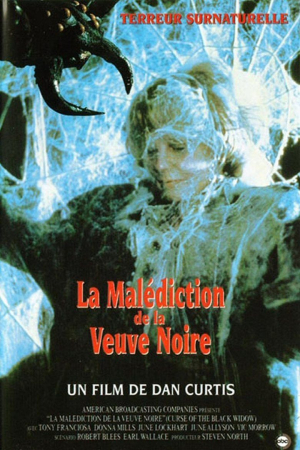 to deceive, Leigh and Laura's odd homelife is delved into, revealing Laura to be an uptight type and Leigh a golden girl. They're looked after by a well-meaning former nanny, Olga (June Allyson, 1917-2006, whose cobwebbed face served as the DVD box cover in some regions). She also keeps a watchful eye on Laura's secret daughter Jennifer (Rosanna Locke, b. 1964), who is under the impression her mother is dead and that Leigh and Laura are her aunties.

On a hunch, Higbie phones Laura and asks which twin had the spider bites, and Laura confesses it was Leigh. He tells her to get out of her home and hide for a night. As she's packing, Laura freaks out (full moon and all) and transforms into the woman with the accent — she was the split-personality-prone, spider-bitten killer all along. She takes care of backstabbing Olga, who had planned to turn her in, but goes easy on Jennifer. Leigh arrives and discovers that their mother (June Lockhart, b. 1925), who she had thought died years ago, has been kept hidden in a private room, suffering from PTSD. Finally, the sisters confront each other, and it is revealed that mousy Laura was using her sexually aggressive alter ego to come on to all of Leigh's beaus, transforming into a man-killing spider when she was turned down. One of the boyfriends wound up raping her before becoming a meal, which resulted in Jennifer.

Mom, what did you and Dad do on your first date? Had a bite.

Turning into a spider, Laura scares her mother so badly she falls to her death out the window, which almost makes Leigh flinch. 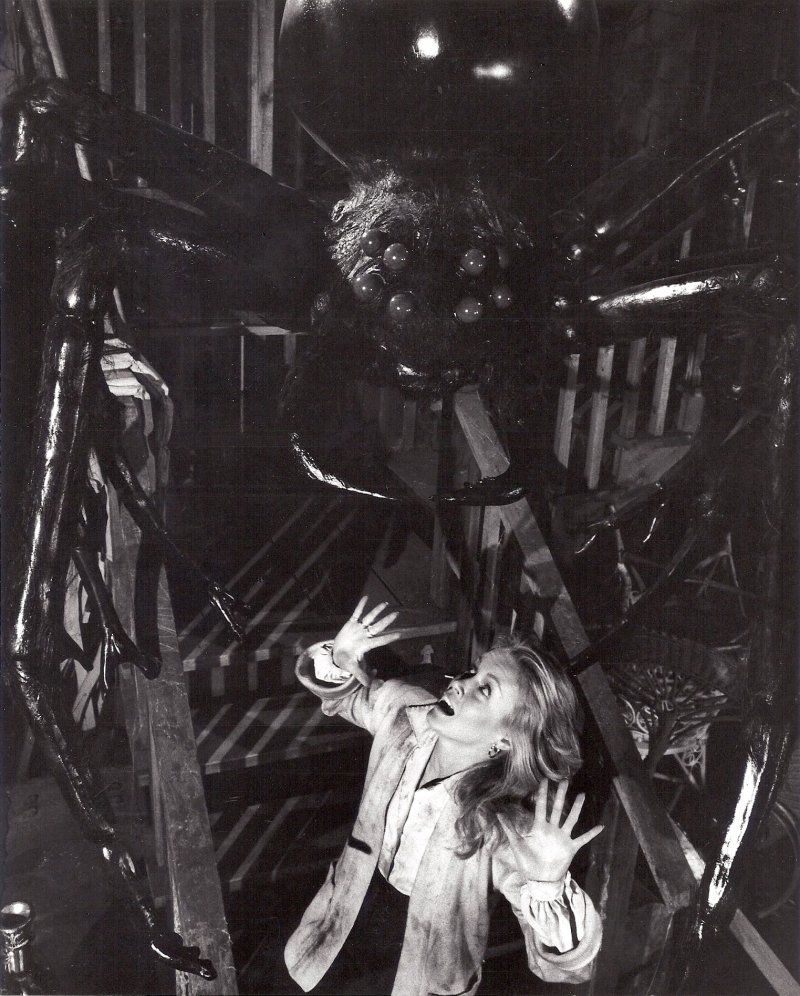 Think you have a hard time getting along with your sister?

Higbie arrives to find Olga's drained corpse and frees the still-living Leigh from a web. When the spider attacks, he's ready, torching it and saving the day.

In the end, Higbie and Leigh seem to be setting up (beach-)house, with Jennifer happily frolicking in the surf. In spite of the incredible events, Leigh is happy to try to forget the whole darn thing ... but the camera reveals Jennifer has a black widow marking on her underbelly just below the bikini line. Dunh-dunh-DUNH.

improvised at times, but has so many crazy things to recommend it — Sid Caesar (1922-2014) as a random pimp, a special guest star credit for Roz Kelly, Patty Duke (so far from her Oscar she has to FaceTime it at night) chewing the scenery as well as several hapless victims, Donna Mills looking serene whether discovering her fiancé was drained of blood or learning her dead mom is alive (and about to die again), '70s-TV special FX that lay a spider egg, the director's daughter performing a totally unnecessary gymnastic stunt, June Lockhart giving an actually terrifyingly effective performance as a woman who knows her daughter has eight legs.

Lucky for you, someone posted the whole damn thing on YouTube: